Years ago, when I went back to school, as an older and nontraditional student, I joined a certain friendly society on campus, and, after our Thursday night meetings, it was tradition to walk as a group over to Peppino’s. This is when it was still downtown, on Broad Street, and usually just getting warmed up for the night around 10 in the evening.

Now, Peppino’s was always worth a visit in those days, because the owner, Joe Cortese, was such a trip. He’d call out a number when somebody’s order was ready, and not give them very much time to get to the counter before calling them a second time. Another thirty seconds and the abuse would start. “NUMBER 34! WASSAMATTAYOU?! YOU WANT THIS PIZZA OR NOT?!” People in the know would sit back and relax, let the screaming escalate, enjoy a good chuckle, and, after a couple of minutes, rush to the counter with apologies, lying about how they’d been in the restroom.

It took about three trips to Peppino’s in the company of my new friends and acquaintances before the first person came to me with a little flush in their face and a ten in their hand to quietly ask whether I’d be so good as to buy them a pitcher. Tsk. Look at that. Buyin’ beer for minors. There oughta be a law against it.

I was very surprised, and thoroughly mistaken, when Peppino’s moved from its venerable downtown home to a most bizarre location south of the city, way out where Milledge dead-ends into Whitehall Road. I said that there’s just no way, surrounded as it was by herds of cattle monitored by the agricultural school on one side, and hundred year-old cheap country housing on the other, that any restaurant was going to thrive out here. Yet more than a decade later, Peppino’s is still the only restaurant in any direction for a couple of miles, and it quietly does its job, serving cheap pizza by the slice and all the other expected Italian-American traditional things. It might be joined by some more retail business one day. I read that the Dollar General people want to build a store over here for some fool reason, but for now, it’s a quiet and lonely building with a busy parking lot.

The toddler and I had dropped Marie off at the movie theater with her friends and he immediately went into meltdown. He wanted his mommy and it took him the better part of half an hour to stop blubbering. We spent much of that time in Peppino’s parking lot as the rain poured down. I would read a chapter of my book and ask whether he was ready for some pizza, and he’d mumble-grumble-whimper “No!” and I’d read another chapter and ask again. Eventually, he brightened up, and we went in for their lunch special of two slices and a soda for $6.55. I asked them to slice each in half so that he could try both the traditional New York-style as well as their big, thick Sicilian with me.

I took some pictures of our slices, but they came out completely terrible. That’s because the interior of the restaurant is resplendent in pink neon and looks like this: 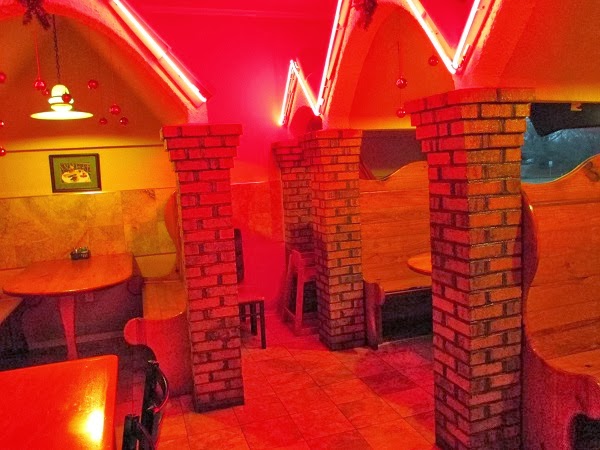 I later figured out that I might have taken a better shot had I stood several feet away from the table, used a flash and zoomed way in. They had a little Christmas display, with a representation of their own building, and that turned out presentable. 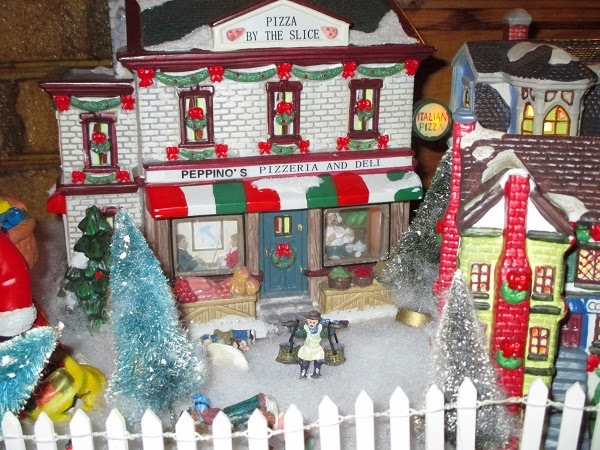 It’s not an accurate representation of the actual building, however. It really looks like this: 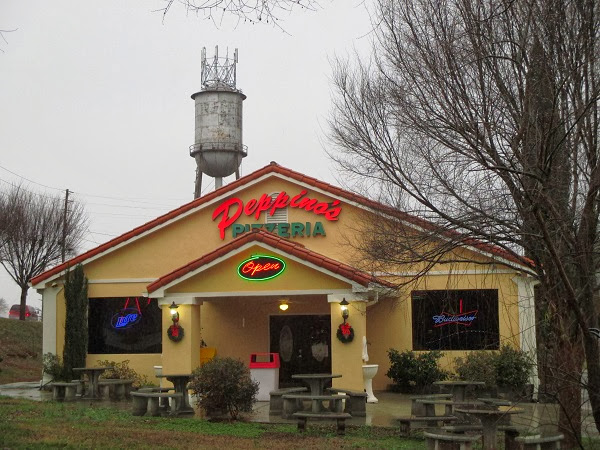 Joe owns several restaurants in several towns around the southeast, usually trading under the names Little Italy or Peppino’s. I’ve never quite understood the logic of using the different names myself, but you can get reliably good slices and service at any of them. His pies are made using Grande cheese, and he has a lot of advertisements for that brand around his shop. The pies are – and I’ll walk a fine line saying this – made in what southerners consider to be the New York style, without in any way impressing anybody who has lived and eaten pizza in New York. I think that they’re just fine, but I’ve never once set foot in Brooklyn.

The toddler ate most of his thin slice and a bite of his thick slice and was ready to play. He had a most curious game in mind. We left our table and took our plates to the trash and he went to a booth, patted the seat next to him, and said “Train song, Daddy.” I sang my usual three verses of “Folsom Prison Blues” and he said “Move.” Then he went to the next booth and repeated. When guests whom we had walked around finished their meals and left, we went back to their vacated spots. Twelve performances later, we were finally ready to brave the rain again.

We spent most of the rest of the afternoon dry and warm in the impressively large children’s section of the public library, where he had an awesome time and we read many books together, before meeting Marie and all our friends who’d seen the movie together. We didn’t get the chance to visit another new place, as the vote was for one of those Golden-This-Happy-That all-you-can-eat buffet places. This one had an aquarium to keep the toddler amused. Marie ate to be social; I remained on Baby Wrangling Duty because I wasn’t going to eat that stuff.

A good while and a half later, we made our way out of town and stopped by the new location of Cook Out for milkshakes. This North Carolina-based chain has finally made inroads into Georgia. The first store is in Statesboro, and this is the second. It’s in Oconee, on that “still-new-to-me” stretch of 316 where the Home Depot and Lowe’s and Kroger are set up. It was completely packed! 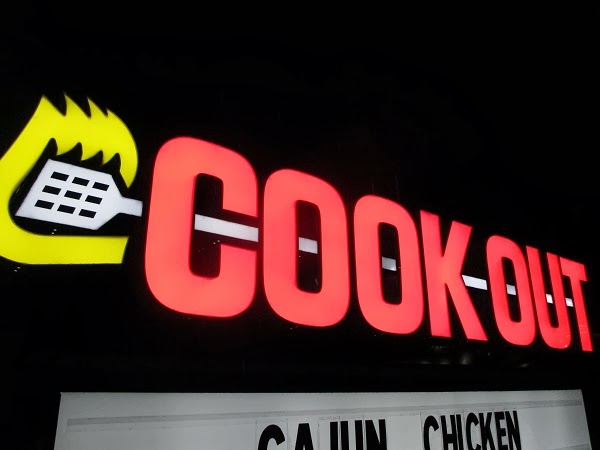 The sun had gone down, and it was raining buckets, and so that’s all the picture you’re going to get. I was quite surprised to see the place so crowded. The drive-through was wrapped around the building, all the tables were taken, and there was a line back to the door. Even accepting there’s the novelty of the new place in town, I was really impressed by the crowd. I got a chocolate cherry shake for Marie and a cherry cheesecake for myself. The girlchild grumbled, when we returned home, that we did not bring her one.