So I started putting this trip together late last year. I planned and replanned and mapped and mapped again. I was totally happy with the itinerary and printed out all my directions. The morning before I was set to leave, I took one last look at Google Maps, zooming in with street view to give me a good idea at what was around each of the destinations. I noticed that my planned final stop, Stamey’s in Greensboro was across the street – literally – from some big coliseum or other. I figured that I should probably check whether there might be a concert that Friday evening. It would help to have some advance notice of a Widespread Panic show or somebody causing traffic backup.

Nah, it wasn’t a concert. Just the ACC Men’s Basketball Tournament, pumping $20 million into the Greensboro economy. I cussed and spat – you may recall from previous chapters that every time I make one of these trips, it’s either the last place on day one or the first on day two that I enjoy the most, and Stamey’s looked set to keep the streak going – and looked around for some place other than Greensboro, but not too far away from my hotel in Winston-Salem, that sounded promising. I’d originally thought that Short Sugar’s in Reidsville was too long of a drive, but it turned out to only be a twenty minute detour. I decided to fight the sunset and race to get there while I still had some light; that made more sense than overpaying for parking and waiting an hour for a table. 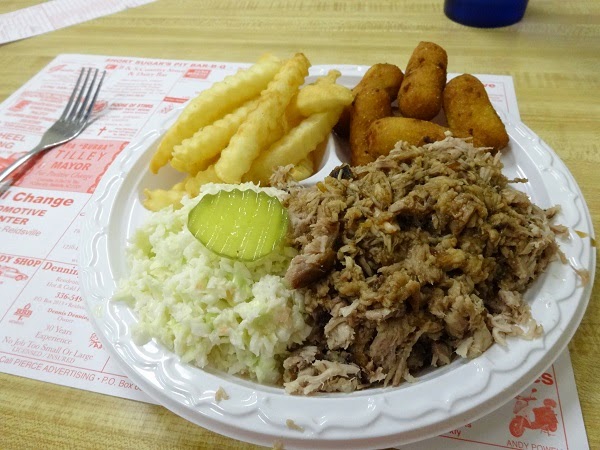 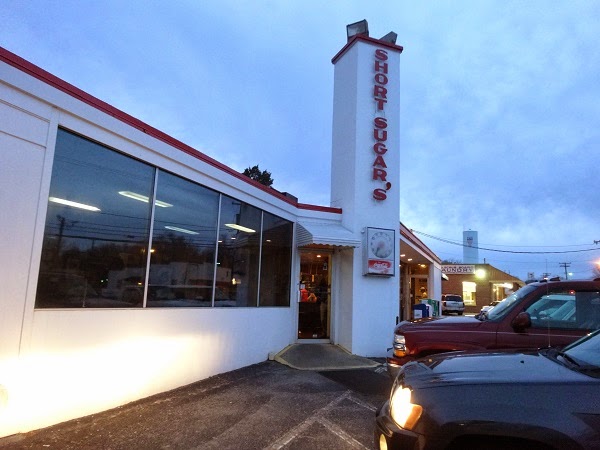 This building does not have a canopy, but it was originally designed as a drive-in restaurant, and still offers curb service to those who would like it. In 1949, brothers Johnny, Clyde, and Eldridge Overby were preparing to open their Overby Brothers Drive-In, but Eldridge was killed in a traffic accident two days before opening. Johnny and Clyde renamed the business after their late brother’s nickname, given him by his sweetie. And speaking of sweeties, this is a really unusual barbecue sauce. There is probably vinegar, and just a little bit of either ketchup or tomato, and also Worcestershire sauce. In consistency and color, it’s not very unlike the Hudson’s-style sauce seen in Atlanta’s western suburbs, but this sauce is much sweeter. Some writers peg it as honey and some as sugar, but it’s certainly sweet and very surprising. Drizzled over chopped pork shoulders – started on an electric smoker and finished over hickory wood – it is extremely tasty. 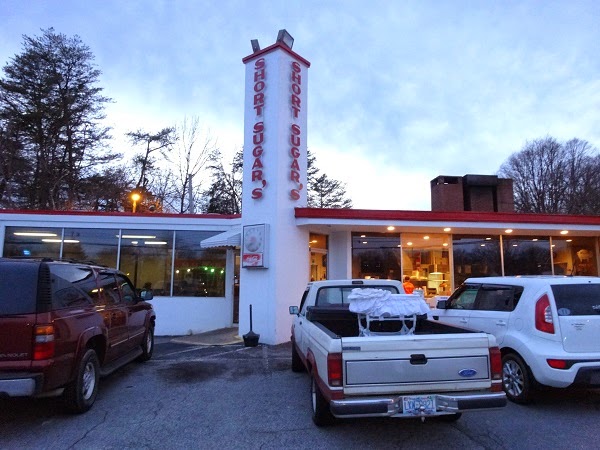 Unlike most of the other barbecue restaurants in the Piedmont Triad, Short Sugar’s offers a white, mayo-based slaw. I ordered a full plate instead of just a tray, not like I needed any more to eat, but I found myself wanting French fries. The service was impeccable, and I absolutely loved the old diner feel of the interior and the barbecue was definitely one of the trip’s high points. It tasted amazing.

Johnny, Clyde, and a fourth brother, Donn, have all passed away, with Donn dying earlier this year. Four days before I arrived, Biddie Overby, Johnny’s widow, also passed. Johnny and Biddie’s daughter married David Wilson, who owns the restaurant today with his son John David managing day-to-day business. (The Southern Foodways Alliance interviewed them in 2011, which you should go see.) It’s always great to see a business still in family hands and serving really good food after 65 years.

In fact, the only thing that I wish the Wilsons would do differently, the next time they need to do any work on the parking lot, is make the spaces a little wider. I enjoyed joking around with two other guests when I was leaving, all of us squeezing into our cars and hoping not to ding each other’s, about how they apparently expect everybody to pull up on bicycles. Considering that everybody’s car was “as big as a whale” when this place was built, I found that a little funny.