I stayed the night in the Bates Motel. Don’t take my word for it. After I returned, I was asked by Expedia to review the hotel, and I was pleased to note the lack of wi-fi and a room fridge as had been advertised. Three of the ten previous reviews mentioned the Bates Motel. And you thought it was on the west coast. None of my other, affordable choices had been available, since the ACC Tournament did a number on room vacancy throughout the Triad. So there’s the plus side to dropping Stamey’s from my itinerary: I finally figured out where all the decent hotel rooms in Winston-Salem had got to.

I had to throw out my leftovers, as there was no way to keep them cool, and woke hungry and thirsty with only a half-cup of lukewarm tea to drink. So at 6.30, I left to find some breakfast. I’d noticed a lot of billboards and signs on the previous day for a chain of fast-food breakfast places called Biscuitville, and there was one about three miles away on Reynolda Road.

I sat down with a local newspaper and a chicken biscuit which was not bad at all. I only ate enough of it to kick the edge off my appetite, but what I ate was tasty. It’s a good, bright, clean place with a welcoming, happy staff, exactly what I wanted to get my day started. As I read, I barely noticed the local TV news out of Greensboro, but heard the anchor mention “Stamey’s Barbecue” and looked up. Stamey’s was the place that I’d planned to visit the night before, but chose to reschedule after realizing it was across the street from the coliseum where all that basketball was being played. The feel-good report was about the crazy lines for food at the venerable restaurant, with lines stretching down the street. I sure did miss trying them, but I’m glad I didn’t get caught up in all that! 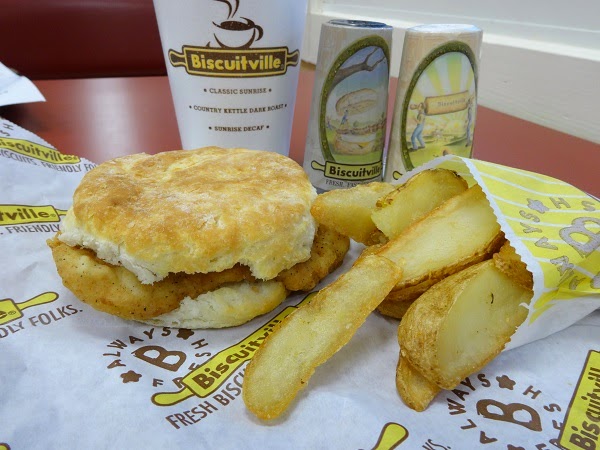 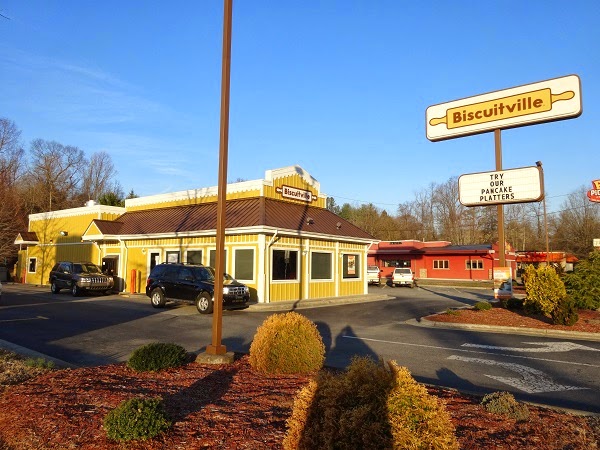 After breakfast, I drove around a little. I went past Wake Forest University and the cute West End neighborhood, and parked downtown to get a tiny bit of exercise, walking around the city blocks for almost two hours. It’s not the prettiest of downtowns – the Hiram H. Ward Federal Building is just the epitome of 1970s municipal ugly – but it’s not troubling or scary, either. Winston-Salem seems like a good place to go at an hour when the record stores, wherever they are, are open.

A little after nine, I made my way to Hill’s in the northern part of town, and, oddly, just down the road from the Bates Motel. Joe Allen Hill opened the restaurant in 1951, and decided to take the credit for his store serving the original Lexington barbecue. How he got the cheek of using that term when Stamey had been smoking for about a decade before was basic marketing. None of the barbecue restaurants in the town of Lexington were calling themselves “Lexington barbecue.” His was the original use of that phrase. Win on a technicality, that. 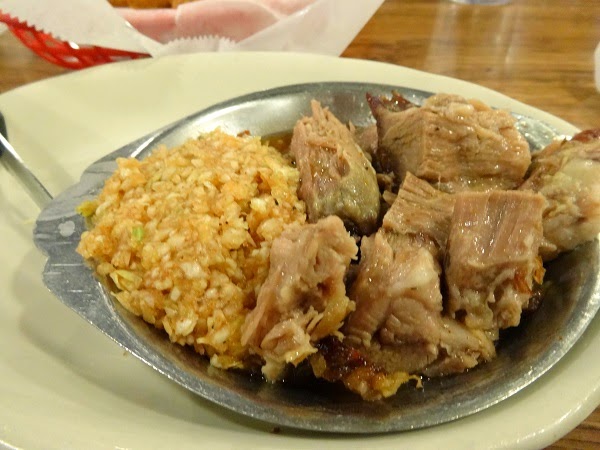 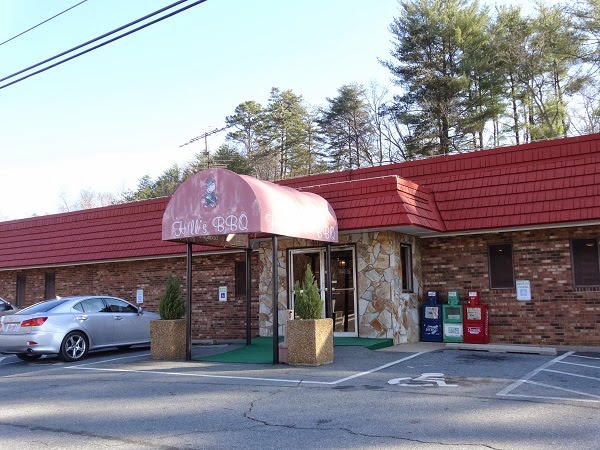 J.R. Hill, Joe Allen’s grandson, is in charge today. The very large restaurant was about half-full when I visited, and all the tables that I saw had people enjoying large country breakfasts. I double-checked with my server that they did indeed serve barbecue this early in the morning and sat down to a tray with one of their specialties. Most of these joints in the Triad, you can get your meat chopped, or coarsely chopped, or sliced, or minced, but Hill’s is one of the few to offer the meat “blocked.” These are sometimes described as “pig-pickin’-style” and come as large cubes of very tender pork that just melt away at the touch of a fork. They come in a bath of the expected vinegar-tomato sauce and are incredibly flavorful.

Hill’s is also just a little bit up the rung in the quality of presentation than your basic no-frills barbecue joint. Here, for example, they don’t serve trays in a paperboard boat, but in a little tin bowl. They have nice tables and silverware, none of the mismatched chairs and booths from a penny-pinching startup. J.R. Hill’s customers seem to be mostly older locals. Have Wake Forest students just not found this place?