Most of the restaurants that I visited on this trip were older joints. The youngest of them, by many years, was Sauceman’s, which opened in early 2010. This is a restaurant formed by a competition team that surprised me with their tactic. They smoke shoulders, Lexington-style, and serve in the tray option like most of the restaurants in the area do, but they don’t actually offer a Lexington-style sauce to go along with it. They have three: an Eastern NC vinegar-based sauce, a sweet tomato-based sauce like we see a lot of in Georgia, and an Upstate/Piedmont South Carolina mustard-based sauce.

I arrived shortly after three and joined a great big crowd in their small space, finding the last available seat indoors. On one TV, NC State was taking the court to get beat by Duke, and on the other TV, I saw my first and only glimpse all weekend of any suggestion that there was any basketball in the world other than the ACC. Georgia’s defeat by Kentucky left a bad taste in my mouth when I read about it later, because I saw the beginning of that game, and while nobody’s got a home court advantage in these tournaments, it’s just a little ridiculous that Philips Arena’s crowd should have been about 90% blue when Athens is just a dang hour up the road, y’all. Where the heck were our students? Tsk. 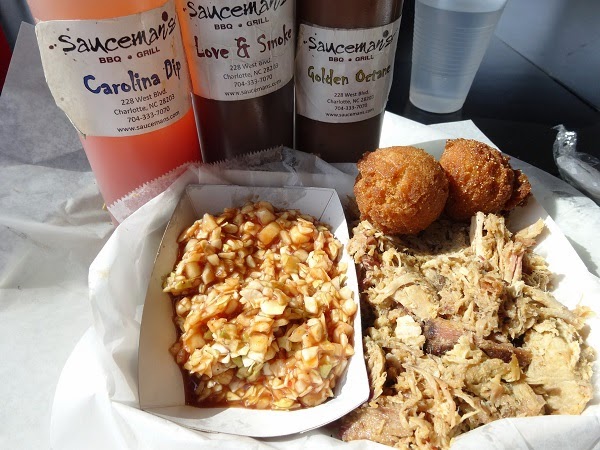 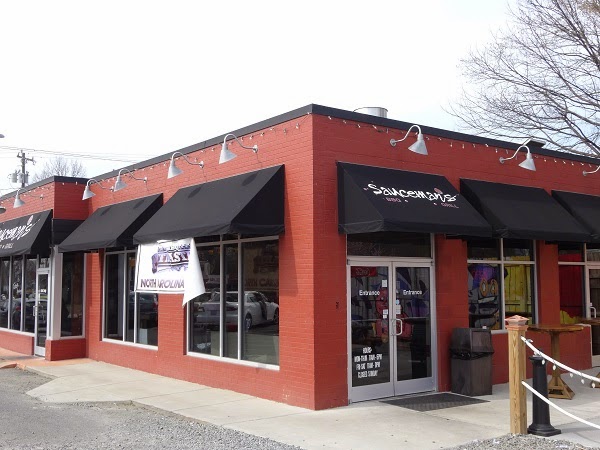 So anyway, the barbecue at Sauceman’s is very, very good. This was my final order of red slaw for the day, and I was pleased that this tray came with pork and slaw separated into two separate cardboard boats. The slaw was delicious – they also offer a white slaw, but we’ve too much of that back home for me to give up on this fun local specialty – and the pork was really great, rivaling the meal that I’d had at Carolina in Statesville a few hours previously. The prices at Sauceman’s are a little higher than the older joints in the smaller towns, but the $7.50 tray is actually a great deal overall, and you get a lot of good food.

Speaking of older joints, one of the two small dining rooms at Sauceman’s has an absolute must-see treat on a wall. I wish, I wish, I wish that my photos of it had turned out legible. It’s a family tree – or, more accurately, a “briar patch” – of Lexington-style barbecue scrawled on one of the walls, with “weeds” showing whose work begat whose restaurant, where people got their starts and their inspirations. The lineage of people like Stamey, Conrad, Monk, and all their peers has been quite thoroughly documented by writers who have spent much more time in the region than me, but it was wonderful to see this scrappy young upstart paying tribute to all the celebrated restaurants that preceded it. It’s just awesome to be in a place that recognizes tradition this way.

Other blog posts about Sauceman’s BBQ: