So our spring trip was truncated from four days in western Tennessee to two days in eastern Tennessee. We started the road trip with the main destination, a very good restaurant that I’d wanted to visit for many years, but we weren’t about to leave the Tri-Cities area without a visit to a very neat little restaurant chain.

Before we get to that, however, we did a couple of other sightseeing things in the region, so we could honestly say that we didn’t drive all this way just to eat. First, we visited the town of Elizabethton to see their amazing covered bridge, and to give the toddler a break watching the ducks yell and poke at each other. From there, we drove to Johnson City’s downtown to visit the Hands On! Regional Museum and give him a couple of hours of play.

We always enjoy visiting children’s museums, and we had a great time at this one. In fairness, a couple of the exhibits could use a little TLC, but the staff was visible and happy and generally excellent, and they feature one of the neatest of any of the exhibits we’ve seen in any children’s museum. The space occupies two floors, and guests can either go downstairs via a conventional staircase in the back, or they can use the coal mine exhibit. This includes a terrific slide for children or a steep set of stairs. The downstairs “mine” has low ceilings and twisting little corridors. I was really impressed with that.

As our son wound down, we left and drove to a little stretch of State of Franklin Road alongside East Tennessee State University dotted with fast food joints. Next to a Wendy’s and a Cook Out, there’s a representative of the Tri-Cities’ unique chain, Pal’s Sudden Service. It’s been around since 1956 and most of their stores can truly be said to have the best buildings in the world of restaurants. 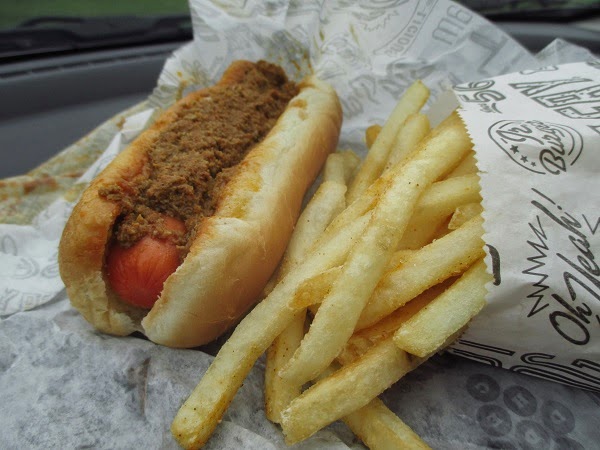 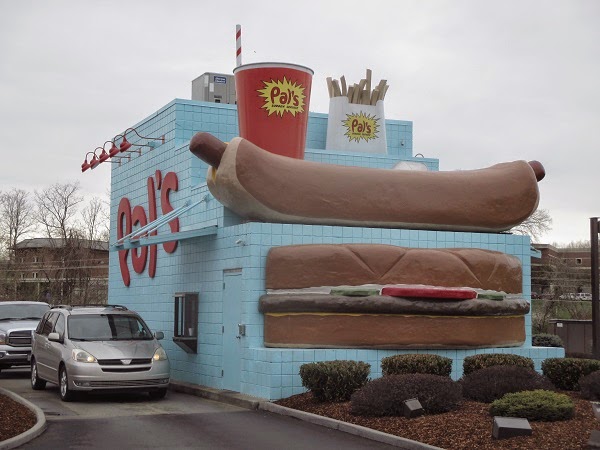 Fred “Pal” Barger opened the first Pal’s Sudden Service in nearby Kingsport in 1956. He was apparently inspired by meeting McDonald’s founder Ray Kroc and deciding that he could provide even better and more efficient service than Kroc was boasting. The fast food industry magazines measure all these metrics about speed of service and drive-through waits, and Pal’s Sudden Service wins in every category, every year. Now, personally, I couldn’t care less about those metrics, and I suspect that they aren’t high on your radars, either, dear readers, but that is what drives management at this chain: being flawless and being fast.

I’m much more interested in simply the existence of a neat little regional chain like this. There are 26 Pal’s stores all grouped around I-81 and I-26 in eastern Tennessee and southwestern Virginia. Almost all of them are in the Tri-Cities: Bristol, Kingsport, and Johnson City, and almost all of them have this lovable and silly blue box design with the giant food on it. There is no indoor seating at most of the stores; this one, like several of the others, is drive-through only. In a very neat twist, however, drivers don’t speak through a squawk box. You pull up to one window and speak directly with the order taker, and then circle the building and collect your food. 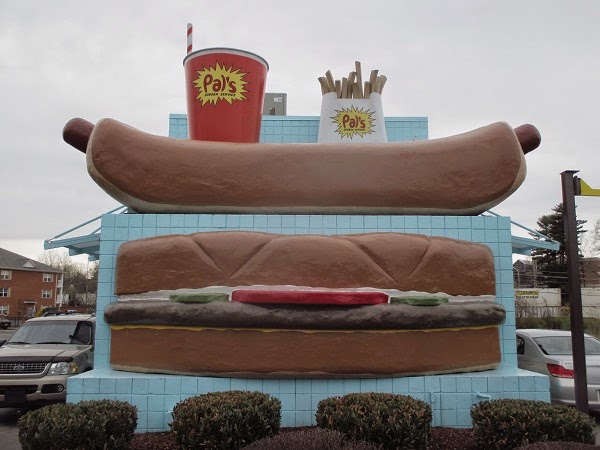 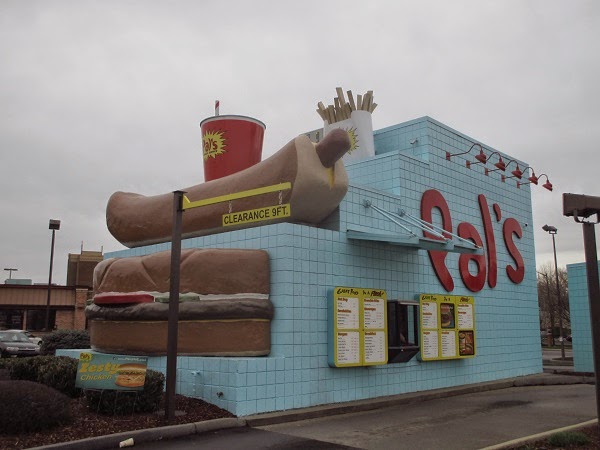 I have a great fondness for the Nu-Way chain around Macon GA and the Skins chain around Greenville and Anderson SC, but sadly, as much as I love Pal’s design and quirkiness, I didn’t think much of that chili dog at all. The plain dog got the toddler seal of approval, and the locals seem to love it, as the endless line of mid-afternoon cars demonstrated, but we can’t all like the same things, and the tin can flavor of that chili was actually not what I was in the mood for.

No harm done, though. Pal’s definitely does what it does extremely well, and anybody with a taste for this kind of fast food is certain to enjoy their speed and the friendly employees, and it must be said that their raspberry-flavored Razzie Tea went over very well with two-thirds of our party. I also wouldn’t mind stopping by their store on Lynn Garden Drive in Kingsport one day. That store, sort of the design ancestor of the ones that followed, has a giant Muffler Man statue holding a big hamburger. (Check him out at Roadside America.) I’ll try a sauceburger or a chipped ham sandwich next time, and maybe like those a little better.

*Check the comment from me on that post, wherein I thought we’d be visiting a Pal’s in December 2010. That was indeed the plan on the truncated trip to Knoxville at that time. Well… we got here eventually!