When we went to the Tri-Cities, I knew that we’d be having some very unique and original barbecue at Ridgewood, but I wanted to try some more traditional pulled pork in the area as well. We arrived at Dixie Barbeque Company, a couple of miles north of downtown Johnson City and on our way back to I-81, in a quiet lull between their lunch and dinner rushes. A gentleman named Alan Howell opened this place in 1990, after spending almost twenty years in a couple of other restaurant jobs. In the 1980s, he owned a burger joint called Richard A’s, but eventually realized that he enjoyed barbecue even more than burgers. Apparently, some of the locals howled in protest when he closed Richard A’s, no matter how good his barbecue is, because while barbecue will always spark friendly disagreement, everybody concurs that the Tri-Cities haven’t had a hamburger as good as the ones that he used to make.

Howell’s deliberately ramshackle restaurant is adorned with sports pennants and Confederate flags. The Andy Griffith Show plays on an endless loop, and dance-friendly 1960s shag music is quietly playing as you sit down to one of the most hilarious and wordy menus we’ve ever seen. For those of you allergic to too much copy, just ask the server to make a recommendation, else you’ll be here all day reading*. 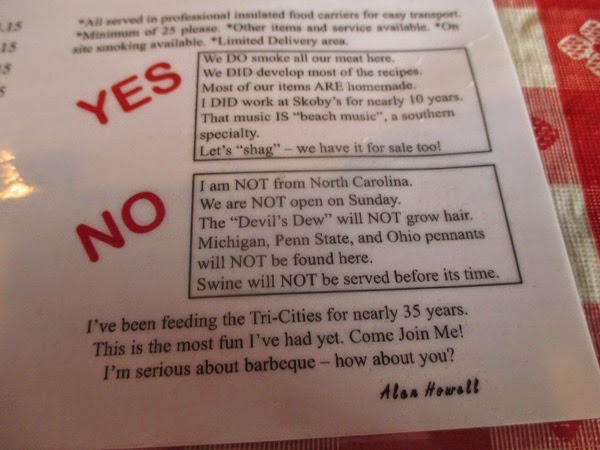 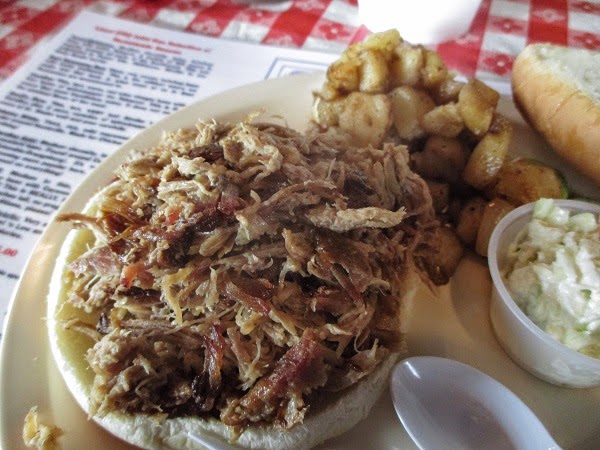 They have seven sauces here, each of which was very tasty, although the first two were a bit similar. They are: Texas, East Tennessee, Carolina vinegar, Devil’s dew (a spicier vinegar), Carolina gold, Alabama white, and the potent, thick Sauce from Hell. The pulled pork is very moist and flavorful, and any of the sauces go terrifically well with it. We had a good little visit here, enjoyed some great service and great food. 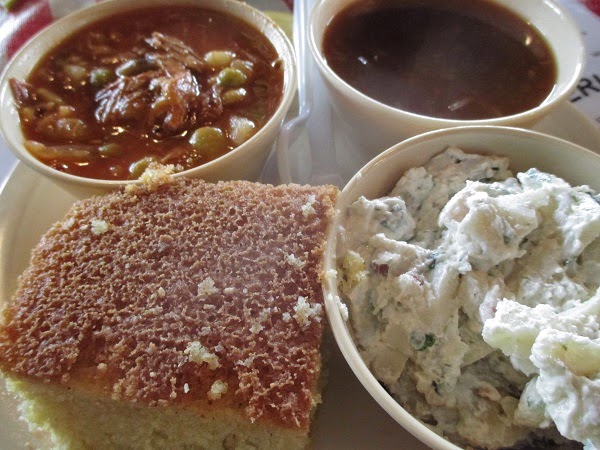 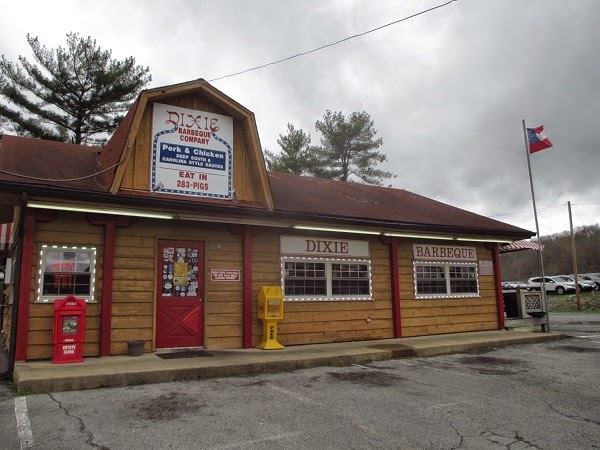 When I got home, I was very interested to learn that there is a connection between Dixie and the restaurant we’d visited shortly before, Pal’s Sudden Service. “Pal” Barger’s father, Fred Sr., had opened a restaurant in Kingsport called Skoby’s in 1946. It was one of the must-eat restaurants in the region, in part because of the food – it was, I’m told, an “upscale steakhouse” – and in part because of the astonishing design. The building was jammed, floor to ceiling, with an amazing collection of antique furnishings laid out into themed rooms.

Along the back hallway at Dixie’s, there are some framed articles, menus, and memorabilia from Skoby’s, which is where Alan Howell worked in the late 1970s and where he decided that he wanted to stick with the restaurant business. After his father passed in 1971, “Pal” ran Skoby’s alongside his Pal’s Sudden Service restaurants until deciding to close the steakhouse in 2005. The antique collection was auctioned off by a local firm called Kimball Sterling, which specializes in outsider art and antique canes.

*Speaking of reading, Dixie is one of a handful of restaurants – Sprayberry’s in Newnan GA is another – that received a lot of press and attention from the Sterns at Roadfood, but has oddly never made the jump from their newspaper columns and books onto the website. That’s always been a little baffling to me.