We have a very long way to go before accurately documenting the story of barbecue in northwest Alabama, but one point that seems clear is that all of the joints in this neck of the woods are following in Dick Howell’s footprints. He opened the first roadside barbecue stand here in 1946, smoking shoulders in an open pit over hickory woods, using techniques and recipes that he had learned from working in Memphis. He introduced mustard slaw to the region, for one major example. While I prefer the taste and the flavors of the pork and the sides at Brooks Barbeque, a few miles away in Muscle Shoals, just one look at the meals shows that back in the ’60s, Sammie Brooks Sr. made the deliberate decision to replicate Howell’s product. He just did it better, in my mind. (This isn’t unheard of. Old Clinton Bar-B-Q in Gray GA is undoubtedly a clone of the nearby Fresh Air, and a superior one.)

When Howell first opened the business, it was located on Reeder Street. He passed away and his son Richard Eugene inherited the reins. Richard moved the restaurant to Pine Street in 1970, where it remained open for the next thirty-nine years, by which time Dick Howell’s great grandson Kevin Ingram had taken ownership. In December 2009, a fire severely damaged the building, and they closed for six months to rebuild. The break didn’t slow down the traffic much; this is a very, very popular place. 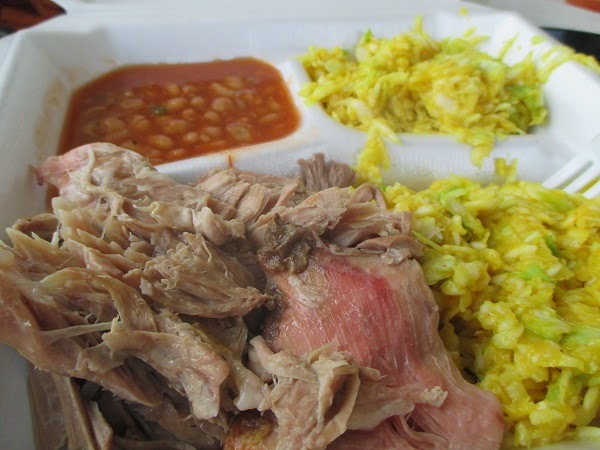 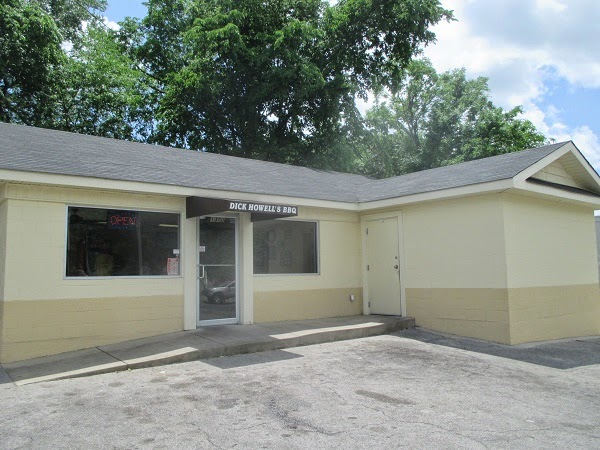 Ingram was working the register when we visited. Only the toddler and I would be dining; the ladies had lunch plans up the street. Since I love mustard slaw, and since potato salad doesn’t love me, he was good enough to allow me a double-order of slaw along with beans. The prices at Dick Howell’s have probably set a new record for the least expensive that we have ever seen. A pork plate with three sides and grilled bread here is only $5.69. That is an amazingly low price.

Despite originating the look and feel of this style of barbecue, I honestly feel that Dick Howell’s pork simply wasn’t as flavorful or as spicy as what you can get at Brooks, and just didn’t taste as great to me. The beans were certainly not in Brooks’ class, although the amazing slaw is every bit as good, if not better. My foolish daughter still – still! – wouldn’t be moved to try it. Why that kid won’t try mustard slaw I have no idea.

Unfortunately, we came after the early lunch rush had wiped out their drink selection. Like a lot of barbecue joints in the area, they just have a cooler with cans of soda – here it’s Coke products – instead of a fountain. They try to keep little plastic bottles of Milo’s tea here and those were already sold out when we arrived. Service is attentive, although not too speedy here. There was a line the entire time we were here, mostly for people getting carry-out. It’s certainly a phenomenally popular place, and we enjoyed soaking in a little history.