We woke on Sunday morning and made our way home. We really enjoyed the time away from home and the very good hotel, and the girlchild was so pleased with the UNA campus that I figure we’ll be back on a campus tour in a couple of years, if not before. We really enjoyed our time in Florence and greatly appreciated the good people at Florence Main Street for bringing us out here, but we were ready to mosey on home and find something to eat along the way. On Sundays, that can, of course, be a challenge.

In 2012, I had a very good meal at The Smoking Pig in Pendleton SC. But, with all respect to that place’s owner, Barry Deavers, I disagree with him hugely on one critical point. Shortly before we left on our trip to Alabama, I really enjoyed looking at some of the videos that the tourism board of South Carolina has put together advertising their state’s barbecue traditions. In this very entertaining clip about finding roadside barbecue, Deavers says that one of the three criteria that “absolutely makes a good barbecue place” is that it’s only open on the weekends. Almost invariably, this means Thursday, Friday, and Saturday only, like The Smoking Pig. Well, speaking as somebody who has to travel a lot on Sunday, I disagree completely. We like eating on Sunday, too! So nothing pleases me more than driving past a promising place on a Friday and seeing a sign that they’ll be open when we come back through two days later.

That also hints that they’re looking forward to serving a big mob after church. At Al & Mick’s in the small town of Snead, located between Cullman and Gadsden on US-278, that is definitely the case. We were the first guests to arrive, shortly after 11, and only one other party came in while we were there. But the nice woman working the register told me that they always expected a Sunday crowd, and seeing ten employee cars parked behind the building was evidence of that. I’m not sure where else a family is meant to eat after church in this area, and I’m glad that this place is here for them. 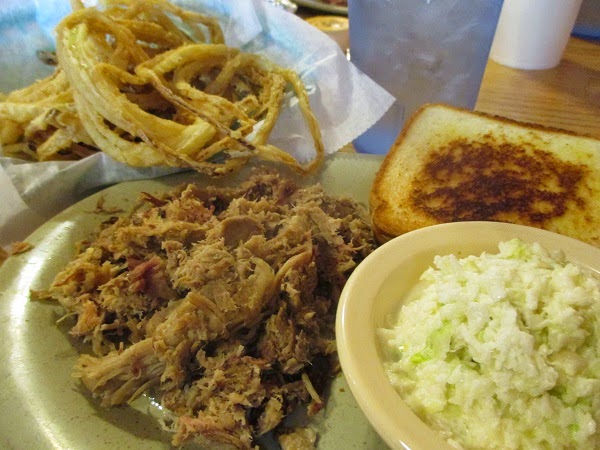 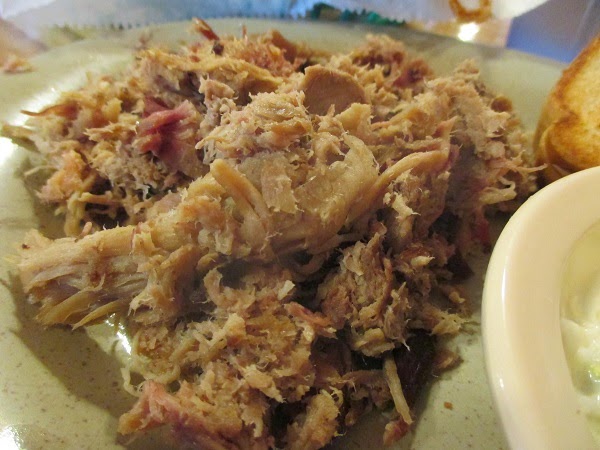 Mick Irving opened this restaurant in 1996. The Al in the name is his son-in-law, and in some places, like the staff’s T-shirts, Al’s name is whimsically capitalized: AL & Mick’s. I like it. It reminds you what state you’re in. Not many other hobbyists have stopped by over the years. 3rd Degree Berns did, about six months before our blog began, but I don’t see that anybody else has.

I think that it’s fair to say that this is what I think of when I hear “northeast Alabama barbecue.” It’s chopped pork, smoked over hickory for eight to nine hours, and not too dry. It’s typically served with a sweet brown sauce. A little further north and west and you see the vinegar sauces more often, and directly north in Huntsville and Decatur, you’ve got the white sauces dominant. But this meal is very much in line with the barbecue that we’ve had along the I-59 corridor. It’s quite similar to how the small Georgia chain Williamson Brothers (from Talladega) tasted when they first opened in 1990. 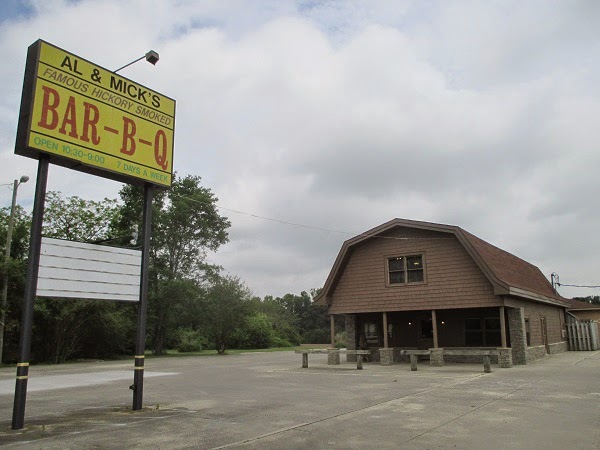 The girlchild suffered the grumbling reminder that Brunswick stew is very rare on Alabama menus – if she read this blog, she’d know that – but she enjoyed her meal all the same. The meat is very tender, fresh, and flavorful and it blends so well with the sauce. All of the sides were good, but the onion rings were the best by far. Holy anna, these are terrific, wonderful, greasy, bad-for-you awesome. We all really enjoyed this stop, and really enjoyed that they’re open at such a convenient time for road-weary travelers like us. Barbecue business owners, y’all listen to Al and Mick! (Or AL and Mick, if you like.)