One weekend in May, Marie’s mother flew into town for a visit. This coincided with Marie’s desire to take the three year-old out someplace to pick strawberries. Boy, howdy, did this ever turn out well for all concerned. We went to Washington Farms, near Watkinsville, and brought back two gallons, many of which Marie transformed into the most remarkably good strawberry jam that anybody’s ever had. Plus we spent several hours in Athens, having a fine time in the Classic City.

After we packed the strawberries into the coolers we brought, we had an early lunch at The Grill and then took the three year-old to play at the enormous playground at Southeast Clarke Park for more than an hour. We’d have let him rampage even longer if it hadn’t been so darn hot. Reckon it’s a lot hotter in Athens today, though. Whew!

Marie had decided that spending a little time in the air conditioning at the Athens-Clarke County Public Library would be a good idea, and I decided that dropping me off downtown to find something to eat would be a better one. Aggravatingly, the promising barbecue place, called Dawg Gone, does not open until three on Saturdays. So I moseyed back through the old Hot Corner, the intersection of Washington and Hull Roads, and found a new-ish bar in the old home of the sadly-closed Wilson Soul Foods. It’s called The World Famous, and I’d read a thing or two about it at some other places, linked below. This sounded like a perfectly good place to get out of the sun for a while. 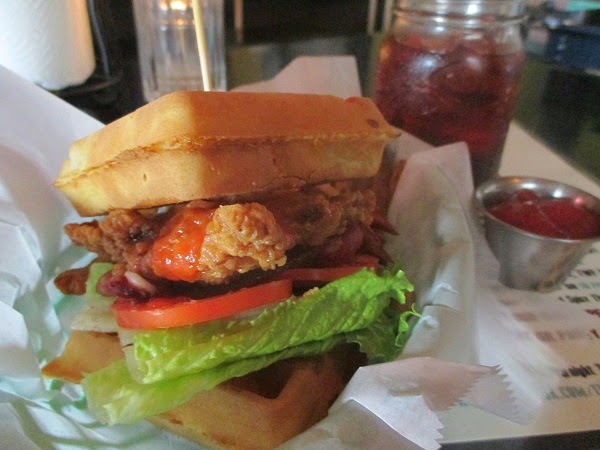 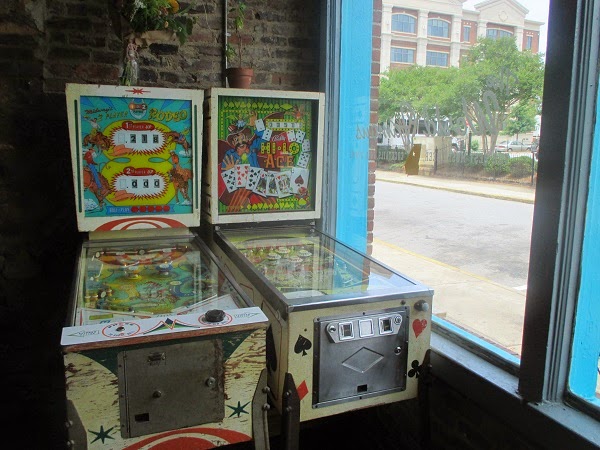 Roger from Friday Date Night described The World Famous’s chicken and waffle club as “one of the best sandwiches ever,” which caught my attention. I’m not sure that I’d go that far, but it certainly is an unbelievable mess of one and pretty darn tasty for a stunt sammy. The chicken, bacon, veggies, hot sauce, and maple butter are served between two waffles. It cannot be set down once dining has begun. Once you remove the toothpick holding it together, you’re in a race against time before it collapses, and a race against cleanliness before the sauce and butter find their way onto your shirt.

Everything was really good, and made from local ingredients. Even the hot sauce is made in-house with locally-grown peppers. It is not really that spicy at all, but gives the sandwich a delightful kick of flavor.

The World Famous is owned by Bain Mattox, a musician who’s been gigging and self-releasing records for many years – I saw him along with two other acts opening for The Wrens in 2006 – and the kitchen is run by Jarad Blanton, who used to work around the corner at The National. And speaking of corners, this building has a lot of history. Wilson’s Soul Food closed in 2011 after at least thirty years in this location. I didn’t eat here very often, though I certainly should have. The hot chow-chow here was really quite amazing.

I finished my sandwich and washed it down with a Cheerwine served in a mason jar – I just loved that – and read some of the local papers. I had thought about walking around and shopping, but it was just too warm. So I enjoyed the air conditioning for a little while longer before I made my way, and waited for everybody to get done at the library.

I was at a bench in front of the Morton Theatre when some loudmouth got into a screaming match with the driver behind him about whether he could make a left on red going from a one-way street onto another. He insisted it was illegal. I tried to tell him he was mistaken and he didn’t want to listen and was just as much a loudmouth to me. I figured that I should’ve just stayed in The World Famous for another Cheerwine, or maybe had one of their popular cocktails, if people were going to be that dumb.

I still wanted some barbecue, so after a little sightseeing for Marie’s mom and a little shopping, we pulled into the Fresh Air Bar-B-Q in Bogart for a sandwich to go. That’s far from my favorite in the Athens area, but it really hit the spot.

Other blog posts about The World Famous: