On July 4th, I wanted barbecue, and so did everybody else in this and probably every town. In the mid-afternoon, Fox Brothers tweeted that their wait for carry-out orders was two hours long. I decided to visit one of Atlanta’s less heralded and hyped barbecue joints, where the wait might not be endless. Joe and Christine Parks opened Papa Joe’s in 2012 with their son, Joe Jr., after five years of success on the tournament circuit, but they certainly had themselves a good crowd as well.

It’s easy to miss Papa Joe’s if you’re not looking for it. This section of Candler Road a few miles north of I-20 was all originally zoned residential but several of the old houses have been converted into businesses. Papa Joe’s is actually set up in a house that had previously been reworked into a hair salon! The front room has been turned into a small dining area with the kitchen separated by a small counter in its doorway. Parking is not particularly plentiful, but there is a small lot behind the building, accessible from the side street (Salmon Avenue), and the smell of smoke from the Grill King inside the screened porch behind the kitchen promises great things. 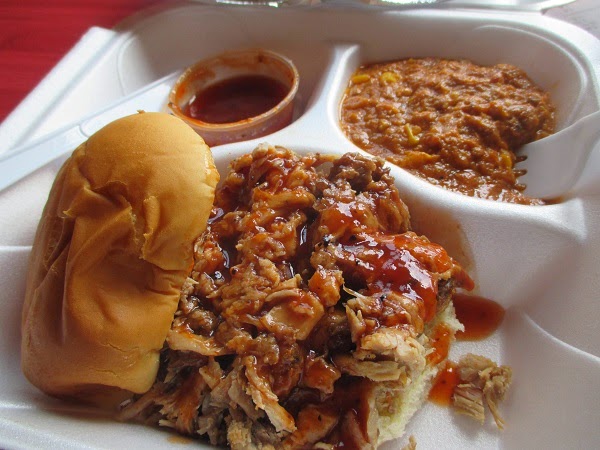 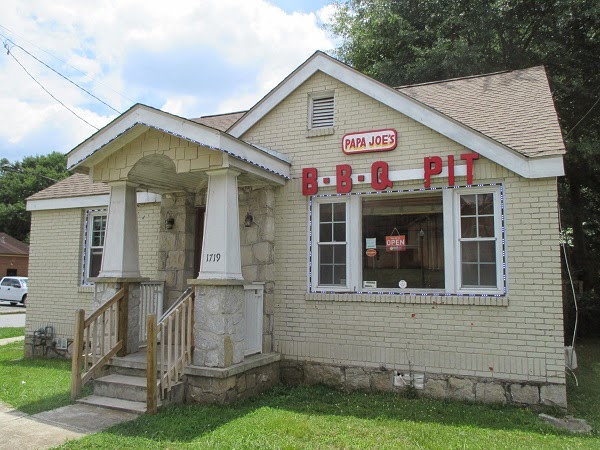 I do feel that it is a little unfair to “judge” a place – positively or negatively – based on the experience one gets during a festival or on a holiday like the Fourth. The demand for food can easily overwhelm a kitchen, and the meal you get might – might – not come with the same love and preparation as a normal day. In fact, I was lucky to get a chopped pork sandwich at all; the girl working the register had misheard the people behind her and thought that they had sold out already. In fact, they had sold out of some things, and were no longer filling large carry-out orders of chopped pork. They’d planned to close at six; inventory was running out by two.

Because the kitchen was a little crazy, I didn’t object that my meat came presauced despite my request for dry pork, although this meat is too good for sauce so ordinary. The pork is smoky and very moist, and more flavorful than what’s served at many other joints in Dekalb County, but the Kansas City-style sauce, which is sweet, sticky, and goopy, drowned and muted the meat’s flavor somewhat. The result was a pretty good sandwich; dry, it might have been a great one.

Far better is the Brunswick stew, which came out too hot to taste for a couple of minutes and has a very rich flavor and a good, thick consistency. The list of Atlanta barbecue joints who serve less interesting stew is as long as your arm; this stuff is fabulous.

I still found myself a little peckish after finishing my sandwich and stew, and so I decided that I would look for a snack. I reminded myself of Calvin Trillin’s stories of his late friend Fats back in Kansas City, who would, on his way to lunch, stop by Kreske’s for a chili dog. I went west on Memorial, hoping that Ann’s Snack Bar would be open. I couldn’t think of a better snack than a ghetto burger, but she was closed for the holiday. The following evening, I mentioned this to Andy from Burgers, Barbecue and Everything Else, who suggested I’m probably the only person in the city who would consider one of Miss Ann’s ghetto burgers to be a top-off little snack.

Then I remembered that the Cook Out chain had opened a store in Atlanta and I wouldn’t mind a milkshake. Everybody else had the same idea. You wouldn’t believe the mob. Traffic was routed through a labyrinth of cones, and employees were passing out menus to the absurdly long line spiraling in loops around the building and backed up onto Moreland Avenue. If I had any sense, I’d have driven on, but the twisting spirals of cars amused me, and so I pulled in. When an employee greeted me, I looked at the menu and noticed that they claim to serve Lexington-style barbecue. Well, that was only four dollars, what could be the harm? I ordered a tray and took it back to the office with my orange push-up milkshake. 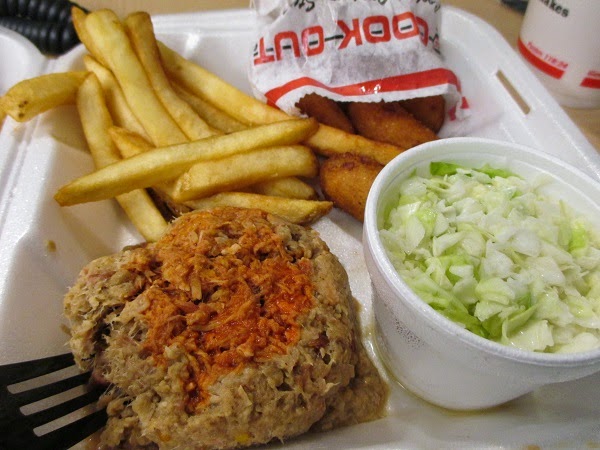 Note: That Cook Out does not count as one of the more than 290. Its barbecue barely counts as food.