You know, any excuse for a celebration works for me, which is why we love hitting some kind of centennial – any kind will do. But we’re especially pleased to announce that, with today’s chapter, we have written about 300 barbecue restaurants in the southeast. Two or three of our peers and friends in the hobby have done more, but I’d like to think that we’re in a pretty small group to have visited and documented so many. And through the end of the year, we hope to add more than a dozen to that total. There are always more places to find and we can’t wait to sample them!

Number 300 for us is Blind Pig, a popular joint about an hour south of Atlanta in the community around Jackson Lake. It has only been open for a little more than five years, but it vaulted into popularity when, in the summer of 2010, Atlanta Magazine named it number five on their occasional lists of the city’s ten best barbecue joints.

Wait, didn’t I just say that it was an hour south of Atlanta? Well, the next time that Atlanta Magazine did a top ten list, in the early summer of 2013, Blind Pig was no longer on the chart, and neither was Hickory Pig in Gainesville, which had been number one in 2010. Our friend Andy, who writes Burgers, Barbecue and Everything Else, has a theory that somebody persuaded the magazine to actually make a top ten list of restaurants that are actually, you know, around Atlanta and its suburbs, and not an hour north or south. 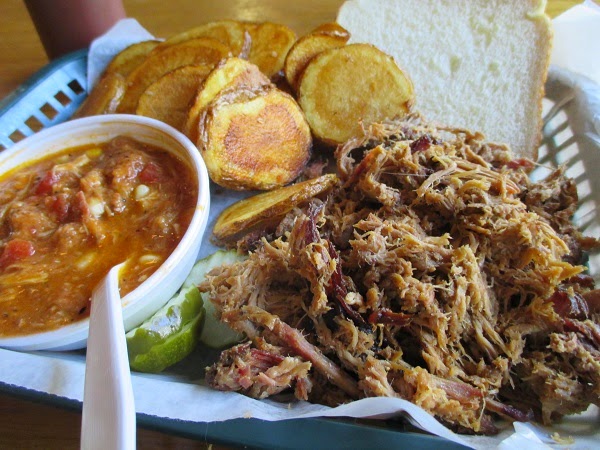 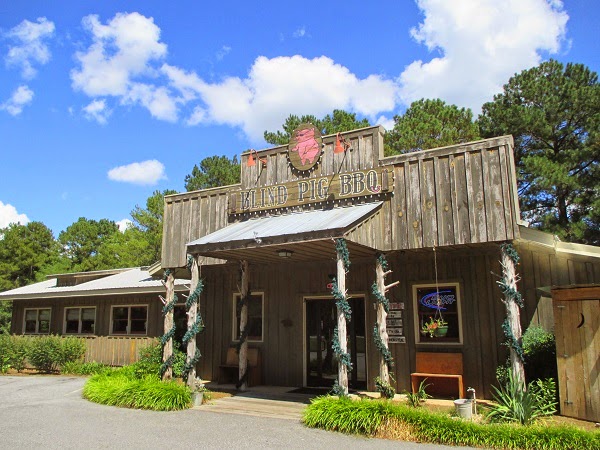 Anyway, Ron Brown opened this place in the spring of ’09 and was immediately faced with the challenge of getting people to actually find the place. If you live or have business in the Jackson Lake area, it’s in a very convenient place on Barnetts Bridge Road, but if you’re traveling through, it’s miles out of the way of anyplace. So the obvious routes are marked with large wooden signs showing their logo, a pig on two legs, with sunglasses and a cane, to reassure you that you’re on the way.

I arrived after the lunch rush on a Friday and had the place to myself, other than the two employees watching ESPN. It’s a big restaurant, with seating for more than a hundred, that does most of its business for dinner and on the weekends. Brown prepares the pork shoulders and the ribs, along with turkey, in an upright steel smoker and uses a mix of hickory, oak, and walnut. There are mild and hot varieties of the brown-red tomato-based sauce, and the food is absolutely excellent. I enjoyed this quite a bit. 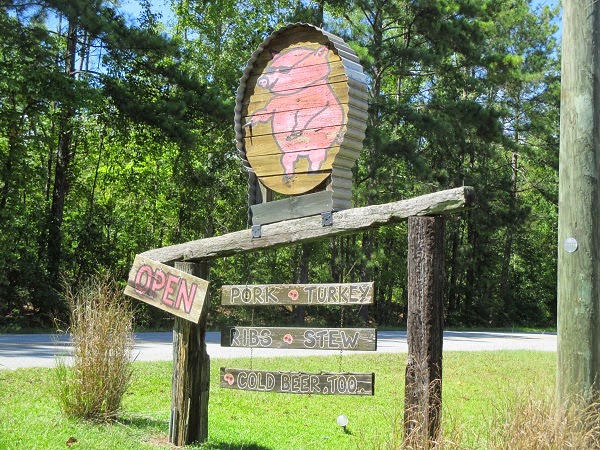 The pulled pork was smoky and not too dry. Brown has nailed exactly the flavor profile that I enjoy most in barbecue, and it didn’t need either sauce at all. I was also very pleased with the really rich stew, with a great balance of tomato and corn, and enjoyed the “home fries” as well. These are fried, sliced potatoes just about as good as the wonderful ones at Atlanta’s Grecian Gyro chain, but you know, I enjoyed a little of the hot barbecue sauce more with these than I did the sauce on the meat! The pork was just perfect without it.

Blind Pig is certainly out of the way, but if you are planning a pilgrimage to Fresh Air, one of Georgia’s barbecue temples, it’s not very far from it (about eight miles) and certainly worth the detour. I greatly enjoy both places, in part because of the very different flavors (note that Andy, linked below, doesn’t agree and didn’t enjoy this place much), and would like to find another excuse to come this direction again someday. (As should more of us hobbyists! The list of other blog posts below is woefully short!)

Other blog posts about Blind Pig:

You can see all the barbecue restaurants that we have visited for our blog (300 of ’em!) on this map, with links back to the original blog posts. It’s terrific for anybody planning a barbecue road trip through the southeast!