I love running into other barbecue roadtrippers when I’m out eating, and Grady’s BBQ, which is loosely located somewhere close to Dudley and more accurately in the middle of nowhere, is a good drive from any population center and probably requires a road trip to visit. Steve and Gerri Grady opened their barbecue joint in 1986, doing small amounts of business, as you might expect from a middle of nowhere restaurant, but in time, the word got out that these good people were still cooking with wood, they got mentioned in a few books and websites, and now hungry eaters plan their barbecue drives to incorporate a trip here.

So after my meal, I took some photos, just as another group arrived and began pre-meal snapping. Two locals came out to their car, to assure the newcomers from Wilson – regulars at Parker’s who were anxious to try this place – that they were in for a great meal, and that I, who didn’t actually enjoy this one as much, did not know what I was talking about. At least they were good-natured in their teasing, but I had to say, wood or gas, Parker’s serves up a very good plate of barbecue. This was okay, and I see that there is a lot of love, but I definitely prefer Parker’s.

It might be the case that I was unfairly biased by the really, really great meal that I had at Skylight Inn about 45 minutes previously, but I don’t think so. I’ve been doing this long enough to figure there are maybe only two barbecue restaurants in the entire country that wouldn’t feel like a comedown after that experience, and can judge each place that I visit on its own merits. Grady’s was okay, and, like Skylight Inn, the meat incorporates those lovely pork skin cracklins, but we’ve all had better. To be honest, I enjoyed talking about the area’s barbecue more than I enjoyed eating it here. 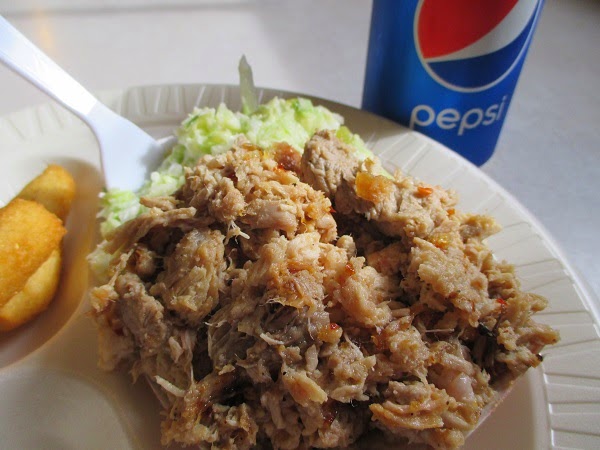 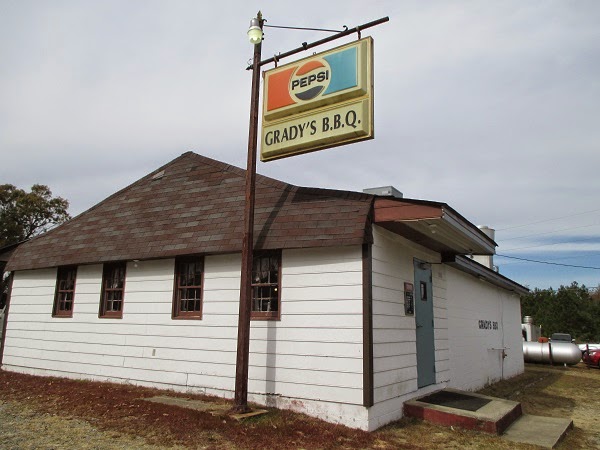 The barbecue here lacked texture and was just way too watery for me. And so early in the day, too! What a shame. But I’m reminded of something that my Alabama-based buddy, Dave Reasons, writer of The Brown Bag Review, has said. The flavor and taste of barbecue can vary a whole lot even at one establishment – that’s not to say that it will, just that differences in pork stock and ingredients can make a huge difference sometimes – and the more that I read the rave reviews out there for Grady’s, the more I’m convinced that I came on an unfortunate off-day. BBQ Jew, linked below, is especially fond of this place, but nobody but me has a less-than-glowing report. I am the outlier, and should probably be excluded from the data set. Well, there’s that one guy in BBQ Jew’s comments. I really wish that I could say that I had a better experience than I did.

So was it a bad day for this storied establishment, or has it been slowly going downhill? Well, the receptionist at that Best Western in Goldsboro was awfully sweet and friendly and wanted to make a reservation for my next trip to town while I was still there. Should I ever take her up on it, I might have to give Grady’s another chance. We’ll see.

Other blog posts about Grady’s BBQ: