I love it when expectations get confounded. Looking over the list of barbecue joints that we’ve visited, it’s safe to say that South Carolina has been the most uneven of all southeastern states. It’s the home of the godlike Scott’s, of course, and several other very good restaurants, but more than a handful that I’ve visited once and that’s about enough. Making matters worse, the Florence metro area was not only batting zero-for-two with me, but the zeroes were so disappointing that I was actually giving the Pee Dee region negative numbers.

So I had two hours and change after leaving Dudley NC to wonder whether Shuler’s, which turned out to be a great big log cabin-like barn of a place four miles off the interstate and kind of near a town called Latta, would prove equally underwhelming. To recap, on my way northeast, I had some very good barbecue at Maurice’s in Columbia and some woeful barbecue at Roger’s in Florence. To my very pleasant surprise, the two South Carolina barbecue places that I visited on the way home were both really, really good.

In an even more pleasant surprise, Shuler’s is a buffet place, which is definitely hit-or-miss with me. I just had a sandwich and a side of hash and rice, and both were really good. They didn’t skimp on the hash, either. Lynn and Norton Hughes opened this place in 1996 and it’s incredibly popular with the locals. I came by in the mid-afternoon and the place was still about two-thirds full. There is a separate dining room in the back which gets opened at peak times, and there’s a huge deck behind the building overlooking a pond. They even occasionally have live country music outside as well. 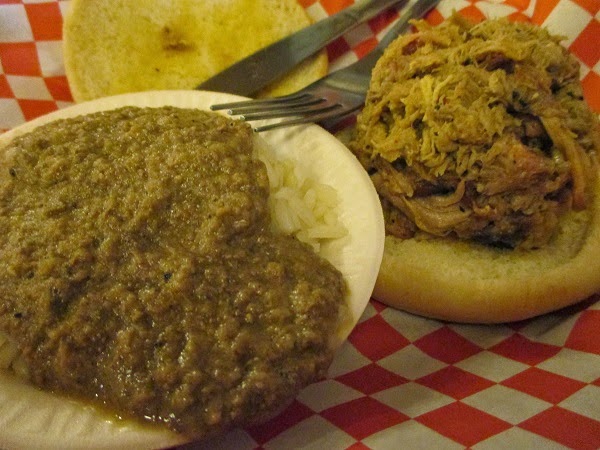 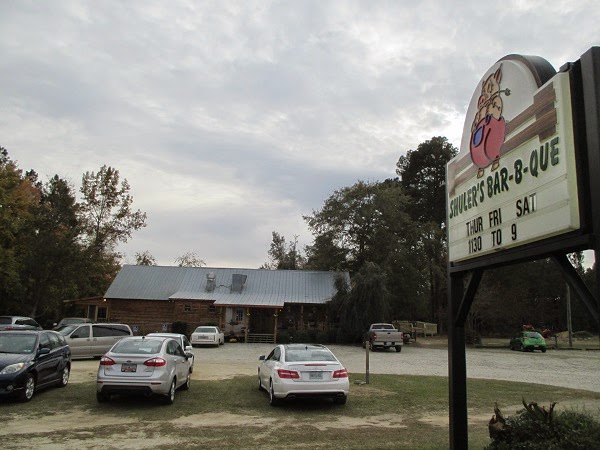 The restaurant is not hard to find. Out front, there’s one of those super-gigantic American flags that you usually only see above car dealerships. The flagpole is as big around as I am.

The barbecue is very mild and has a gentle taste of smoke. It’s kept heated by simmering in the sauce, as is the standard in these parts, but it has good texture and flavor throughout. They serve a very healthy portion of really yummy hash as a side, unlike what I’d experienced the previous day. The service is incredibly friendly and prompt, and just about the only complaint that I have are the red checkered tablecloths, which conspire to ruin any photograph taken in a restaurant! It was good to learn that there’s barbecue worth eating in this region after all, and gives me hope that I might find more the next time the road takes me out this way.