There were a couple of barbecue joints in Atlanta’s northeastern suburbs that had been waiting for us to visit for such a long time. To be honest, once upon a time, we had thought that we’d be going up I-985 / US-23 a little more frequently than we do, heading north to visit Tallulah Gorge, and we’d stop into all these places along the way. But we eventually reasoned that the gorge is no place for a little one, particularly one as rambunctious as ours, and so we are not that way as frequently. We’ve stopped by most of the barbecue places (but not all!) in Gainesville and further north at least once, but closer in to Atlanta, we have left some gaps. So one Saturday last month, I asked whether Matt and his wife would like to meet for lunch at Praise the Lard.

I first read about Praise the Lard at the 285 Foodies message board. Andy of Burgers, Barbecue and Everything Else has also paid them a visit, and I was optimistic that I’d enjoy a good meal here. I did. This is really good barbecue, smoky and flavorful, if just a little drier than I normally prefer it. 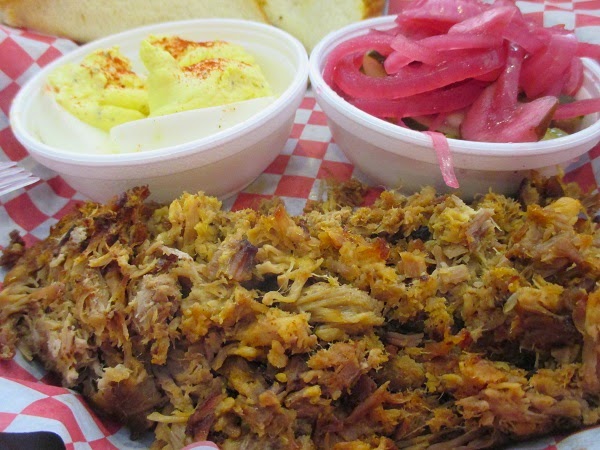 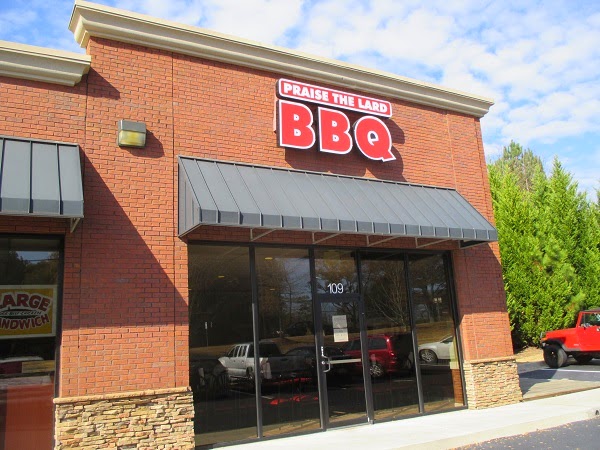 The restaurant is deceptively huge. It occupies the corner parcel of its strip mall along with the next two. The walls are decorated with religious-themed folk art, and unfortunately, somebody decided that we needed to be listening to Christmas music instead of listening to the announcers marvel at Georgia and Georgia Tech each trying to match the other in goal-line fumbles and blocked kicks.

As for sauces, they have six. The house sauce is a tomato-based one in both mild and hot varieties. They also make a South Carolina-style mustard sauce, a Lexington-style vinegar-with-tomato blend, and a quite neat Al Pastor with a citrus tang. In his report, Andy had written about how the owner was developing a lethally dangerous ultra-spicy sauce, but this doesn’t seem to have made it out to the counter. Instead, there’s a very good “Nuclear” sauce, with a small sign that explains that this was as hot as he was willing to leave unguarded. It’s plenty hot enough, I believe.

Overall, it was a pretty good lunch, and worth considering if you’re ever along the I-985 corridor. I enjoyed kicking back and catching up (and adding the first new Buford Highway restaurant to our collection in quite a few weeks… yes, this is still the very same Buford Highway as the corridor in Atlanta that we enjoy, albeit twenty miles north of all the other places that we visit) before departing to check out a quite good comic and game shop called Galactic Quest around the corner. We probably would have stayed even longer had the horrendous Christmas music got so deeply under Matt’s skin, forcing a hasty retreat. I thought the original “Feliz Navidad” was bad enough; somebody’s twangy country version of it really was an assault on the ears.