I have a very soft spot in my heart for Bob Burley, who ran Old McDonald’s Bar-B-Que from 1982 to 2008. When I first started writing (badly) about barbecue – this was when I had a lousy Geocities page about barbecue – I tended to just walk into a restaurant, eat, leave, and write a pompous paragraph, learning nothing and imparting less. Mr. Burley was the first person to take a few minutes and explain his process. Eventually, I started inquiring from other people about the food I was eating, learning more about traditions and styles, and having my preconceived notions upended, and then I quit writing about food for eight or nine years.

Old McDonald’s Bar-B-Que was opened by Bill and Norma McDonald in 1978, serving barbecue and pizza to people visiting Lake Lanier. Today, the long building is surrounded by places that rent boats. Even the one vacant parcel across the street has a “coming soon” sign announcing another place that will sell and service outboard motors. The McDonalds sold the business to Burley after only four years, and Burley turned it into one of the best barbecue restaurants in the state, by leagues. His secrets were a gentle spice rub and a mix of hickory and apple wood that gave the chopped pork a delicious, juicy, fruity flavor. For a while, in fact, this was my favorite barbecue in Georgia, and, when I lived in Alpharetta, I drove up here eight or nine times after that initial visit to have lunch.

After I moved to Marietta, I only visited a couple of times, and looked forward to a return trip in 2008, with Marie and a couple of friends. We were on our way to Gainesville to see Matt and Kelley get married. I bragged and boasted of how amazing this barbecue was, and we sat down to a deeply mediocre meal. It wasn’t just the crash and burn of high expectations under scrutiny, because in 2003, I came up here with some other friends and we all enjoyed an amazing meal. No, something had gone badly, badly wrong, which is why it’s taken very nearly five years of blogging to make a trip to Old McDonald’s. I just couldn’t bear to be negative about a place that was once so amazing. 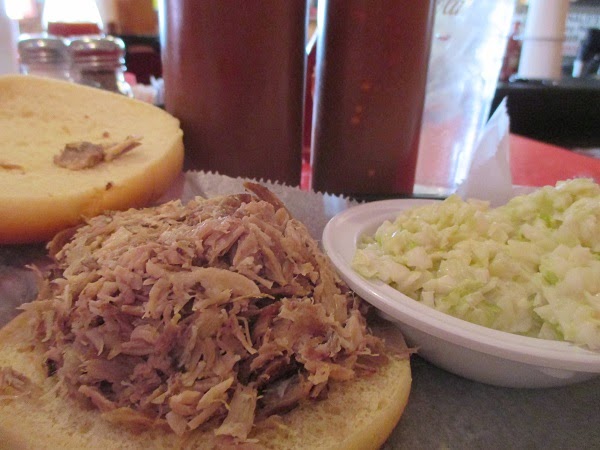 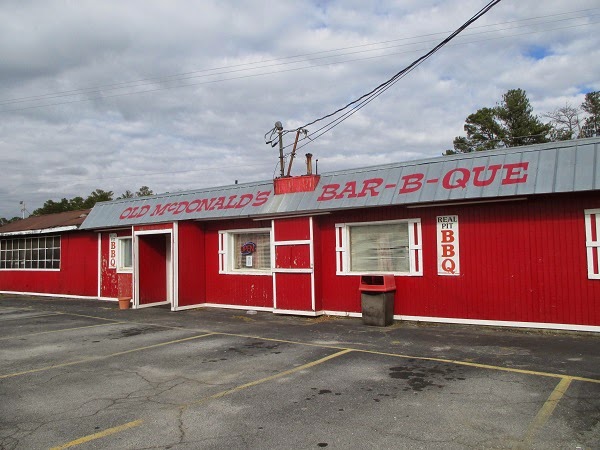 To be clear, Old McDonald’s is now much, much better than it was in 2008, although still a very long way from being as amazing as it was fifteen years ago. Burley had actually sold the business to Judy Richardson, the present owner, earlier in 2008, and I have to assume that she and her new crew were getting used to things when we made that ill-fated stop. They have recovered, and they’re making a pretty good plate of pork again. It’s not majestic, and it may not warrant a really wide detour, but if you’re in the area, it is worth a visit.

I ordered a sandwich, with stew and slaw as my sides. The mayo-based slaw was the only thing I didn’t enjoy. It didn’t taste at all fresh. The pork was smoky, but quite mild. I’d have liked a vinegar-based sauce with it, with a good bit of pepper, but the sauces here are mild and hot versions of a fairly thick tomato-based sauce. It was good, but just a dab was all it needed; the pork had such a mild flavor that sauce could easily smother it, so guests should certainly ask for the meat to be served dry.

Best of all was the stew, which was very rich and served ahead of the sandwich, piping hot, with saltines. It had just enough time to cool to a comfortable temperature as the rest of my food was brought out. The stew is not very thick, and it’s full of meat with a very nice tomato flavor.

Overall, while Old McDonald’s is genuinely not the amazing place that it once was, it is certainly not bad. If I lived in the area, I’d stop by fairly regularly, and possibly often enough to want to try their weekend catfish specials or breakfast. It’s really not so amazing anymore that I want to make the hour drive to get there, but I’m glad that I visited and was able to see that they’ve improved a good deal on the last stop. I hope that they get better and better from here.