Last week, I mentioned that I have a hypothesis that, rather than seeing barbecue traditions evolve region-to-region, in Florida it’s more likely that individual restaurants will crop up that have the look and feel of what the owners grew up knowing someplace else. Now, obviously, that can happen anywhere, and will; witness the Texas-style meat market, Moonie’s, just northeast of Atlanta in Flowery Branch. But I suspect that this is much more common in Florida than anywhere else in the southeast. Absent a strong regional barbecue identity that defines what everybody in town expects, places can pop up with the flavors and tastes of other regions much more easily. This is somewhat related to what Todd Brock was getting at in his excellent story about Atlanta barbecue in Creative Loafing last October, which you should read.

Porkie’s Original BBQ in Apopka is a pretty good case in point. When I met the fellow that my mom married last fall, he told me that I was certain to enjoy this restaurant, and it’s where he always goes for barbecue because the owner, Steve White, is from his and my mother’s home town of Fort Payne AL. He set up in a former KFC building in 2003 and serves a plate of pork that has an almost identical flavor profile to anything you’d expect to find in northeast Alabama, northwest Georgia, or middle Tennessee. This is not a radically distinctive style of barbecue for those of us who live nearby. There’s a stronger Memphis influence at work at Porkie’s than, say, a Kansas City or a Goldsboro influence, but it’s absolutely likely that, elsewhere in the Orlando region, you could possibly find those influences and more at different restaurants. 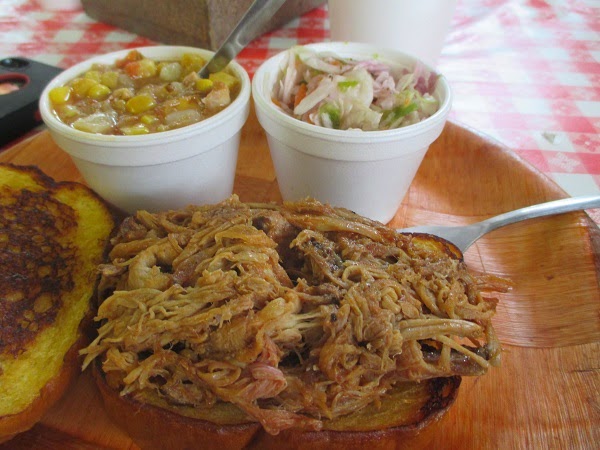 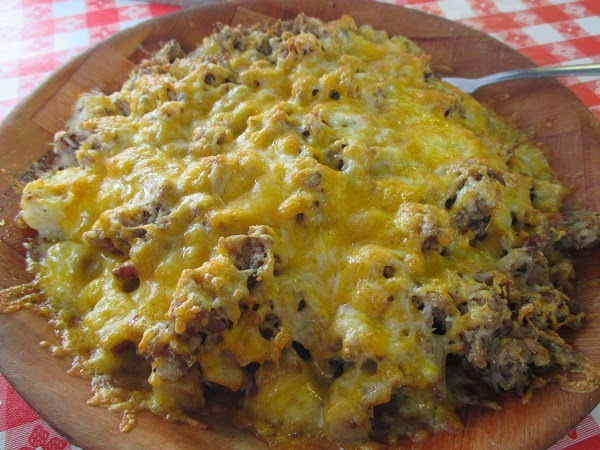 For guests looking for something a little different from the usual barbecue restaurant menu of pulled pork, ribs, and the like, there’s the Tater Hash, which is a little bit like those extra-loaded baked potatoes that Marie and the girlchild enjoy. It’s chopped pork, potatoes, lots of cheese, sour cream, and then typically customers drown it in one of Porkie’s six sauces. These are sweet and sweet hot (each a more Tennesee-styled brown sauce), mild and XXX (a more Georgia thick red tomato-vinegar), Carolina (mostly vinegar) and Gold (mustard). Since moving down here, Mom’s been dieting and exercising and taking very good care of herself. A plate of Tater Hash is one of the big indulgences that they’ll enjoy once a month or so. It’s really good, they say, but I don’t want sour cream within twenty feet of my own barbecue, thanks. The lunch was absolutely fine. It’s good, reliable comfort barbecue. I would not mind another visit, but then again, we probably will not be in central Florida very frequently unless some donor wants to pony up a big ol’ expense account for us, and we really need to try lots of other places and investigate this hypothesis about Florida barbecue at greater length. I hope Mom and her husband can be persuaded to come to some other Orlando-area barbecue joints when we’re down that way again later in the year.