There was never a place in the blog’s narrative for this before now, but we had a very stunning surprise in our lives this past September. Eagle-eyed viewers might have noticed that my mother, who lived in Smyrna GA and at whose home – my childhood home – we often met up for meals in and around Vinings, rather abruptly vanished from our stories. That’s because she spent six or so weeks discreetly reconnecting with a very old flame and then gave us about three weeks’ notice that she was marrying the fellow, selling the house, and retiring to Florida with him. So there she now resides, just outside the town of Apopka, about twenty miles north of Orlando, and home to nine million plant nurseries and landscaping companies, enjoying warmer weather and going to the gym five days a week. She’s happy, active, and doing very well.

I’ve resolved that the only possible explanation for this is because she cares very much for our blog and wants for it to have more Florida content in it than just from the Jacksonville area. So now we’ll be making occasional – very occasional and not as often as she’d like – treks to central Florida, and beefing up the section a little bit.

With that in mind, we left Jacksonville after an exceptional meal and fun on the monorail and drove another couple of hours to spend a late Christmas visit with Mom and her new husband, who told us that bears are occasionally seen in the neighborhood. Lovely. This development is something like ten miles from any business other than the plant nurseries, and for supper, we rode out, forever, to the town’s Tijuana Flats for some pretty good Tex-Mex and some killer hot sauces. 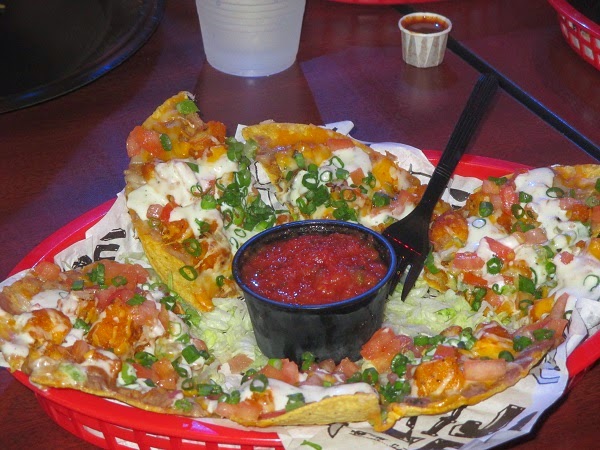 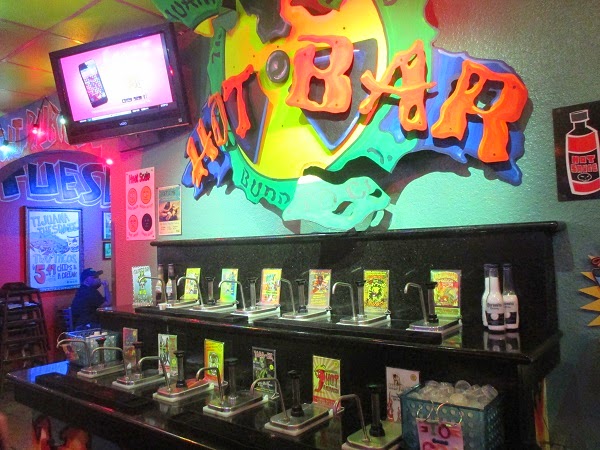 We had never heard of Tijuana Flats before, but it’s a very large regional chain, with just over 100 locations in five states. There are seven dotted around North Carolina, one each in Indiana, Virginia, and Georgia (Pooler, near Savannah), and their website presently lists 95 stores in Florida. A UCF grad, Brian Wheeler, opened the first store in another Orlando suburb, Winter Park, twenty years ago. Four years later, Tijuana Flats caught the eye of Camp Fitch, who had retired from the restaurant biz. He had been the president of S & A Restaurant Corporation, which had owned Bennigan’s and Steak and Ale. Fitch had left S & A more than ten years before the company’s untimely demise, and the closure of all those Steak and Ale locations. (Since managers and chefs at Steak and Ale went on to so much additional success in the business, with chains like Marlow’s Tavern and LongHorn Steakhouse, we love to note whenever we see their footprint in today’s restaurant world.)

Anyway, in 1999, Wheeler and his father partnered with Fitch and turned the popular Winter Park store into a rapidly growing chain of fast-casual burrito places, dark, with day-glo fixtures, wacky paintings, and a young, college student vibe (the interior is too dark, as you can see, to photograph in the evening with any success). They have a very fun secret weapon: a hot sauce bar. Unlike many other similar restaurants, they only seem to offer a single, mild salsa, but guests can really ramp up the heat with more than a dozen different sauces. Mixing a little of the, ahem, “Smack My Ass and Call Me Sally” sauce into the salsa makes it really memorable! We ordered a “Tijuana Trio” appetizer of salsa, cheese dip, and guacamole, and if the salsa was disappointingly tame, the others were really great. They make some awesome guacamole here. 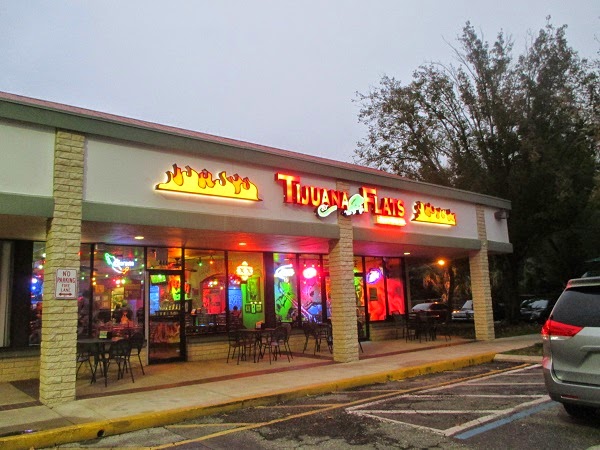 The burritos and tacos here are pretty much what you’d expect from this sort of restaurant, but these sort of places don’t often include tostadas on the menu, so I ordered those. The “Bangin’ Style” tostadas, so named because they’re spiked with an awful lot of one of those “Smack My Ass” line of sauces, come with crispy chicken, refried beans, cheese, grilled onions, peppers, and tomatoes. Not a bad meal at all, really. Should the team be bold enough to move into the Atlanta area, I wouldn’t mind sampling these again with some different flavors from their hot sauce bar.

Other blog posts about Tijuana Flats: