I think at this point, a little skepticism about many of the newer barbecue restaurants to open in Atlanta might be reasonable. Over the last eighteen months, we’ve seen several upscale places with more corporate muscle than family tradition behind them break ground, with executive chefs rather than pitmasters, owned by restaurant groups with a portfolio of concepts. I’m not calling that a bad thing, just that an eyebrow might genuinely be raised. In the case of Twin Smokers BBQ, I’m glad to say that I think that they’re doing a couple of things correctly enough that even the most cynical among us might leave a little satisfied.

Last month, I was invited to stop by to see the place, get a little tour, and sample some of their food. The first thing that I saw upon entering put my mind at ease somewhat. It’s wood, and lots of it. Twin Smokers BBQ does indeed have an executive chef, Chris Blobaum, formerly of Article 14, but he’s an advocate of using wood. They have a pair of Oyler steel uprights from J&R Manufacturing in Mesquite TX, and they fill one with post oak and mesquite to smoke the beef and sausage, and the other with hickory and white oak to smoke the pork and the chicken.

I spoke a little with Ginger Garrett, who manages this property for Legacy Restaurant Partners, and she thinks that this is the only place in Atlanta to use an Oyler*. Legacy’s other restaurants include Stats, Max’s Coal Oven Pizza, and Der Biergarten, which are all alongside this restaurant on the same stretch of Marietta Street near Baker, and, of course, Article 14, which we greatly enjoy and have written about a couple of times.

(In a bizarre coincidence, this was my first time seeing a J&R smoker, and a week and a half later, I got to see another one in action in Charlotte NC that may be one of only two J&Rs in that entire state. More on that experience in a few chapters.) 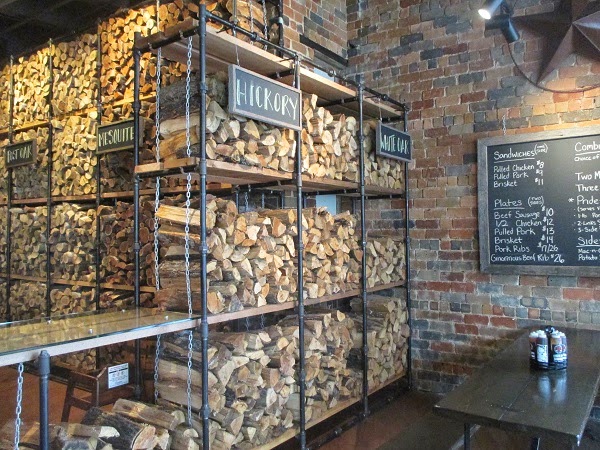 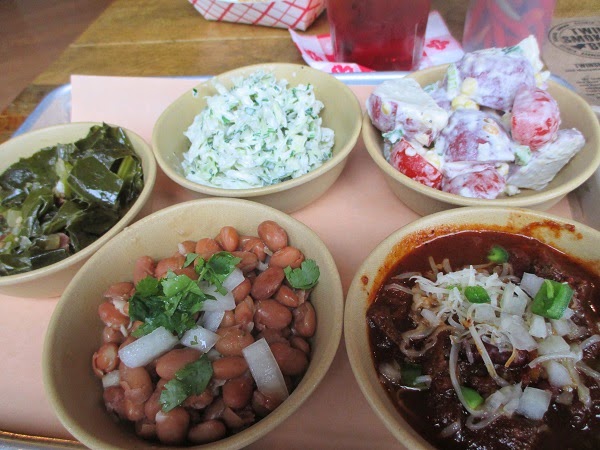 As with many of these newer barbecue restaurants, there’s an impressive list of bourbons, whiskeys, moonshines, and beer, including several Georgia breweries like Monday Night, Wild Heaven, Terrapin, Red Hare, and Jekyll. But for those of us who just take sweet tea with the barbecue and are here for the food, there are some palpable hits and some near-misses. I wasn’t taken with the cole slaw at all – it was finely chopped, but without enough vinegar or mayo or seasonings to give it any oomph – but the brisket chili was phenomenal. This was so rich and just downright exploded with flavor, and promised good things from my tray of meat. 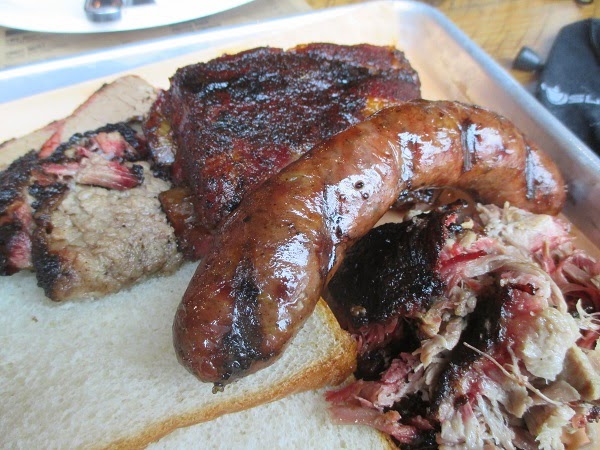 Perhaps this is amusingly appropriate considering that the smokers come from a Texas manufacturer, but the pork ribs and the pulled pork were about average for this area. They’re not at all bad, but I was not wowed by either of them. On the other hand, the sausage and the brisket are completely amazing. I’m not sure that this brisket isn’t even better than what they serve at Fox Brothers. It is juicy and fatty, which is especially nice since brisket is, in Georgia, too often served a little dried out. I can’t recommend this highly enough.

Also, all of the meats come from reliable sources, known well to food hobbyists: Patak (GA), Creekstone (KS), Springer Mountain (GA), and Cheshire Farms (NC). They get their ice cream from High Road here in Atlanta. I certainly appreciate the transparency and the commitment to good sources. 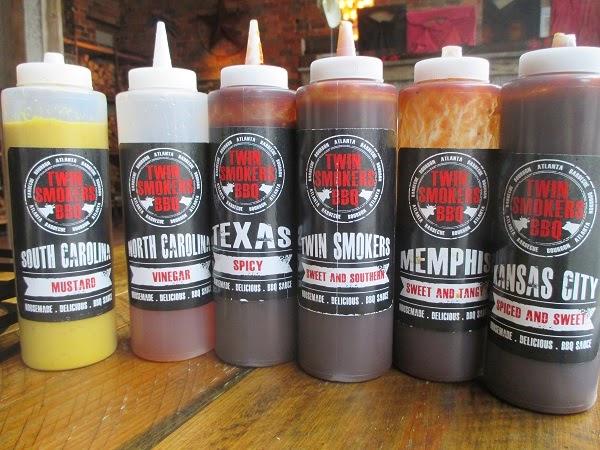 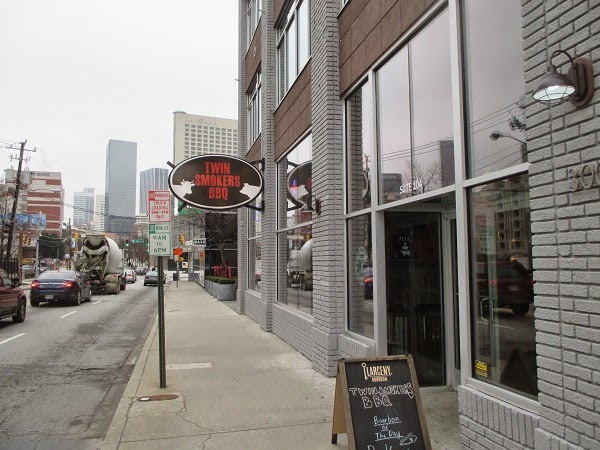 Like The Smoke Ring, another newer barbecue-bourbon joint with a corporate edge and which isn’t too far away, they’re serving up some good food here and there isn’t anything wrong with that. Time and entropy will eventually whittle away the places that exemplified Atlanta barbecue thirty years ago (think of “The Three Olds:” Old Hickory House, Old Brick Pit, and Old South, for example, or Barbecue Kitchen), and something will have to rise to replace them. Perhaps the persnickety and the traditionalists might complain that these kinds of places are following the trends that Fox Brothers, Heirloom Market, and Sweet Auburn started, working deliberately from a playbook rather than evolving organically, but with brisket this good, it’s difficult to argue against it too loudly. I’d like to come back for more of it very soon, and also try the beef ribs.

Incidentally, I’m fortunate to have free parking about five minutes’ walk away. However, there’s a deck across the street, and Twin Smokers will validate you for up to three hours in it, which is enough time to enjoy lunch or supper and then get some exercise in Centennial Olympic Park after your meal.

*note: Fox Brothers’ social media team dropped me a tweet on 2/8 to inform that both they and Heirloom Market use Oylers, making at least three in Atlanta.

(As noted, this was a media event and my meal was complimentary. It’s our policy to always note when we’ve received our meal without charge. If you would like to invite us to your restaurant’s media events or product launches, please drop Grant a line at gmslegion@gmail.com .)