People sometimes ask us the same question that I asked once upon a time when I have noticed one of our fellow hobbyists announcing that they were having a baby: will this change your eating routines? For a long time – and I mean absolutely no disrespect at all to other writers who have cut down on their dining out or posting in the wake of having kids – our three year-old didn’t impact our routine very much at all. We just didn’t let him! That kid was in his baby seat at Brandi’s World Famous Hot Dogs the day after we brought him home, and he’s been with us practically ever since. Most of the time, he’s been really good, keeps reasonably quiet, and not a single bagel has been thrown across a restaurant. He’s kind of bad, lately, about wanting to stand up in his chair, but most three year-olds try to get away with that, and on the whole, if you’d asked me anytime from his birth in the spring of ’11 through the end of last year whether our boy has changed our routine, I’d have said “barely at all.”

And I’d be lying, because I finally realized that for the last six months, anytime we’ve taken this kid to any restaurant that serves food from any nation in Asia, poor Marie has only been able to eat fried rice. She has borne this burden stoically and silently, in part because she actually really likes fried rice and doesn’t mind sharing with him, but since last summer, whether we’ve gone to a Thai restaurant or to an Indonesian restaurant or to Pho Saigon, a Vietnamese-owned place just north of Macon and a few doors up from Fresh Air BBQ, Marie and he have split some fried rice (pork, com chien thit heo, here) and I have ordered something more interesting. 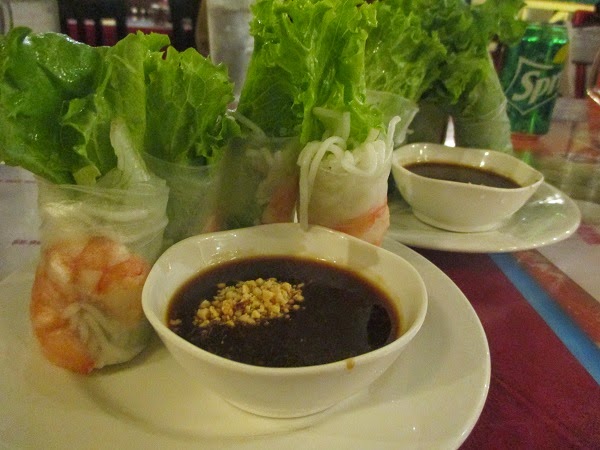 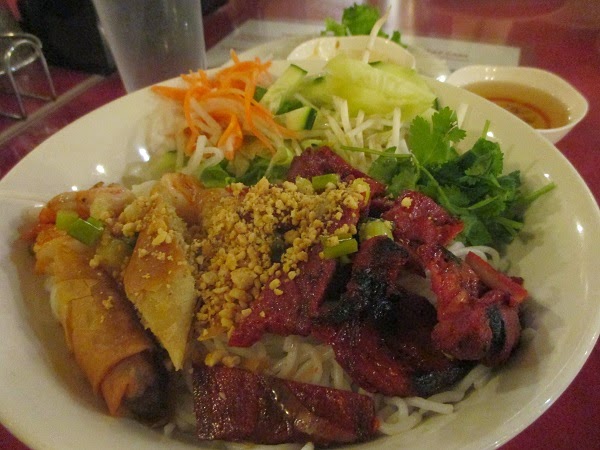 For example, I had the bun tom thit nuong cha gio, which is excellent grilled pork and shrimp with fried eggrolls over vermicelli. We had met our friends Rex and Rachel at this restaurant at his recommendation, and this is one of his go-to dishes. Rex has eaten here several times over the years, since Pho Saigon originally opened further south, at the Macon Mall, in 2007. The restaurant moved to this location about two years ago. Rex chose very well; the pork was really wonderful. The girlchild was a little less taken with her strawberry smoothie – she went through a boba tea phase, accompanied by a “taking photos of boba tea and posting them on Instagram” phase, and eventually quit – but enjoyed the spring rolls that she pilfered from Marie. 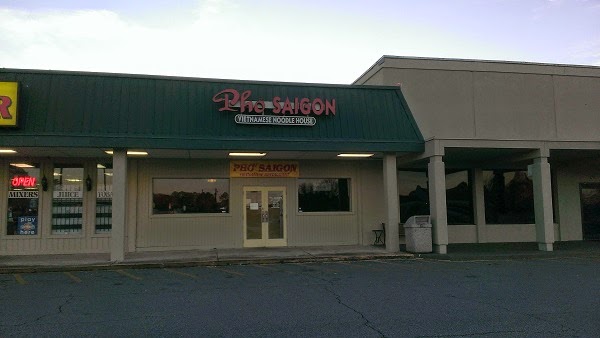 Pho Saigon is very interstate-friendly for travelers coming to Macon or passing through to pick up I-16; it’s in a strip mall on Riverside not far from the S&S Cafeteria. Rex, awesomely, went back a couple of days later and took the photo above for me, since it was pitch dark when we were there. Thanks, Rex!

Anyway, it’s a fine little family-owned business where the family’s kids can be found in a room to the side that they’ve converted to a playroom. There’s an adorable note penciled on the door explaining that the room is for kids only, but that parents can come in, too. The kids greeted me with smiles and friendly hellos when I popped my head in. Our boy was, after all the miles of road from Florida, surprisingly not in the mood to run around with anybody. He refused to nap the whole trip and wouldn’t leave Marie’s side.

While we still know very, very little about Vietnamese food as we have sampled so little, I really enjoyed the flavors of the chicken and shrimp, and would say that my meal was on par with what I’ve enjoyed at Cơm and Château de Saigòn in Atlanta, although Nam Phuong is still, so far, my favorite Vietnamese restaurant. As for Marie and this fried rice issue, well, I’ll spoil ahead that next Friday, we’ll have a story about a Malaysian restaurant where, while she didn’t order fried rice, she did go “tame” to share with the three year-old. Seriously, though, the next time the three of us are out somewhere together, she’ll have the chance to order something more wild or fun or unknown, and I’ll share with Little Mister Picky. Y’all keep me honest, okay, readers?