This road trip was the first time that my daughter had been to Charlotte, and it didn’t take her long to begin pestering me for a summer visit. Trouble started when she realized they have 7-11s in this area and she could get a Slurpee in one of seven hundred and eleven flavors – including, I must add, Cheerwine, which is the greatest thing I ever heard of – and so we pulled into a 7-11 in Rock Hill to take advantage of their wonderful $1.73 gasoline and she danced out with an orange and cream Slurpee. Then we drove past Carowinds, a roller coaster-packed amusement park along I-77 and she wondered whether that really tall one might be taller than Goliath at Six Flags Over Georgia. It is. Intimidator, which opened four years later, is 32 feet taller, and peaks at 80 mph, compared to Goliath’s 70. Then we drove past what appeared to be a three-story Target on the way to supper and she had her face pressed against the glass.

We were off to get some more barbecue, this time at Midwood Smokehouse, which opened in 2011 and which most writers and hobbyists in the area believe is either the very best barbecue in the Charlotte area or pretty darn close to it. Among the restaurant’s notable fans are Big Wayner, whose quite awesome BBQ Blog began right around the time that ours did, and the Barbecue Bros, who rank it as the best brick-and-mortar restaurant in town. A food truck, Boone’s Bar-B-Q Kitchen, takes their very top honor.

I’ve been exchanging emails and links for some time with Monk, one of the three Barbecue Bros, and hoped that he could join us. Both he and one of his fellow Bros, Speedy, met us at Midwood at 4, which was awfully well-timed since the restaurant got completely packed right behind us, and awfully convenient since it meant we could sample lots of meat together. I really do like their blog, which principally covers barbecue stories, experiences, and news from North Carolina and from Texas, where the third Bro, Rudy, resides. If you like the barbecue stories that we present, definitely bookmark theirs, because it’s lots of fun. 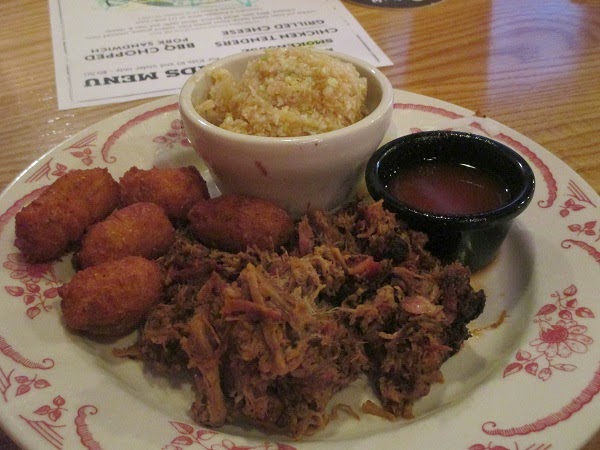 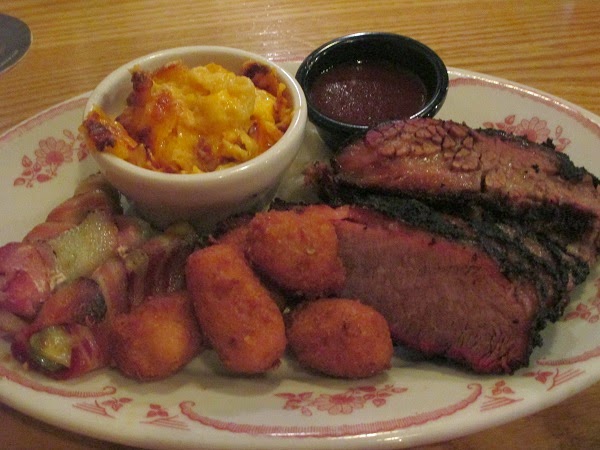 Midwood Smokehouse is named for the Charlotte neighborhood where it resides. It’s owned by Frank Scibelli, who also owns some other well-regarded restaurants in town, like Mama Ricotta’s, which was his first place, and which opened in 1992, Paco’s Tacos, and Bad Daddy’s Burger Bar, each of which has a reputation for great food and lots of local beers. In this regard, Midwood is similar to some of the Atlanta-area barbecue places that I’ve mentioned recently that are owned by a partnership group that manages several types of local restaurants. Scibelli is said to have spent lots of time crafting the right approach to barbecue and, after years of research, concluded that J&R Manufacturing in Texas makes the best wood smoker on the market.

Midwood’s smoker is the only J&R in Charlotte; an as-yet-unidentified barbecue joint in Winston-Salem is said to have the only other one in North Carolina. While Marie and the girlchild entertained the three year-old, the Bros and I got to get a good look at the smoker in the kitchen – as I mentioned a few chapters back, I got to see a J&R for the very first time just a couple of weeks previously at Twin Smokers BBQ in Atlanta – and I noted the distance between the firebox (accessible from outside) and the rotisserie of meats, including the astonishing bacon-wrapped jalapenos (which only go on for about twenty minutes). This reminded me of a few places like Chuck Wagon Diner in Fayetteville TN and Hickory Pig BBQ in Gainesville GA, whose outdoor pits are constructed to use a rush of oxygen between the fire and the meat to drive the smoke. 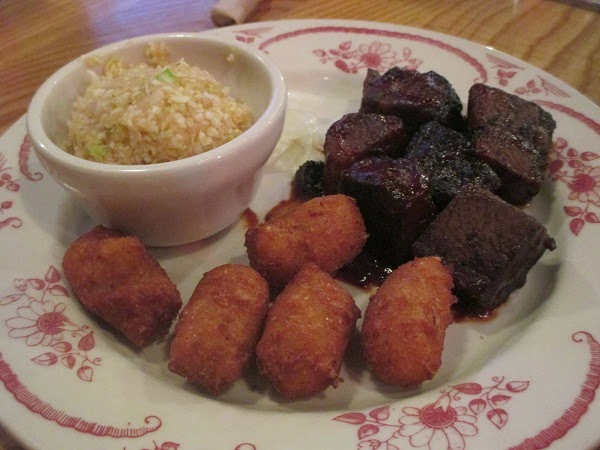 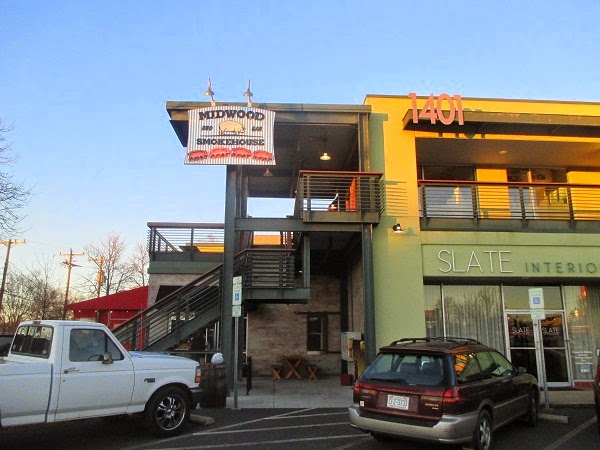 While the results at Atlanta’s Twin Smokers BBQ range from average to excellent, everything at Midwood Smokehouse was really, really great. Between us, we enjoyed brisket, burnt ends, and chopped pork. (The rest of my family all enjoyed desserts, for some baffling reason.) The beef was very good, and while I’ve had very little beef in North Carolina restaurants – possibly, upon reflection, none whatsoever – and nothing regional to make comparisons, I was very pleased with it. The pork, however, was more than just pleasing; it was outstanding. In Charlotte, I have a soft spot for Bill Spoon’s, which we really should revisit the next time we’re in town, but I have to agree that this might be the best chopped pork in the area. It’s so smoky and so full of flavor.

Small plates at Midwood only come with a single side, not two as in most barbecue restaurants, but I thought that the red slaw – as originated in Lexington NC and often seen in the Piedmont Triad cities – was really good. We never get the chance to taste this in Atlanta, so I’m always happy to order it when I see it. And the bacon-wrapped peppers, which Monk ordered alongside his brisket, were just amazing. I could happily eat a whole plate of these alongside a bottle of Highlands’ Oatmeal Porter.

Another great thing about the Midwood neighborhood is that this place is just a couple of doors down from Lunchbox Records. I’m happy to report that the girlchild has recently discovered vinyl. Sadly, she has not discovered how to stop herself from spending all her money on makeup instead of vinyl, prompting lots of pleading for Daddy to shell out the thirty-some dollars that labels now charge for Belle & Sebastian records. Speedy had to leave for another engagement, but Monk walked down there with us to browse, and after just a couple of minutes, I can report that Lunchbox is a very good store indeed. I’d like to go back someday with more time and cash to spare, although I suppose that would mean we’d have one fewer chance to visit barbecue joints and drive-ins, what with all the amusement parks and Targets that we have to visit as well. There’s just not quite as much time to eat when the girlchild has shopping and roller coastering to do.

Other blog posts about Midwood Smokehouse: