And so the question was asked, what should we eat next in Charlotte? Queen City Q was probably the obvious choice, but they’re located right by the local arena, which was hosting a Hornets game that night. The next choice would be a place that I actually visited once before, Kyle Fletcher’s in Gastonia. The girlchild, her older brother, and I had lunch here while passing through on our way to Toronto in 2006 and I would love to try it again. Unfortunately, this restaurant is just insanely popular on Saturday evenings. We were lucky to find a parking place, and after milling with several other guests inside the door, concluded that the hyper three year-old couldn’t wait the 45 minutes-plus that they were quoting, so I took a picture of the sign with the nice sunset behind it and activated Plan C. 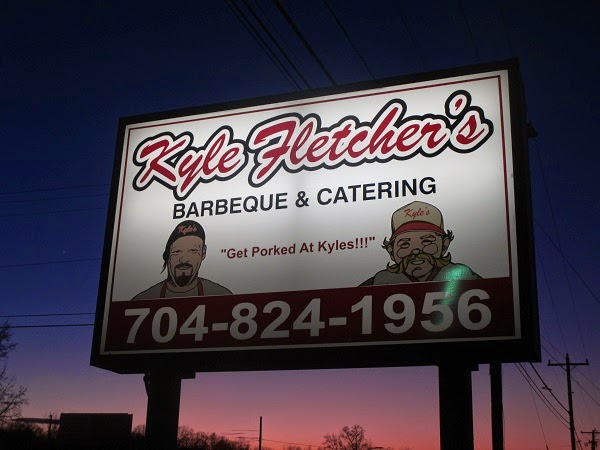 I was last in Gastonia in March of 2014 and visited R.O.’s Bar-B-Q, a place that everybody who is curious about regional food specialties absolutely needs to visit. There, armies of guests – although, it must be said, predominantly older guests – have been enjoying a completely curious “slawce,” which is kind of what happens when you make slaw from Thousand Island dressing instead of mayonnaise.

R.O.’s is the best-known place in town to offer this downright weird concoction, thanks to stories about it from nationally-known writers like John T. Edge and Jane and Michael Stern. But Edge, writing in Southern Belly, had also mentioned that some other Gastonia-area places offer the slaw on their pork sandwiches, which are not wood-smoked, but roasted on an indoor gas oven. Edge mentioned Black’s as another place to get it, and so we plugged the address into Waze and moseyed on over there.

Now, when I went to R.O.’s, I ordered the sandwich sliced and with the slaw / slawce on the side, so as to appreciate each ingredient on its own. At Black’s, I just went local and had a minced sandwich with slaw, which is how most people order the barbecue here. We sat down – everybody else was waiting for the next, final stop for one last meal – and I glimpsed the group at the table next to us enjoying this pink-brown stuff all over their hot dogs. I didn’t point this out to my family; I didn’t tell them why I picked Black’s, nor did I remind Marie about R.O.’s. I just waited for the sandwich to arrive, and unwrapped the ugliest, ugliest, ugliest barbecue sandwich that anybody has ever seen. 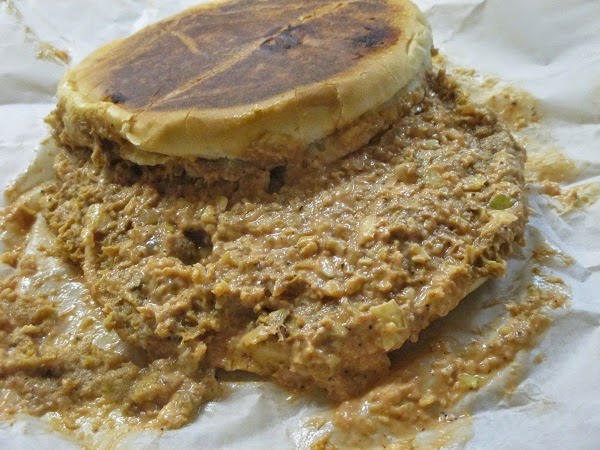 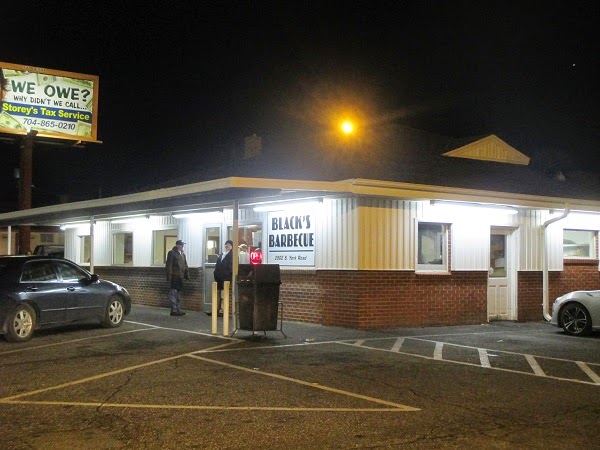 R.O.’s and Black’s generate shock and dismay from barbecue lovers far and wide. You remember that song on ABC Saturday mornings, with Louie the Lifeguard singing “Don’t Drown Your Food,” right? Never mind the indoor gas oven, nobody should do this to good pork. You can read horror stories from Memphians and Texans about what mutant monstrosity they had been served in this lovely little town, and I’m sure any of the Joneses of Skylight Inn would need a stiff drink after watching what happens in the kitchen here.

Sliced and with a small amount of the slawce a year ago at R.O.’s, I found this style to be a cute curiosity. Whipped around and minced in an Acme blender like this mess was, even I could only manage a couple of bites. Marie and the girlchild refused it entirely. The three year-old said it wasn’t bad. It wasn’t. It was horrible.

Make no mistake: I absolutely love that this place and this style exists. In a world of creeping globalization and homogeneity, I applaud Gaston County for keeping this tradition alive, and thank every one of Black’s customers for spending their money locally. I hope that Black’s and R.O.’s never shut their doors and that this local treat always sticks around for travelers and explorers to sample. And I also hope that none of this mess ever passes my lips again.

On the other hand, one thing in Gastonia that I definitely want to have again is grape ice cream. Finally, after all these years of mentioning grape ice cream – usually in conjunction with Kay’s and Kay’s Kastles – I had some of this stuff from the venerable Tony’s Ice Cream, which is celebrating its 100th anniversary this year. 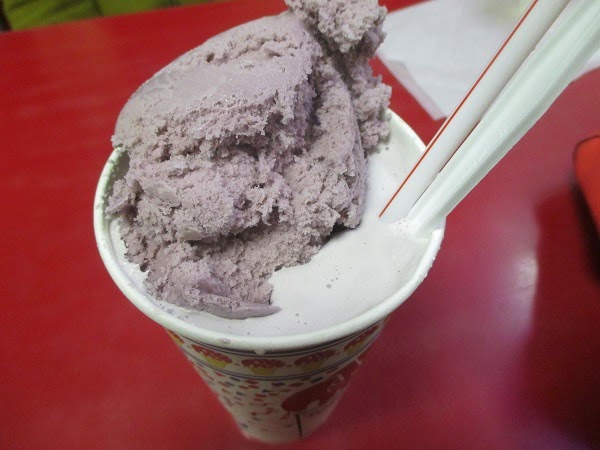 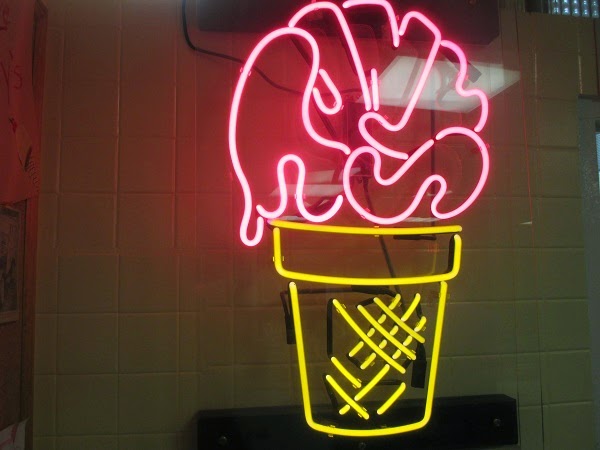 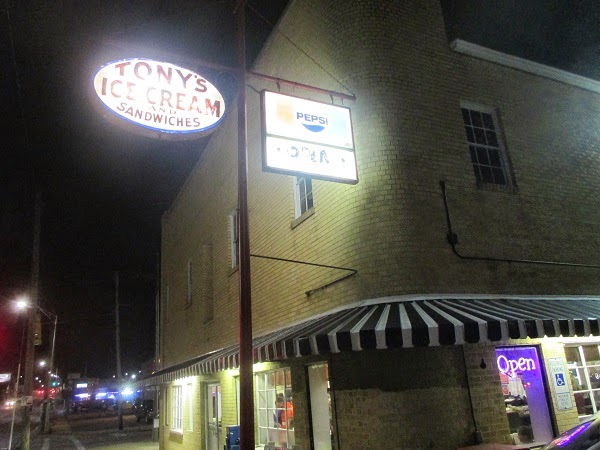 The previous trip to Tony’s had me curling my lip. I had ordered a cherry vanilla milkshake and then noticed that they served grape, in fact, to hear the staff tell it, originating the flavor not long after opening. I did not want to be one of those disagreeable customers who changes an order midway through its construction, but nor could I justify two milkshakes either! So I said “next time,” and decided immediately that our January 2015 Carolina trip would be up this way, unless we got up here before then.

This time, I learned that grape was a very early flavor at Tony’s, because the Ganetta family, recent immigrants, had long enjoyed grape gelato and sherbets in Italy, and once they got a plant up and running to make their own ice cream, they set about replicating the taste. They had to create it as traditional ice cream, because there was no market for gelato in America yet. Nobody knew what that was. There was some regional cross-pollination over the next few decades, and at least one other ice cream company in the southeast – Tennessee’s Kay’s – made their own grape ice cream. Today, some of the older dairy bars in northern Alabama, such as Kreme Delite in Athens and Bowen’s in Henagar, still sell grape milkshakes, a holdover from Kay’s dominance of the Chattanooga region, but made today with vanilla ice cream and either grape syrup or (more likely) a bottle of Fanta.

Other than that, grape ice cream seems to be completely unfamiliar to most of us. You can possibly find grape gelato at lots of places these days now that gelato has become a known quantity, but if you can get grape ice cream anywhere but Tony’s, I sure would like to hear about it. Everybody in our family enjoyed their ice cream here; Tony’s is just a fantastic place to stop. An older fellow noticed me snapping pictures and volunteered that he was 79 years old, has lived in Gastonia all his life, and sure did appreciate us stopping to visit the city’s beloved Tony’s Ice Cream.

We were making our way to the car, Marie and I grumbling about who was the more tired and who should take the wheel, and she had about agreed that if she could sip something caffeinated for an hour or so, she might become alert enough for a few miles’ driving. We passed the menu board as I was saying “Let’s get the baby buckled in–” and then I noticed the very unusual words SWEET TEA SMOOTHIE above my head.

I turned to Marie and said “I think I found your caffeinated drink.” Ain’t Gastonia great?