Exploring restaurants and writing this blog occasionally sees us finding quiet bits of history that really don’t seem to have been documented much, anywhere. Take Hodge’s Bar-B-Que on Candler Road, for example. I noticed the old place, on the left going north from I-20, while in the neighborhood many months ago, along with what turned out to be a much newer barbecue joint, Papa Joe’s. I flipped a coin to choose which one to visit first, and this place didn’t make it, so it went into the “when it’s convenient” pile, which is the much longer edition of the “go here, soon” document.

Go ahead and Google Hodge’s. I’ll wait. Not a lot out there for a fifty year-old restaurant, is there? I had no idea that this was one of Atlanta’s oldest surviving barbecue restaurants. According to an employee, civil rights meetings were held here regularly in the mid-sixties. Interestingly, like the much better-known Paschal’s, another restaurant which we all know for its years hosting meetings of civil rights leaders and activists, the business has quietly begun referring to itself on some signage and carry-out menus as “Hodge’s Legacy.”

It doesn’t look like much. The building is in bad decay, and the business next door is long closed. Part of the parking lot is given over to three decrepit, rotting old inter-city buses. The front room is a big, open, cafeteria line, with the steam trays in front of a pretty huge indoor pit, the steel doors able to slide open for staff to pull out chicken, ribs, and pulled pork when the meats in the trays get too low. Our server was particularly proud of the meat loaf, and recommended that over the barbecue, if that’s an indicator. 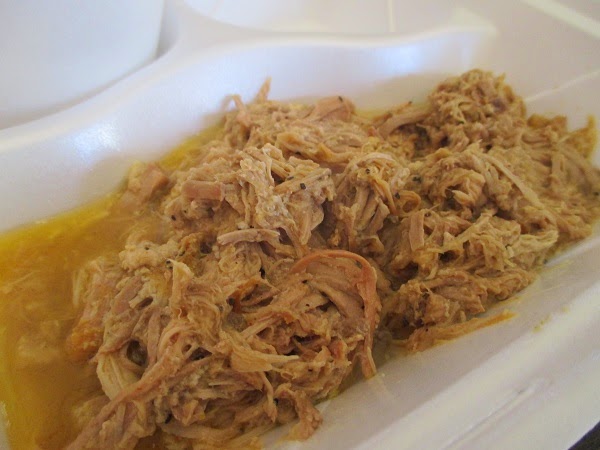 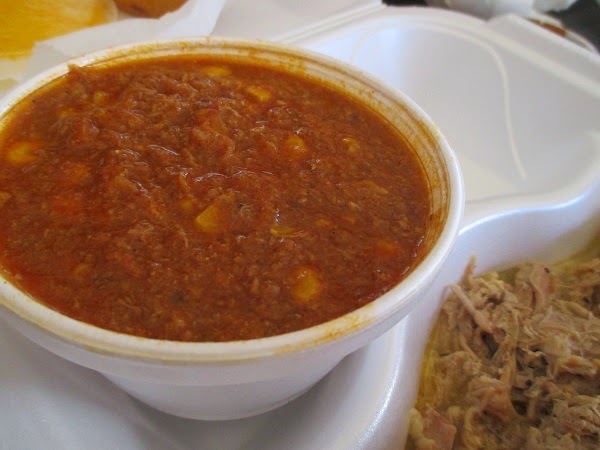 I arrived with both the children one Saturday last month and found them a little unprepared to start serving. I ordered a pulled pork sandwich, but their buns had not arrived yet, so I took a sandwich’s worth of meat with a cornbread muffin instead, and a bowl of Brunswick stew. The kids also had cornbread and split four more sides.

As the photo above shows, the pork comes out of the steam tray with a lot of water. This was very surprising and really disappointing. There’s this beautiful indoor pit, and lots of smoke, and the preparation guarantees that you cannot taste any of it. I was grateful not to have had a bun for my barbecue, because there was so much water in the meat that the bread would have disintegrated and it would have required a fork anyway. I could detect just enough flavor that, had it come straight from the pit, it might have been pretty good. A little pepper – okay, a lot – and a bit of sticky brown sweet sauce and the meal was salvaged somewhat.

The stew was much, much better. I absolutely loved it. Completely full of meat and with a good tomato taste, I would have been happy with a giant bucket of that. The children were pleased with their veggies, mac and cheese, and potato salad. Maybe we should have gone with the meat loaf after all; everything else was quite good. 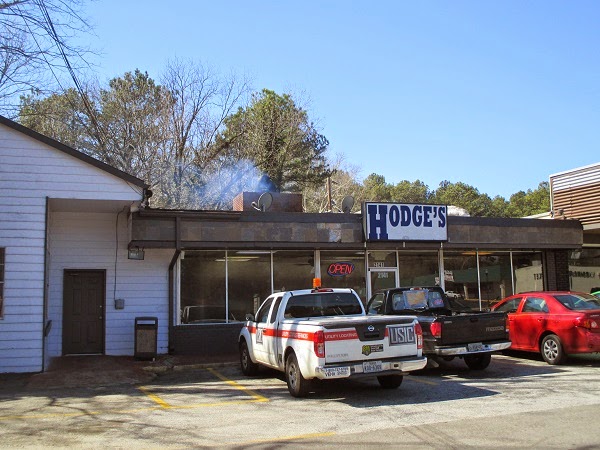 I really got the impression that Hodge’s is much more of a meat-and-three place than a barbecue restaurant, but, weeks after our visit, I’m still surprised by how little information is available about this place. No, it’s far from Atlanta’s best pulled pork, but the stew is phenomenal, and its indoor brick pit is pretty amazingly uncommon in this town. I won’t suggest that it’s a must-visit, but if you’d like a sense of history and some great sides, then it’s worth a stop.