I’m not sure why I became so certain that Steverino’s, reborn in some other, non-Athens, place, was certain to disappoint, but I was wrong, wrong, wrong.

Steverino’s, you see, was one of my favorite restaurants in Athens when I was a student up there, and for many years after. I found it in 1989 – it originally opened in 1974 – and while many of my memories might have been dulled by time, by the marathon games of Illuminati that we usually played in the dorms while eating their big sandwiches, and occasionally by a bottle or two of rum, I do recall loving the place over all of its competitors. By 1989, they had picked up the wonderful shtick of offering bottles or cans of quite a few small market sodas in addition to Coke products, and so it was through Steverino’s that I was introduced to Buffalo Rock, along with Vernor’s, Stewart’s, and the dearly-missed Budwine.

But mainly I remember that bread. The sandwiches, handed over in foil, came toasted, with the edges ever so slightly charred. Those were terrific sandwiches.

My old friend Matt moved to Athens after I did, and we met in ’94 or ’95 or about then. He also found himself in love with Steverino’s, in particular their chicken wings. They were enormous. You ordered ten wings, you got five chickens.

Steverino’s had actually grown and then contracted by the time we found them. I genuinely had not known, before I read Andy’s story at Burgers, Barbecue and Everything Else, that in the early 1980s there had been a Steverino’s in Atlanta, opposite the Varsity on Spring Street, in that corner space that’s been home to Goodfellas for the last several years. The restaurant’s web site says that there were others, but I don’t yet know where they were.

Steverino’s underwent at least one ownership change in the 2000s and was briefly closed. When they reopened in 2005, Matt and I went to Athens to check them out – and, 18 months before Marie and I started dating, head over to her house to play Illuminati – and found the chicken wings much smaller than they had been, but everything still tasted just right otherwise.

Matt dropped me a line last month, saying that he had a free day and would like to get lunch somewhere. By chance, the previous Friday, Marie and I had supper at Dave’s Cosmic Subs before visiting Adam and Emily to play, that’s right, Illuminati, and the whole experience was supernaturally nostalgic, because Dave’s really does remind me of Steverino’s, right down to the neat sodas available (Fanta Birch Beer!!)

So yeah, lunch sounded good. That Steverino’s in Duluth… maybe we should take the risk. 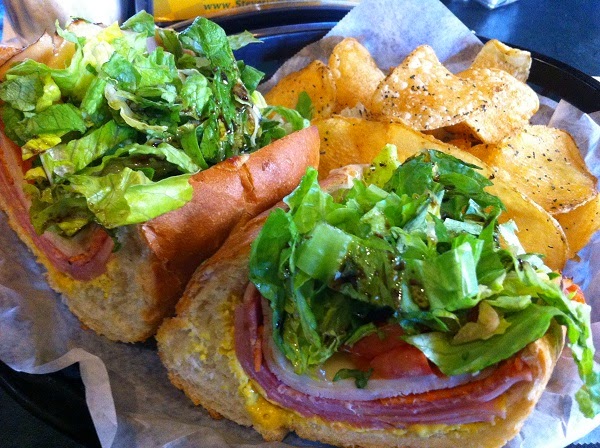 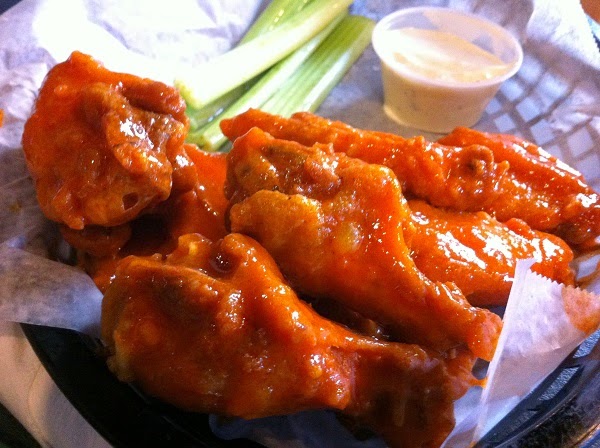 Henry Harrington is the co-owner of Steverino’s, which relocated here from Athens in 2008. Several news stories at the time (including this one from the old NorthFulton.com) said that Harrington kept the original owner, Jim Cellini, on as a consultant. Harrington had the unusual challenge of turning Steverino’s from a cheap beer pub with a big delivery-to-dorms component into a more rounded family place, catching the crowds visiting one of the two or three live theaters in downtown Duluth and the people who spend their evenings on the small town green. They’ve been here for seven years, and not all that business can come from nostalgic old students.

So Matt and I ordered some old standards. I had the classic Steverino’s sub and he had ten wings. They were very much like we remembered them, although my memory tells me that, once upon a time, they cut the bread into a traditional heel-n-crown instead of cutting out one side as they do now. The wings were much smaller, but the medium sauce was exactly as Matt remembered it. So even without the pinball, it was a very satisfactory experience, even if our conversation was more about in-laws and potty training than it might’ve been in the nineties. 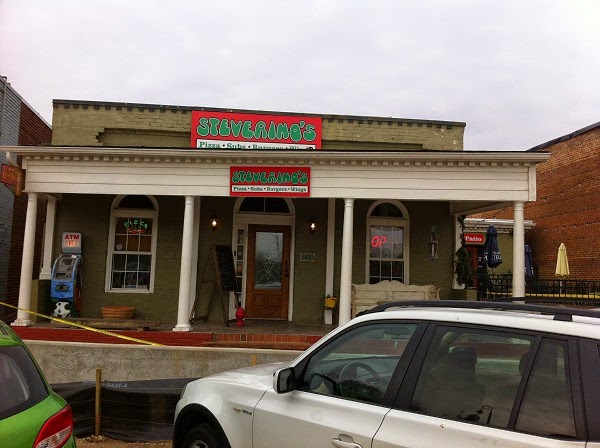 Incidentally, a reader had asked me whether I knew what the Steverino’s “classic” sauce was. I had half a bad memory that it was a little like that not-quite-mayonnaise called Durkee’s Sauce, but then again, my memory simply cannot be trusted. My server went back and got somebody in the kitchen to confirm it precisely: it’s just a half-and-half blend of mayo and mustard. Really? That’s all? What do you know!

So, if you’re possessed by a rush of nostalgia, whether you found the place because you were wanting a pizza and sub and the deck at Sons of Italy was already packed, or you needed sustenance for a day of gaming in the Reed Hall basement, the Steverino’s in Duluth will hit at least 90% of your happy memory cells. It might even do the same for some of you old Yellow Jackets!