I’m not sure how I got the notion that Dave’s Cosmic Subs has been sitting on North Decatur by Emory forever, or that it was a locally-owned independent. It’s actually been here for less than a decade and is a franchise of a shop that opened in 1997 in a suburb of Cleveland called Chagrin Falls. A musician called Cosmic Dave Lombardy opened it after returning home to Ohio after many years in California singing lead for a band called Foreplay – no, not the jazz combo; they’re spelled Fourplay – and deciding that his shtick would be paying tribute to the sixties with a lot of groovy music and colorful design. He wouldn’t be the first to choose psychedelic as the basis for his restaurant design (see: Mellow Mushroom) and nor would he be the last (see: Peace, Love and Pizza), but he might have come up with the tastiest sandwich.

One day last month, I beat the rain over to Emory and looked over the local store’s dizzying choices of sandwiches. Everything sounded really good, but I went with one of their veggie subs – in a very pleasant surprise, they have at least three different vegetarian sandwiches on the menu – called the Haight-Ashbury. It comes with Romaine Lettuce, three kinds of peppers (red, green, and banana), tomatoes, onions, provolone, herbs and Dave’s Cosmic Sauce, which is a flavorful vinaigrette. 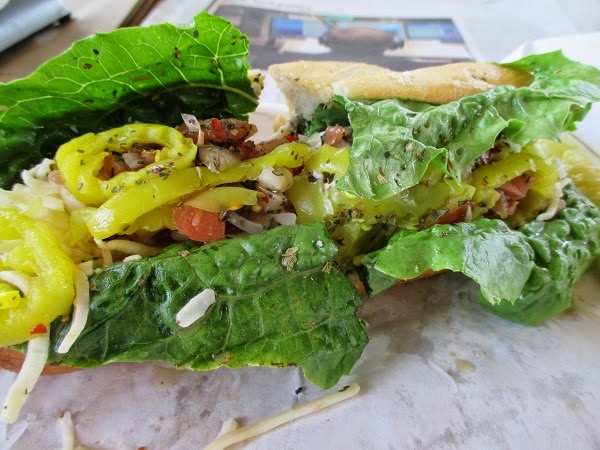 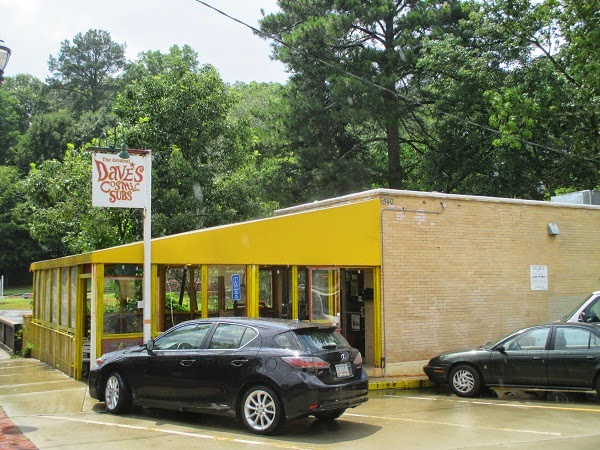 The sandwich, to be clear, was completely wonderful. I was reminded in the best possible way of the fantastic sandwiches that I used to enjoy at Steverino’s in Athens in the early 1990s, even down to being wrapped up in lots of heavy paper. College sub shops are the best, aren’t they? Heck, I even enjoyed this more than I enjoy my usual at Baldinos. Everything tasted so fresh and you really get a lot for your money.

I was also really pleased with the soda selection. Yeah, I know, most of you good readers who think about looking at blogs for drink ideas are into cocktails and who’s tending bar where, but I love drink stations, and this one not only had Barq’s Red Cream Soda, which you never see anywhere, but also Fanta Birch Beer, which I contend is the very best drink in the Coca-Cola portfolio. They don’t even have either of those in Freestyle machines, which is bizarre.

Well, I beat the rain to Emory, but it came down in sheets while I was there. Dave’s is in a tiny little building and all the seating is on a covered patio below street level. Steps lead down on the parking lot side, with a wheelchair ramp from the sidewalk. I was reading my newspaper and put my foot down into a splash. So much rain hit at once that it had come down the ramp and pooled under my table! I moved, waited it out, took a ghastly photo – well, unlike the colorful original in Ohio, this really is an ugly, easily-missed nothing of a building – and called it a fine lunch. A funny little drainage issue aside, this is a very, very good sandwich shop and I hope to stop in again sometime soon.