I’ve known for ages that there’s a second Baldinos in the Atlanta area, but I think I’ve got a pretty good reason for never stopping in before now. It’s my favorite place to get a big sandwich, and I eat at the one about five miles south of our house fairly often, as these things go, and didn’t really think it worth the mileage to ever drive all the way over to Buford Highway for something that we can get at home.

But one Friday last month, I was all sorts of wishy-washy and indecisive about what I wanted to eat for lunch. I thought about going to a new barbecue place in Buckhead, and headed north from downtown, but really didn’t feel like barbecue after all. So I went past the GA-400 exit and eventually pulled off at Clairmont, bound for Buford Highway. Maybe I wanted some tacos, and then a banh mi from Quoc Huong sounded good, and then it didn’t. Several traffic lights later, I was passing under I-285 and said to myself that a Baldinos Italian Battalion would hit the spot. Then I walked in, looked at the TV just to see time expire and Canada beat the U.S. in hockey and wasn’t in the mood for that, either. This is what happens when I don’t plan ahead. Fortunately, I refused to leave, and a Baldinos Special sub was perfectly satisfying, and I didn’t end up in Suwanee or Spartanburg or someplace. 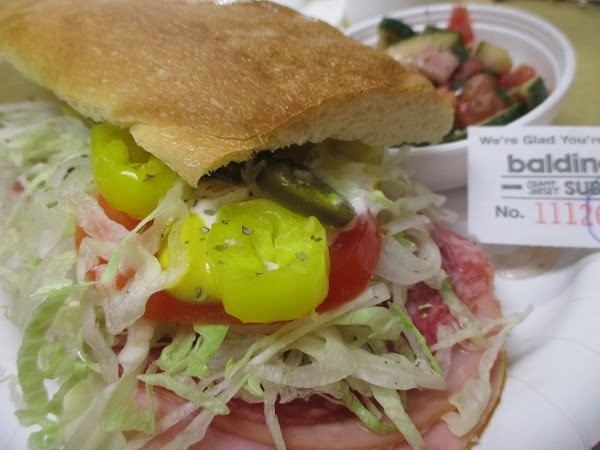 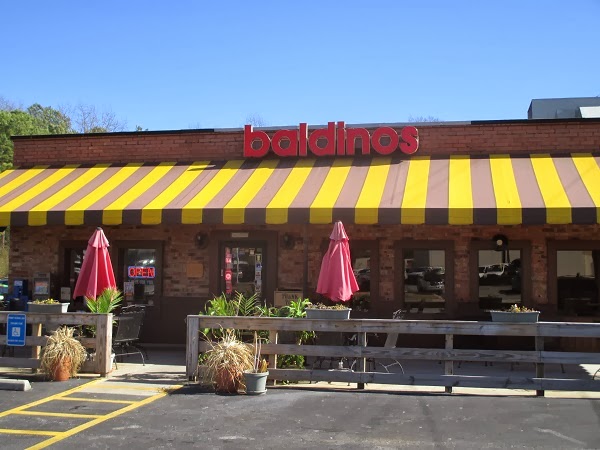 This Baldinos really emphasizes the Asbury Park connection of the chain’s founder more than the Marietta store does. Otherwise, the experience is absolutely identical. The founder, Bill Baer, is a Jersey boy who was frustrated by his inability to find a decent Jersey sub anywhere near the military bases around the southeast where he was stationed during his stint in the Marines in the early 1970s. This is why many of the Baldinos stores in Georgia and the Carolinas – and, more recently, northern Florida – are set up near bases, like the Hinesville store, which is a short drive from Fort Stewart, and the Marietta store, which is near Dobbins ARB. Baer opened the first Baldinos in Fayetteville, just down the road from one of the gates of Fort Bragg, in 1975.

Today, there are eleven stores in Georgia (the one in Hinesville, two in Augusta, six around Savannah, and the two here), seven around Fayetteville, and the newest one in Jacksonville. So it’s still a very small chain which is not really known outside its markets, but it has a core of devoted fans, including our family. I love what they do here. I like the freshly-baked bread a lot, and appreciate that they slice the meats to order instead of doing it the quicker and more efficient way of prepping everything ahead of time. I love that they’ll put cranberry sauce on your sub, even advertising such an odd thing, slipped right in with the “on request” items. Sweet peppers, hot peppers, cranberry sauce… what? Who does that?! One of these days, I’m going to order a turkey sub, with that mountain of shredded lettuce, and have some of that sauce on my sub. I’m not sure when that will be; even deviating from the Battalion to the Extra Special – they’re practically identical, except the Battalion has pepperoni – was a radical move for me.

The restaurant, a Buford Highway staple since the early 1980s, was still fairly crowded a little after the Friday lunch rush, and there was a long wait for sandwiches. Buford Highway has a deserved reputation as one of the south’s best corridors for sampling cuisines from other cultures, but it’s nice to know there’s also a place for comfort food from New Jersey. I have read quite a few raves from northern transplants who say that this place does them right, and better than anybody else in town. I have no experience in whether they’re “right,” but darned if anybody else in Atlanta does them better.