Remember how I was just saying literally one chapter ago how I was going to order vegetarian entrees in Asian-themed restaurants from now on? Well, then we got invited to try out the new spring menu items at Tin Drum Asiacafe, available through May, and that had to be temporarily abandoned.

And you remember how, last year, when we visited their then-newest store and I talked a lot about their new design and didn’t actually photograph it to show you? Well, I pulled up to their store in Roswell on Alpharetta Highway, camera ready, and found the place in the middle of construction. There’s a new grocery store called Sprouts going into this strip mall and they’re renovating the whole thing. Tin Drum is taking advantage of the construction to reconfigure the look of this store from the “unfinished” look that they had recently into the newer model, with the windowed storefront and open feel, but it’s not quite ready yet.

With that in mind, let’s have a look at these new menu items! 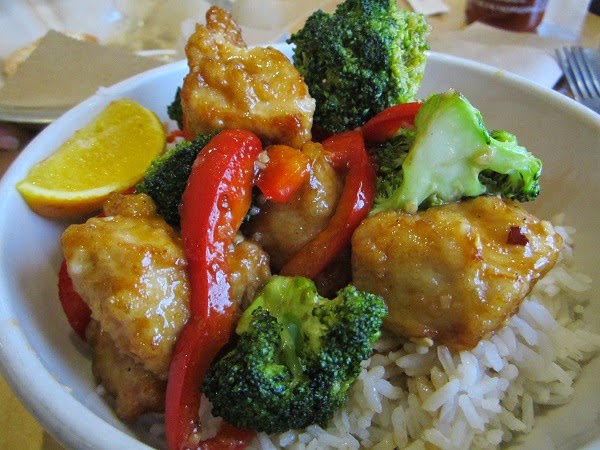 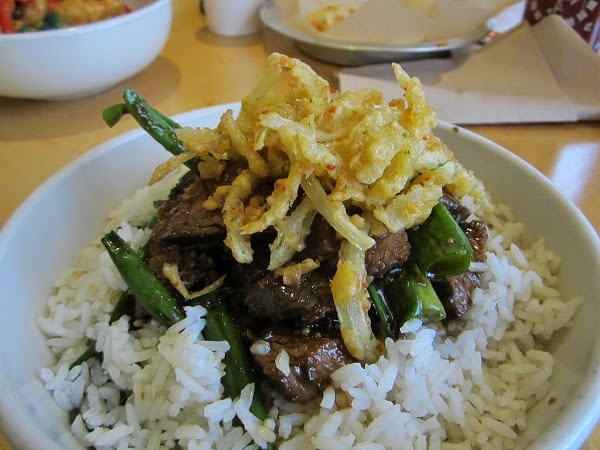 Each of them is a revisionist take on what you might call “American Chinese.” It’s taking a dish that we’re probably familiar with from malls and from Golden-This-Happy-That joints and preparing it with fresh ingredients and a lot more care. The Orange Ginger Chicken, for example, is made with broccoli and red pepper and a sweet orange sauce. However, it’s all much tastier than it was the last time that you had a similar entree at the “Brand X” sort of place, where the sauce comes in great big gallon packs. At Tin Drum, they make the sauce from scratch in each restaurant’s kitchen several times a week, using actual oranges instead of a chemical goop.

I haven’t had an order of Mongolian Beef in at least twenty years, and never really enjoyed it, but I was very pleased with the flavors in the new Mongolian Fiery Steak, which is cooked with green onions in a spicy sauce, and served with some crispy onion straws. We thought this was pretty good, and wouldn’t mind trying it again, but the Orange Ginger Chicken was our favorite of the two. 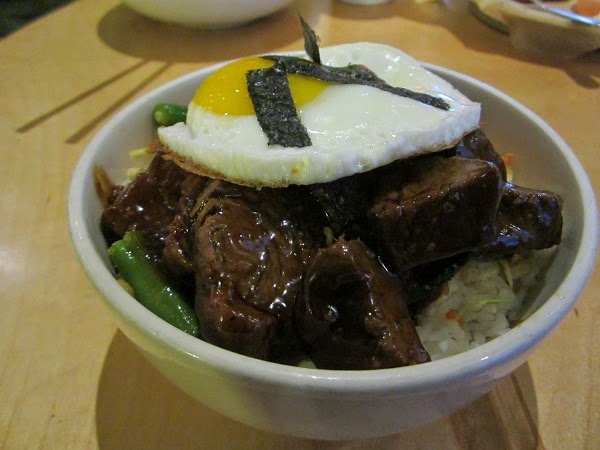 Along with the two new items, Tin Drum has returned a previous special to their regular menu. It’s called the Kickin’ Kimchi, and features steak in a sweet and spicy sauce, seaweed, and some mildly spicy kimchi underneath a fried egg. This was also really good, and I enjoyed hearing the anecdotes about how guests latched onto this dish when it was a special, and howled in protest when it moved on.

We’ve enjoyed Tin Drum a lot over the years, and while neither of the new entrees are likely to eclipse the Panang Curry in my affections – man, I like that a lot – they’re both pretty good and I do enjoy watching the restaurant create new dishes and experiment with new things. The team at the Roswell store is completely awesome, so don’t let the lack of signage while the shopping center is under construction discourage you from visiting them!

Other blog posts about Tin Drum: