I heard the most remarkably unkind and unfair assessment of the Moon Pie General Store from one of its neighbors in downtown Chattanooga after we visited here. She growled about them and – no joke – admonished us for taking our three year-old boy there, saying something slanderous. “Well, there’s supporting local business,” I said, not intending to get into an across-the-street skirmish, and concluded that I didn’t need to visit her establishment again. The Moon Pie General Store, after all, made us, and dozens of other people, feel welcome and nobody there badmouthed their fellow merchants.

Moon Pies have been around since 1917, when that spelling – Moon Pie – was the correct one. Sometime more recently, the Chattanooga Bakery, which makes the tasty things, smushed it into one word – MoonPie – for trademark reasons, I suppose. A Moon Pie – I’ll stick with that spelling, thanks – is a graham cracker and marshmallow sandwich covered, traditionally, in a chocolate coating. There are other flavors, like vanilla, orange, strawberry, salted caramel, lemon, and my favorite, banana. The salted caramel tastes exactly like butterscotch, and I don’t know what the orange actually tastes like because our son was being selfish and wouldn’t share his. They have imitators all over the world. I was describing them to a friend in England many years ago, and he told me they were called Wagon Wheels there.

Traditionally, they’re served with a bottle of RC Cola, and often packaged together for sale in roadside shops that offer lots of small market sodas. I have often complained that this makes no sense whatsoever, because RC Cola is from Columbus GA and Chattanooga is home to the even better Double Cola, who, God knows, could use the marketing boost. Nobody agrees with me. Well, everybody agrees that poor Double could use some help, but everybody likes Moon Pies packaged with an RC. 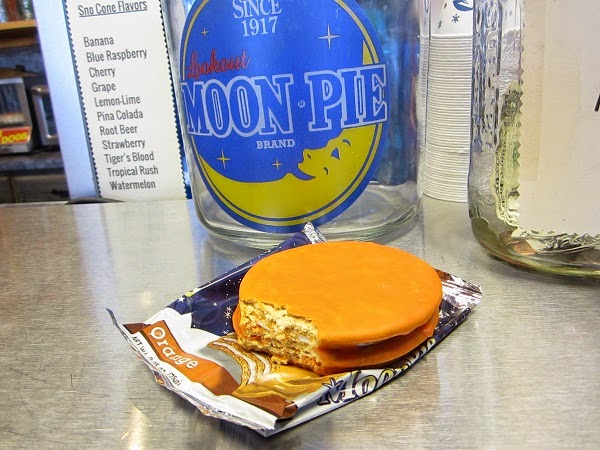 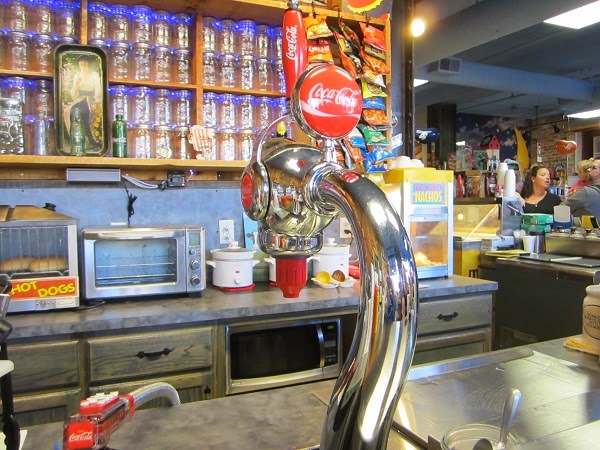 There’s a Moon Pie General Store in downtown Chattanooga, just a short walk from many of the large tourist attractions, and if you get there before 4, you can park in the lot at the end of the block for two bucks. We joined a mob looking around the gift shop shelves and lining up for ice cream. It’s Mayfield again, unfortunately (again, it’s political), which is really disappointing when Chattanooga is home to the far superior Clumpie’s.

The shelves are full of the same sort of country kitsch geegaws that you see at Cracker Barrel, plus you can load a box full of single-decker Moon Pies for 75 cents each, or double-deckers for 95 cents. At the lunch counter, they serve sandwiches and hot dogs, and thumb their nose at the traditional RC with a bunch of Coca-Cola products instead (what the heck?!). They make lots of dessert treats, including egg creams made the right way, with U-Bet syrup. My daughter skipped lunch to have a Birthday Cake milkshake here, although she declined the offer to have a chocolate Moon Pie crumbled in her glass, and I had a black-and-white ice cream soda. Marie mixed a box of assorted Moon Pies to bring home. 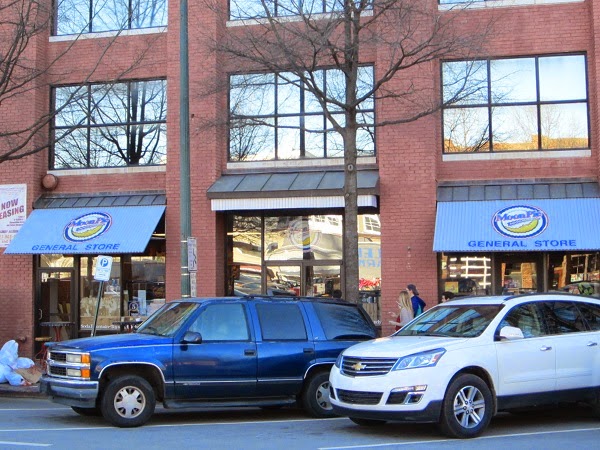 We kind of wish that the general store was no quite so touristy, and that they’d team with Double Cola – and, if not them, then with Pure Sodaworks! – instead of Coke, but it’s not a bad place for an ice cream treat or maybe a pimento cheese sandwich. Actually, the employees are all so superb and welcoming and wonderful that it’s more than “not bad,” it’s actually a pretty good suggestion. If you’re having fun at Creative Discovery Museum or the Tennessee Aquarium, or killing time before a Lookouts game, it’s worth the short walk to see whether the crowds are too crazy.