This is Marie, contributing an article about one of Jane Austen’s favorite dishes – or rather, the modern adulteration of it that I enjoyed but she’d likely not find exactly to her taste.

For my last birthday, I received a copy of Dinner with Mr. Darcy, a collection of recipes referencing the actual cooking of the times, along with references to various parts of the novels that talk about food. I found myself immediately wanting to try some of the recipes, settling on Haricot Mutton due to the note that it was one of Austen’s favorite dishes. I think I would be happier in those times than Grant would, as I enjoyed the resulting sparingly flavored dish more than he, even though I added the suggested thyme and bay leaf that weren’t in the recipe that Austen would have used!

I was immediately pushed into altering the recipe somewhat, as it is very difficult to obtain mutton, and turnips had (albeit briefly) vanished from the stores. I made do with parsnips, as they would have been used at the time and were similar enough. Also, I like them. 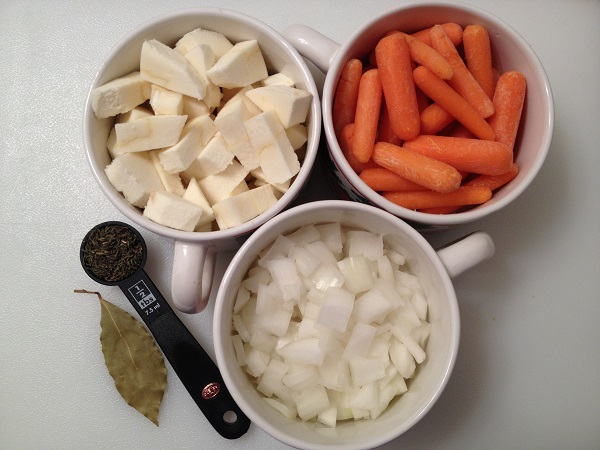 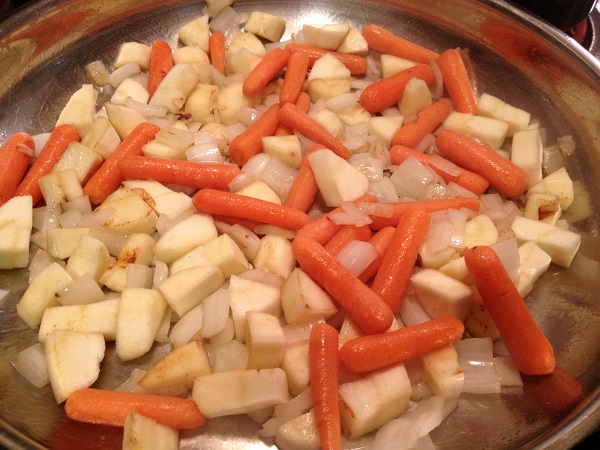 Haricot Mutton (or rather, lamb – as adapted by me)

3 lamb chops, bone-in
Vegetable oil for frying
2 parsnips, diced
a snack-sized package of baby carrots
butter
Half an onion,chopped
flour, seasoned with salt & pepper
lamb stock (obtained by boiling a spare lamb bone with some potato)
bay leaf and thyme to taste (I used a half tsp but then I really like thyme)
Worcestershire sauce (Austen would have used mushroom ketchup; although a recipe was provided, I work and therefore hadn’t time to make it ahead). 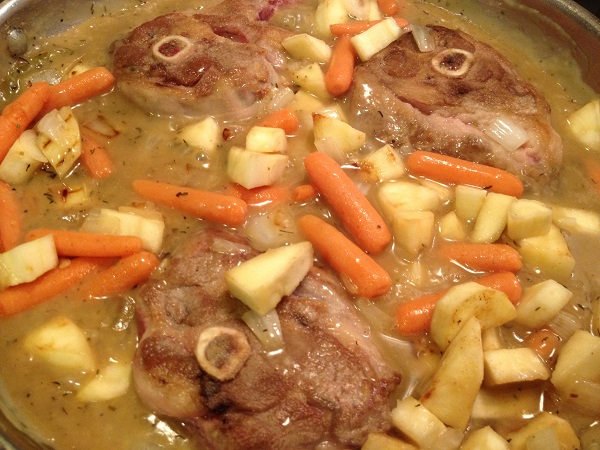 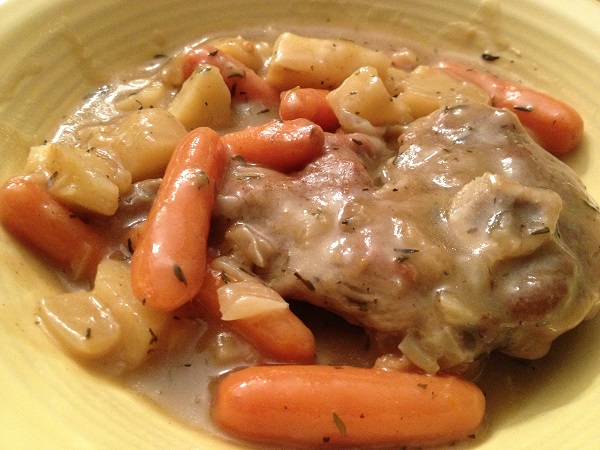 Trim the chops, setting aside the exterior bone, if left on, to make stock (note the yellow toothpick I had to use to pin one of the chops back together). Put those in a pot with some water and a potato or two (if desired) to boil. Use whatever other stock you have on hand if the butcher didn’t leave you enough bone to work with – you want some bones in the meat as it cooks (note – my chops weren’t excessively fatty, but you may need to skim or drain off some fat after browning the meat) Dust the chops with seasoned flour. Put oil in a large pan, brown the chops lightly and set aside.

Add the vegetables (the recipe calls for browning your onion in a separate pan to incorporate them into the gravy, but I wanted to use the lamb fat to soften the onion, and instead started the veggies in one part of the pan and did the onions with a little extra butter in another part, combining them when the onions went translucent.) Once the onions have softened, slip the veggies aside into a bowl. Add a pat of butter, if needed (depending on how much fat remains in the pan) and slowly add stock, whisking in a couple of tablespoons of sifted flour, stirring until the gravy has become smooth and thick. If you are using herbs, add them now, and bring the gravy to a boil. Return the meat and vegetables. Cover and cook on simmer for about 45 minutes, checking periodically. Add stock if needed. Remove bay leaf before serving.

The original recommendation was to cool, skim the fat, and reheat to serve, but I skipped that step as the chops were not very fatty to begin with, and I removed much of the fat with the excess bone that went to make stock. My leftovers didn’t have fat on the top anyway, as it had all been incorporated into the gravy – which, astonishingly to me, didn’t break under this abuse. The stock left over, which I reserve to use for something else, did have a fairly heavy skim of fat on top. You can use a gravy ladle to dip some out and discard it while still liquid, or use a baster to reach the stock underneath the floating fat to siphon it out for use in this recipe.

Dessert was intended to be cherries with meringue, from Sense & Sensibility; I figured to link Austen’s apparent favorite comfort food with the treats offered to Marianne by Mrs. Jennings, to comfort her broken heart. “‘Poor soul!’ cried Mrs. Jennings, as soon as [Marianne] was gone, ‘How it grieves me to see her! And I declare if she is not gone away without finishing her wine! And the dried cherries, too! Lord! Nothing seems to do her any good.'”

Sadly, even though I purchased and ate a bag of cherries every week for four weeks, even making jam out of some of them, somehow you, reader, very like Marianne, are left without any. I shall make that eventually and take some pictures.

One thought on “Food From Fiction 6: Jane Austen’s Haricot Lamb”