“Tell me, what were your first cinnamon rolls like? And didn’t the recipe look simple and pure and beautiful on the page? And the instructions your teacher gave you, before he left you to get on with it, were perfectly clear and covered everything?” – from Sunshine by Robin McKinley (Berkeley, 2003)

One of my very favorite books is called “Sunshine” by Robin McKinley. It’s about a coffeehouse baker who finds that she has more power than she thinks, and would rather not have found out as the discovery is made under the most stressful of circumstances. She’d rather be making muffins and pies and bread and her signature cinnamon rolls, but instead finds herself in the uncomfortable position of being able to do unlikely things that make a huge difference in the world. However, baking is her passion, so food and cooking are used as metaphors throughout.

The main character is described as being known for her “cinnamon rolls bigger than your head” and I knew I was not up to making rolls as big as that. In fact, the last time I tried making some cinnamon rolls with a yeast dough, the evidence of the attempt was quietly disposed of as a potentially hazardous substance. 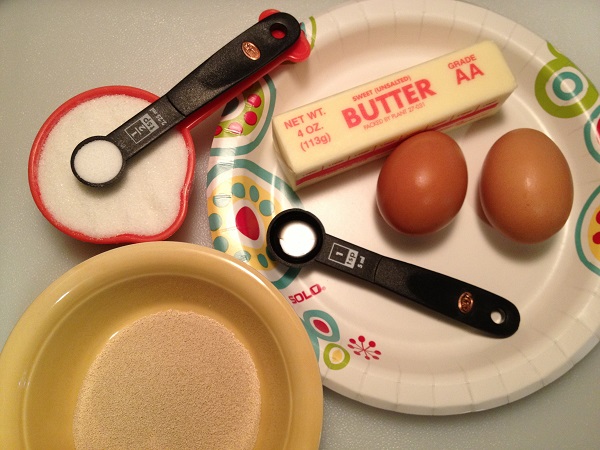 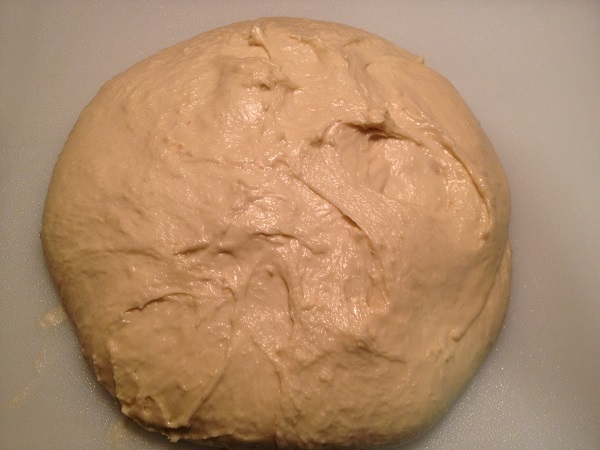 The book itself addresses that challenge, which in fact inspired me to give them another try. Although baking is used as an analogy for the main character to better understand the lessons she is (unwillingly) taking in magic, it also applies quite generally to anything that someone might try for the first time. In the following quote, Sunshine (the main character) and Yolande, one of her allies and a magician, are talking about how difficult Sunshine is finding the learning process.

Yolande starts and Sunshine replies: “Tell me, what were your first cinnamon rolls like? And didn’t the recipe look simple and pure and beautiful on the page? And the instructions your teacher gave you, before he left you to get on with it, were perfectly clear and covered everything?” I smiled reminiscently, stirring sugar into my tea. “They were little round bricks. I still don’t know how I did it. They got heavier. They can’t have weighed more than the flour I put into them, you know? but I swear they did.” 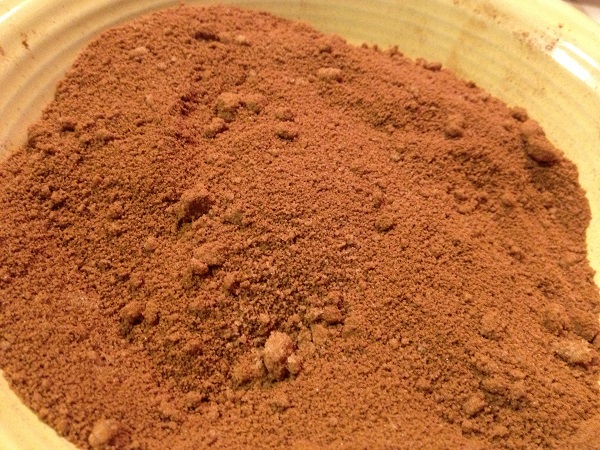 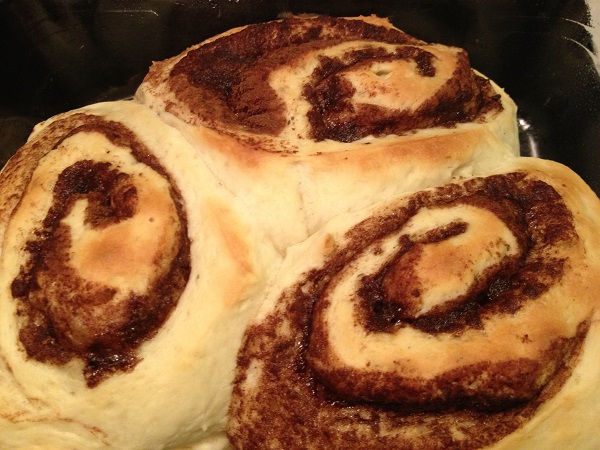 This recipe, in its original form, can be found at http://whatscookingamerica.net/Bread/CinnamonRollsFantastic.htm

Note: the “I” referred to below is the author’s, not mine, but I only left in the references that I personally experienced. Please check her blog for a far more detailed step-by-step description of the process!

*I didn’t use it and the rolls turned out fine

Mix the dough with a standup mixer, food processor, or bread machine, whichever works best, removing when the dough is elastic (make sure if you use a bread machine to remove the dough before it rises)

After dough has risen, using your rolling pin, roll and stretch the dough into approximately a 15 x 24-inch rectangle. Make sure to cover your pin liberally in flour to reduce sticking.

Brush the 1/2 cup softened butter (listed below in the Cinnamon Filling) over the top of the dough with a rubber spatula or a pastry brush. Sprinkle Cinnamon Filling over the butter on the prepared dough. Starting with long edge, roll up dough loosely; pinch seams to seal.

With a knife, lightly mark roll into 1 1/2-inch sections. Use a sharp knife or slide a 12-inch piece of (unflavored) dental floss or heavy thread underneath. By bringing the ends of the floss up and crossing them at the top of each mark, you can cut through the roll by pulling the strings in opposite directions. Place cut side up in prepared baking pan, flattening them only slightly. The unbaked cinnamon rolls should not touch each other before rising and baking. Do not pack the unbaked cinnamon rolls together.

At this point, the cinnamon rolls can be covered with plastic wrap and refrigerated overnight or frozen. Before baking, allow rolls to thaw completely and rise in a warm place if frozen. Put the frozen cinnamon rolls (container and rolls) on the counter (not in the refrigerator) overnight for 10 to 12 hours.

Cover and let rise in a warm place for approximately 45 to 60 minutes or until doubled in size (after rising, rolls should be touching each other and the sides of the pan).

Preheat oven to 350 degrees F. Bake approximately 20 to 25 minutes in a regular oven until they are a light golden brown.

In a medium bowl, combine cream cheese and butter until creamy. Add powdered sugar, vanilla extract, and lemon extract or oil until well mixed and creamy. Refrigerate frosting until ready to use and then bring to room temperature before spreading. 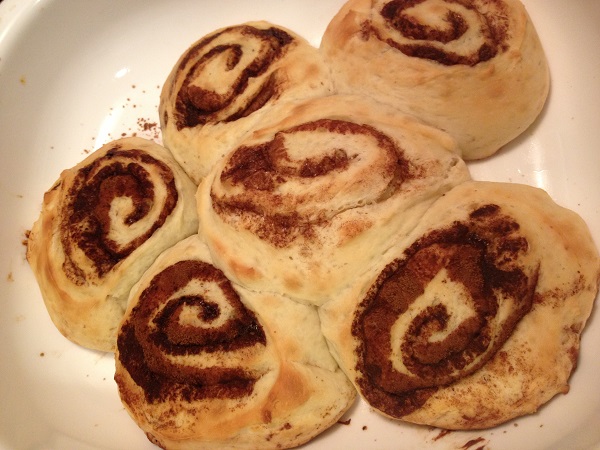 A lot of cooking is like that. You see something that looks neat and beautiful, and has a photo that makes you want to lick the page (or your screen, whichever) but when you sally forth into the kitchen, incongruous things happen and, well, that’s why there are enough cake fail photos to fill Tumblr to the brim, and a whole subset of Pinterest users who will never lift a spatula or fill a mixing bowl again. So the last sentence of the conversation started above is crucial: “Then I hope you are taking good notes, to make teaching your students easier.”

This blog is not so much a teaching endeavor as the notes I am taking while discovering new things – but I have definitely made my share of recipes from online sources and wondered when I got to a difficult bit why that wasn’t covered in the instructions!

These cinnamon rolls were not the most cooperative ever, but they were not little round bricks, and they rose very well for me. I made them in three batches – one to raise and bake immediately (I confess, it was for dessert), one to make the following morning after the yeast had had a chance to sit in the fridge and think about what it wanted to do, and one to set aside in the freezer for a later date (the recipe claimed you could put frozen rolls out to rise overnight! A blessing for stressed working moms…)

The dough was exceedingly soft, probably because my kitchen was too warm. I shall have to try this again with a cooler environment; the dough was trying to rise before it needed to! So the rolls turned out to look a little lumpy and odd, but they baked up light and fluffy, and you would definitely never know what a whopping pile of butter went into them. Only make these if you plan to run a marathon and then deep-clean your whole house followed by perhaps redoing the landscaping on your yard, or you’ll never work these puppies off. Also, make sure to sift the confectioner’s sugar for the frosting, so you don’t get the lumps that I did. They don’t stir out, I’m afraid.