Smokebelly BBQ opened about eighteen months ago. It’s on East Andrews in Atlanta’s Buckhead neighborhood, and it immediately raised eyebrows among a couple of our peers when it boasted of “Chef-Crafted Q.” It’s part of that recent wave of restaurants that are owned by a group and figured that they could let some executive chef types have some fun with barbecue in a relaxed setting, probably with bourbon. No, this is a million miles away from the sort of middle-of-nowhere, decades-old, family-run place that we enjoy the most – and come back tomorrow for a story about one of our favorites – but I’d honestly prefer a business not try to fake authenticity. If they want to do barbecue, probably with bourbon, I’m happy to enjoy their offerings on their own merits instead of judging them against old places.

Some of the early reports from Smokebelly had been discouraging. These, coupled with the expected Buckhead price tags – a pulled pork plate here costs literally twice as much as some of the older places in the suburbs – led me to pass on visiting for a good while. In early October, though, I’d exchanged emails with Jim Shahin of The Washington Post about possible barbecue restaurants to visit on his trip to Georgia. Smokebelly came up in conversation as part of this wave of “cheffy” joints in Atlanta, to use his term, along with The Smoke Ring and Twin Smokers, and I figured that I was due. Coincidentally, we received an offer to come have a meal and sample a few things from their fall menu that week.

Smokebelly is owned by Southern Hospitality, the same group that runs The Big Ketch, Southern Gentleman, and Gypsy Kitchen, a restaurant which I might possibly enjoy more than anybody else in Atlanta does. The current executive chef, Nagib Sued, came on board earlier this year. He previously worked at Big Tex Decatur and at Pure Vida, both very popular, and both very much missed. 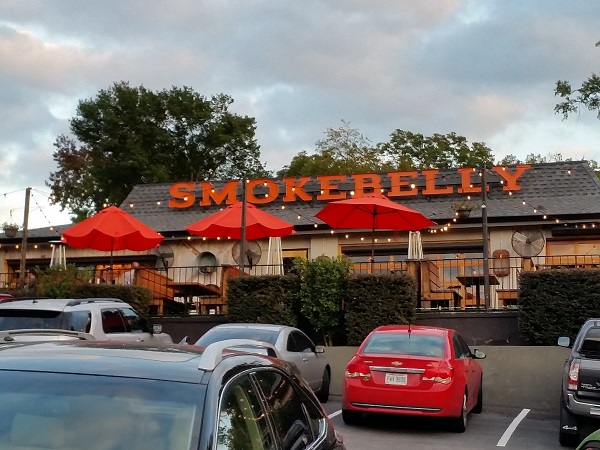 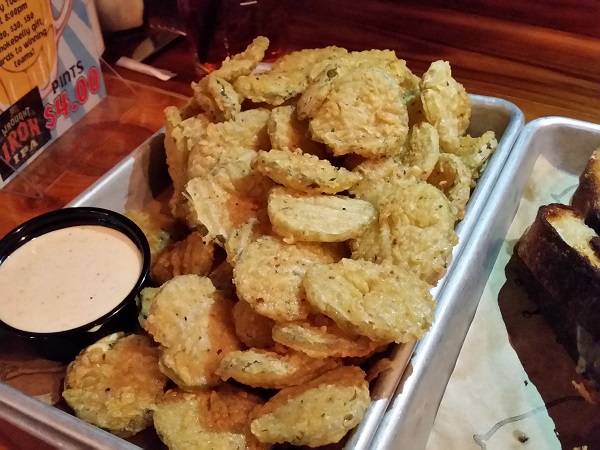 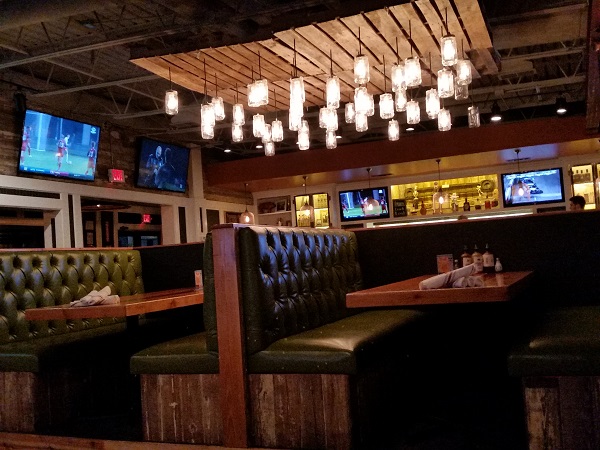 First things first, for the restaurant architecture and building history fans in our audience, despite that roof looking from the street exactly like an old Pizza Hut, this was never actually a Pizza Hut. You can tell from the side that this is a much larger building, and it’s actually large enough to discreetly house a separate-entrance speakeasy called The Blind Pig in the rear. You need a password to get in! I think that’s lovely. Anyway, the space had previously been home to Tavern 99, Aiko, La Orquidea, and many other restaurants or bars over the years, and was gutted and completely renovated by Pellicano Construction in early ’14 for Smokebelly.

For the barbecue fans in our audience, it’s not bad at all. Both our server and the assistant manager, Cole, confirmed that they have been working on constantly improving their techniques based on guest feedback. They use a Southern Pride smoker and initially prepared their meats with those pellets, which invariably have disappointing results, but they have since moved to hickory wood, and we were mostly pleased with how everything tasted. The pulled pork was especially nice. 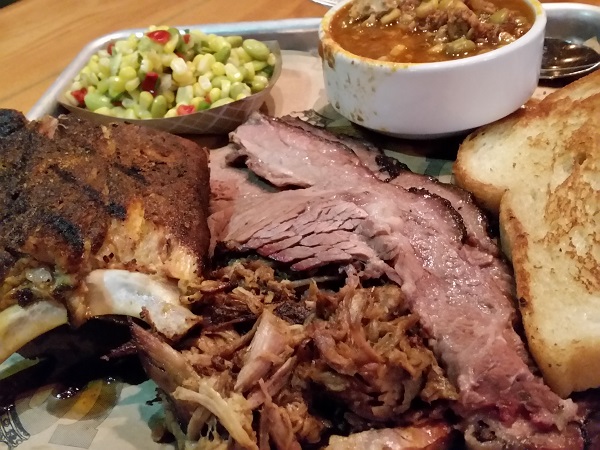 We started with two of their new “tapas” selections, the “lady killers,” which are fried pickles, and grilled cheese bites: American, pepper jack and smoked Gouda on bâtarde bread. We enjoyed both, but would recommend that the servers be a little more clear just how many pickles come with that very reasonably priced selection. That’s like an entire jar. A table for two does not need that many! The grilled cheese, however, left us wanting more. They have totally nailed this: the sandwich, sliced into strips for sharing, is gooey and soft with crispness, made just perfectly.

Marie and I shared a three-meat sampler: pulled pork, ribs, and brisket, and our sides were a corn succotash with edamame, Brunswick stew, and one of the new items, a green bean and tomato smoked feta salad. The pulled pork was absolutely on point. It is seasoned and smoked perfectly, and did not need any of the sauces, about which more in a moment, at all. The brisket is offered either chopped or sliced, moist or lean. I went with sliced and moist; it was less pink than I expected, but still very tasty. The ribs let me down, however. I’m of the school that favors a good pull to ribs; there’s a hot place in the afterlife for whatever marketing moron from Applebee’s or wherever that conned people into thinking that falling off the bone is a good thing. They were overdone, still with some flavor, but we did not finish those. The pulled pork, however, was so good that it didn’t matter. It instantly reminded me of the excellent pulled pork at Blind Pig BBQ in Jackson GA. It is a very weird coincidence that Smokebelly’s speakeasy shares a name with the restaurant in Jackson. 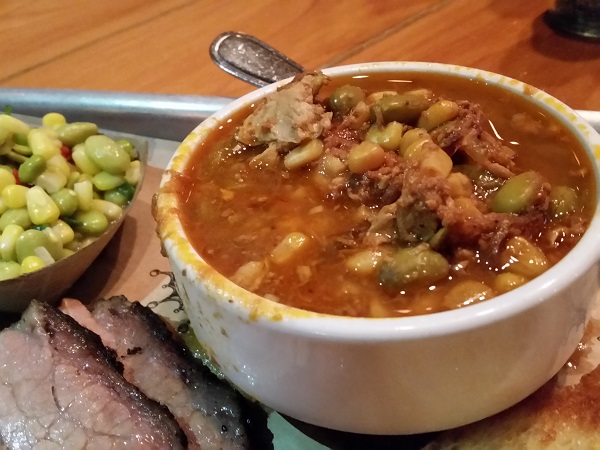 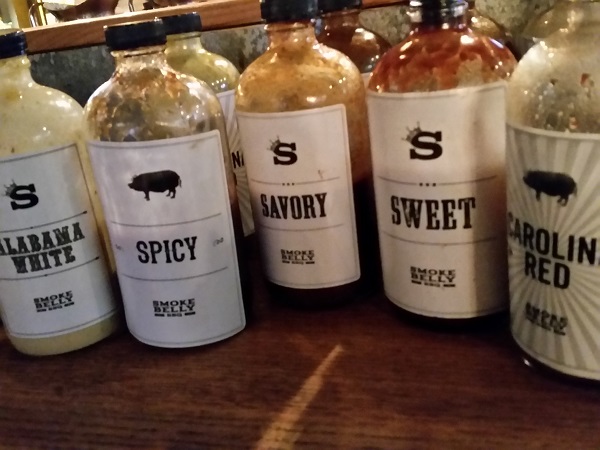 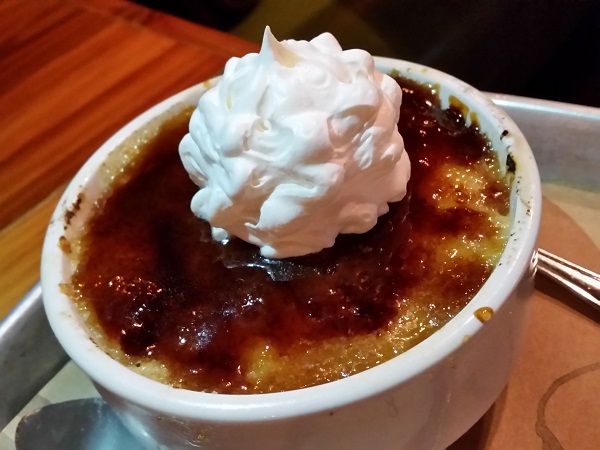 As for the sides, the succotash was a simple dish, as it should be, and really good. I also liked the green bean dish, though it probably wasn’t the sort of thing I’d order often. I actually really like that the restaurant has so many healthier, vegetarian sides available. I’m happiest with stew and slaw as my traditional sides with barbecue, but it’s nice to have some other options. As for the stew, I was quite satisfied. It’s a big portion, perhaps a little thinner than I’d prefer, but packed with meat and really flavorful. It has lima beans, which I don’t think are necessary, but the restaurant gets bonus points for not including the utterly unwelcome potatoes, which you keep seeing at newer, “cheffy” places.

One other thing you often see at “cheffy” places is a sauce for every taste, and here the sauces are offered in little apothecary bottles. The most popular three are on the tables: sweet, savory, and Carolina Gold. At least three more can be found at a sauce bar for carry-out. I liked the spicy best; it was not particularly hot, but it mixed very well with the brisket. They did not have a promising-sounding cherry cola sauce when we visited. I’d quite like to try that; I enjoy finding quirky little concoctions like that.

Speaking of quirky, we finished our meal with a really oddball dessert. Banana pudding is the traditional dessert of barbecue, but darned if we’ve ever seen it prepared crème brûlée style before. When our server ran down the dessert menu, Marie and I looked at each other, eyes meeting, confirming, and when I deferred the selection to her, I was absolutely confident that she’d pick that one.

So is Smokebelly among the ranks of Atlanta’s essential barbecue places? Not yet, though it’s probably among the upper tier of the ones that also sell bourbon, although I’ll stand behind the pulled pork and the stew; those were both really good. It’s a perfectly decent evening-out selection, with a very nice patio and a deep enough menu of nouvelle Southern dishes to please the weirdos in your group who do not enjoy barbecue. It’s fair to compare Smokebelly to its peer Twin Smokers, another concept-within-a-portfolio with an executive chef whose background is not simply tending pits with an arsenal of sauces. Twin Smokers makes better brisket, but Smokebelly makes better pulled pork, and while the prices are higher at either place than they are miles away from Atlanta, I don’t have an objection to either one.

Other blog posts about Smokebelly: