Here’s something that will (probably) never be repeated. When a media outlet or PR company invites us to sample a restaurant, I go ahead and schedule a slot for a story, just in case we want to write about it. Well, I was pretty sure that another trip to Gypsy Kitchen would warrant a story today, because Marie and I enjoy that place a great deal. I keep saying that I probably like it more than anybody else in Atlanta does. We had not been by in the last six months, when the new executive chef, Matthew Ridgway, took over, however, and I was very curious to see what changes he’d made. We only got to speak with Chef Matthew for a brief moment, but the restaurant’s chef de cuisine, Garrison Finzer, told us quite a lot about the new menu, and how the kitchen itself has had a major overhaul since the restaurant opened to – and let’s be fair – somewhat mild and mixed reviews.

But I’m getting ahead of myself. We scheduled a reservation for mid-November and I left a slot for a story right before the long tale of our last road trip will take over the blog for the next four weeks. Then our babysitter dropped the ball on us. We rely on our teenage girlchild for babysitting duties, and she was suddenly possessed of the civic spirit and gave blood that afternoon. When I picked her up at school, she was so woozy that she could barely stand, and so weak that she could not even hold her phone, which, for a teenage girl, meant this wasn’t play acting. She was useless for babysitting and so we had to reschedule, and the only available time to get a meal in before the open slot was Wednesday night. It worked out all right. I enjoyed Gypsy Kitchen quite a lot before the changeover, and I like it even better now. 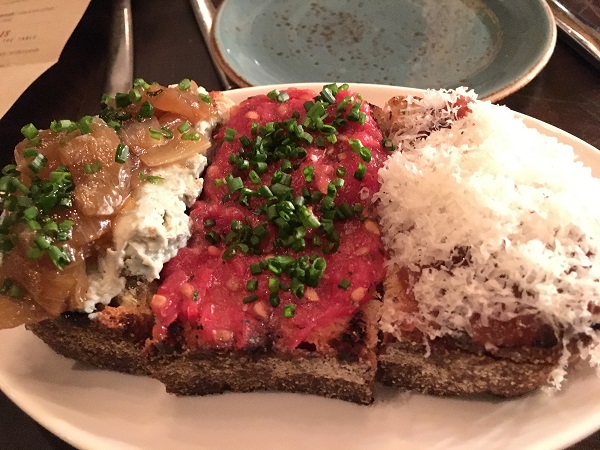 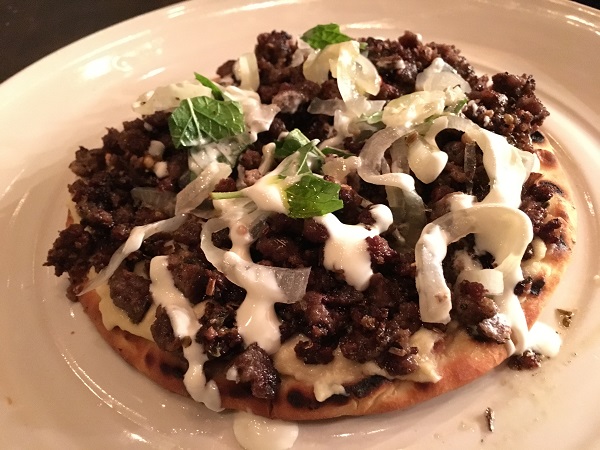 Gypsy Kitchen is located in the development that opened as “Buckhead Atlanta” and is now called “The Shops Buckhead Atlanta,” which is only slightly more stupid of a name. The restaurant’s menu emphasizes snacks and tapas with a Spanish and Moroccan influence. Most of the prices for the small plates are really quite low, which is nice, as most guests will probably order at least five or six small things to share for every two people before considering an entree. Each table gets a trio of crusty toasts with yummy spreads. Marie and I placed our first orders, and then were surprised by the first of several bonus treats to sample. Garrison gave us a lamb kefta tagine, which is a flatbread topped with a drizzle of yogurt and mint. It was really delicious!

My previous favorite thing on Gypsy Kitchen’s menu had been their octopus confit, which is perhaps sadly no longer offered because improvements in the kitchen mean that they can offer a grilled octopus dish instead. Still wanting some of that meat, I chose to order the marinated octopus salad, with fennel and oranges. Our server, Jeff, described it as being like an octopus ceviche, and it was very good. 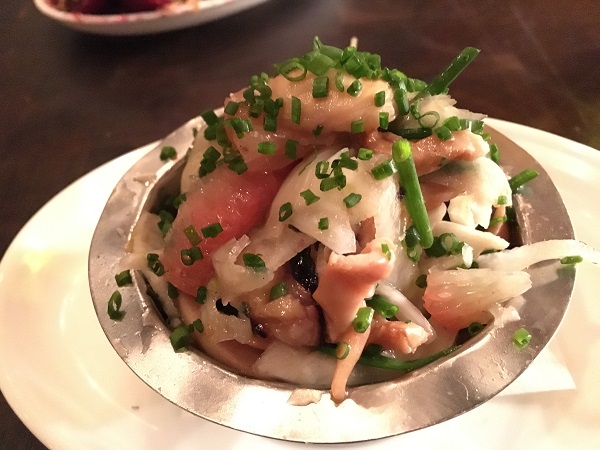 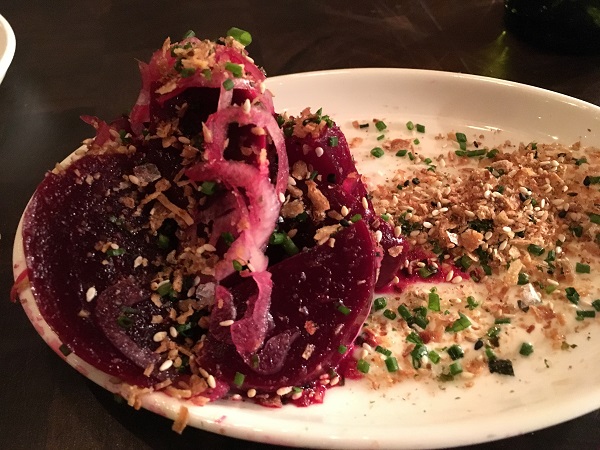 Marie was briefly let down by the pickled beets, as these have a very mild taste, and little of the vinegar flavor that she expected. However, the beets come with yogurt and shallots which proved to be a really nice accompaniment. These were very tasty after all.

More pleasant surprises were sent our way. The chickpea pancake comes with farmer’s cheese and a topping of arugula and mild peppers. I won’t say that we were wild about it, but I love chickpeas and Marie loves pancakes, so we appreciated the effort. We also sampled the foie gras escabeche, which we also enjoyed, most especially the terrific potato mousse that accompanies it. The only dish that we did not really enjoy were the ham and cauliflower croquettes, but I really did like the cauliflower and quinoa salad with paprika and almonds, which I thought was very clever. I loved how all the flavors in this dish, shown below, blended. 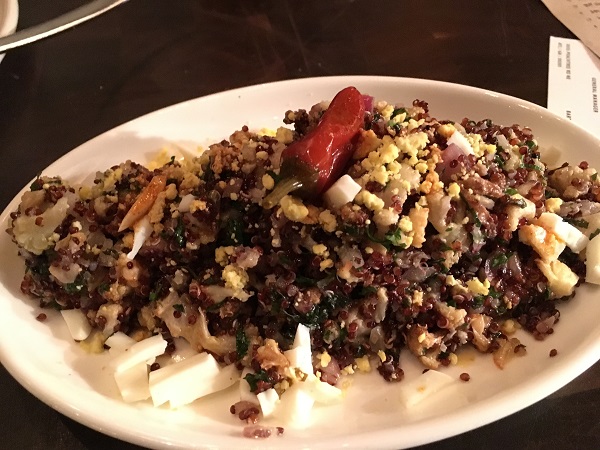 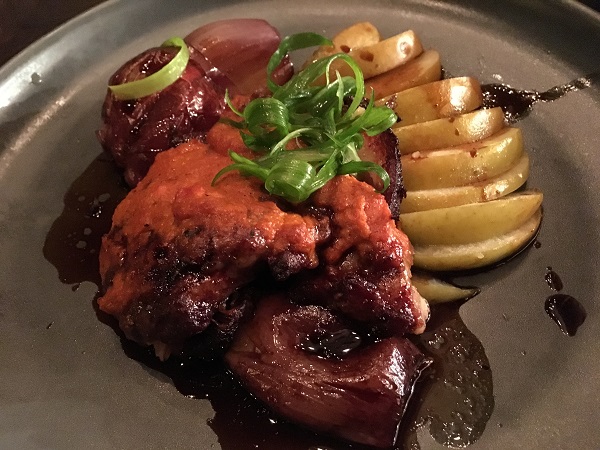 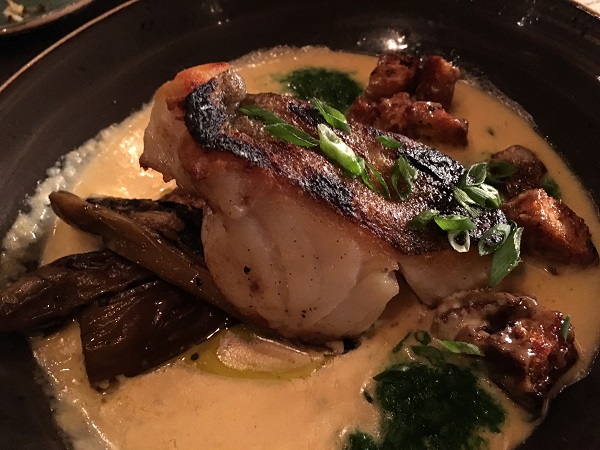 We decided on sharing the pork jowl for our entree, but they were not finished giving us more food to sample. Along with it, we received an order of the Georges Bank cod, which we had also been considering. Now, the cod is really, really good, but the pork jowl, served with a little ring of gold rush apples from Mercier Orchards, is terrific, and we highly recommend this. Garrison told us that the pork jowl is not being ordered as much as everybody who’s actually tried it believes that it should. There’s a little pushback because jowl is known to be pretty fatty. So if that is a concern, have yourself a bowl of dry cereal for breakfast and a small salad without dressing for lunch, and go to town on the pork for supper. It’s very tender and I can think of a handful of barbecue restaurants whose owners would enjoy seeing what Gypsy Kitchen accomplishes with a cut that is so rarely used.

So we left a little more than stuffed; even taking only samples, they gave us tastes of quite a lot of their food. We got a very good idea of what all the kitchen is able to do, and we enjoy places with a lot of variety and which encourage sharing and experimenting. It’s definitely a place to come in a group of four or six people, and we were glad that the restaurant was amazingly busy for a Wednesday evening.

The general manager, Bartolomeo Maldonado, was quite candid that in the restaurant’s earliest days, which I quite liked as well, Gypsy Kitchen was more uneven than it should have been, and the service was erratic. They’ve obviously outgrown those early issues to have such a packed house in the middle of the week. If you were not impressed with Gypsy Kitchen at first, they’re worth another try. Get the pork jowl. We’re serious.