Some restaurants in Atlanta just steadfastly stay off my radar, even after I’ve read about them. I think there are just so many of them that, even enjoying this hobby, I don’t quite catch everything. That seems to be what happened with Del Frisco’s Grille, which opened in Atlanta’s Buckhead neighborhood three years ago. It’s in a very neat location on Peachtree, with Atlanta’s only double-decker patio, facing Peachtree, kind of between Lenox Square and Capital Cities Plaza. Once upon a time, I worked for a company whose larger offices were in Capital Cities. Del Frisco’s might have been outside my everyday lunch budget, but I’m sure I would have enjoyed coming here with co-workers for an occasional treat.

And it’s for that crowd that Del Frisco’s has launched their “Lunch Time in No Time” promotion, to get people in and out with a really nice meal. They have a “Grab a Pair” menu for lunch, letting guests pair a soup or salad with either a personal-sized flatbread (four flavors available), half of a BBQ pork banh mi, half of a chicken avocado wrap, or two fish tacos, for about $15. Marie and I were invited to join a media tasting for the promo back in November, but were not able to make it. However, they were kind enough to invite us back for a meal a few weeks later, by which time the holiday music had, sadly, begun.

The only complaint that I had about our meal was that we had to listen to “Wonderful Christmastime.” It’s the darnedest thing, but even though I’m a huge fan of Paul McCartney and either own or have owned every one of his records (I really didn’t need to hang on to London Town), I have always loathed that song. But what’s weird is the record flopped in the US when it was released, and did not chart on the Billboard Hot 100 for even a single week. Not many musicians can claim the airplay royalty revenue stream that Paul can today for a record that nobody played or bought when it came out.

ANYWAY, so the restaurant is in the Mandarin Oriental courtyard, with valet parking. Marie and I arrived separately, and enjoyed some truly excellent guacamole while considering our options and planning our Christmas shopping. The soup of the day was a corn bisque, which is one of my favorites, and so I had that with the fish tacos. They use Mexican redfish for their tacos and they are really quite good. The tacos were kind of overshadowed by how much I liked that soup, however. I could have had a huge, deep bowl of this. The tacos also come with a small bag of tortilla chips, and I crumbled some of those to add to the soup. 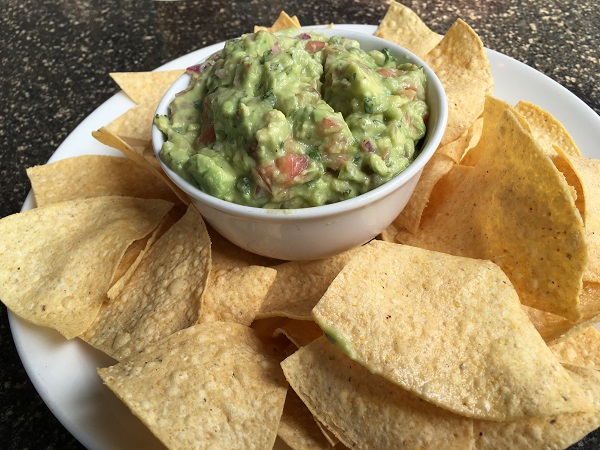 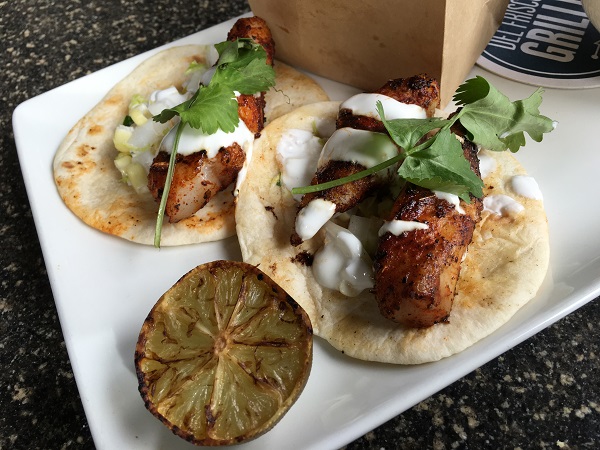 Del Frisco’s Grille is a sister restaurant to a chain called Del Frisco’s Double Eagle Steakhouse. The first of these high-end steakhouses (think $50 entrees) opened in Manhattan in 1981, and they have slowly grown to eleven additional Double Eagle locations around the country. The only two in our coverage area are in Charlotte NC and Orlando FL. The Del Frisco’s Grille is a slightly smaller concept, perhaps skewing a little younger, but emphasizing the same excellent food and superb service. The Atlanta store is one of 21 Del Frisco’s Grilles. Six are in Texas; the only other Grille in our blog’s footprint right now is in Tampa FL. One is coming to Nashville TN later this year, though. I asked Greg Fay, the manager of the Atlanta store, who he saw as peers of this chain, and he said that some of their team came to them from Darden’s Capital Grille, which has a store here in Dunwoody. 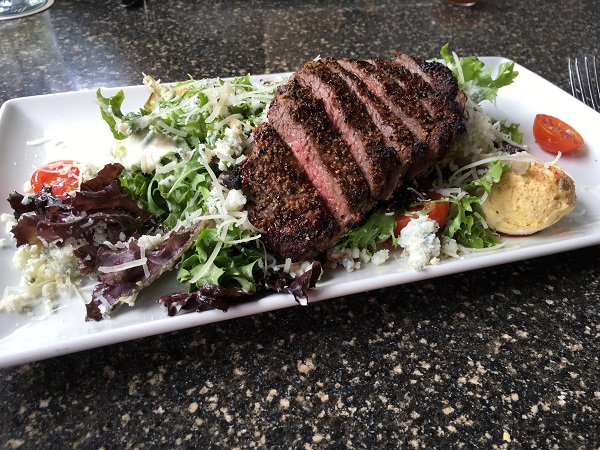 We did not know that Del Frisco’s Grille was renowned for its steaks, and so it was just coincidence and a desire for protein that led Marie to order their Steakhouse Salad, which comes with some truly fantastic, peppery broiled prime sliced steak, two deviled eggs, and avocado, with cheese and a lemon-horseradish dressing. It’s a good thing that the soup is so good; I might have got menu envy otherwise. 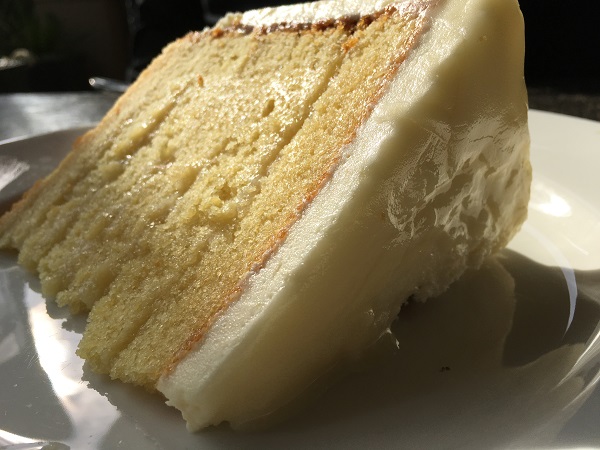 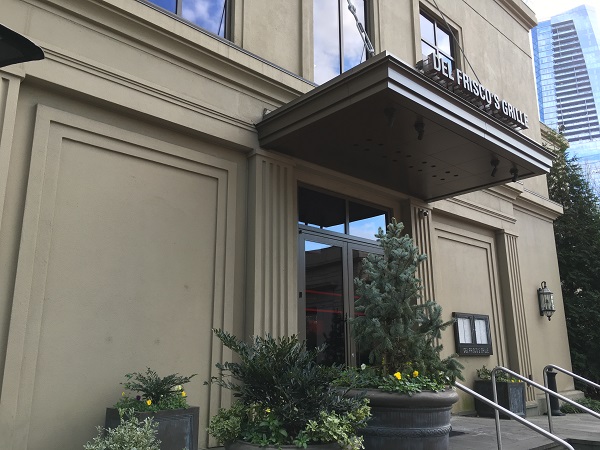 We were completely satisfied and ready to call it a day, but Greg suggested that we try a dessert. The lemon doberge cake is the restaurant’s most popular. It’s a six-layer cake with a frosting that was almost too sweet for us. The desserts here are enormous. One may be enough for three or four people to share.

We lucked into a very warm afternoon for our lunch and had a lovely time on the patio, with terrific food and service. Buckhead’s a little far from me for lunch, but we’d like to return some time for a special dinner. A small steak and a bowl of that soup and I’ll be as pleased as can be.