Last year, we had thought about a fall trip to Knoxville, but it didn’t happen for one reason or ten. Still, I’d put together a small to-do list since it looked as though we’d be visiting the town of Loudon on that trip, and a small canopied drive-in stood out as a must. Well, it’s either a drive-in or a drive-inn; even the building’s own signage is confused on that point. Carl Whited, who passed away in 2012, opened this place in April of 1960. We’re always happy to visit a 56 year-old restaurant.

The kids were with us on this trip. They each had burgers and shared a tray of tater tots. Marie had a fried chicken sandwich, and I followed a tip that I read in a review online somewhere or other and had the chicken salad. Our daughter was less than thrilled, saying that it was just an okay fast food burger, but the chicken salad was really good. The restaurant likes to brag about this and their pimento cheese. 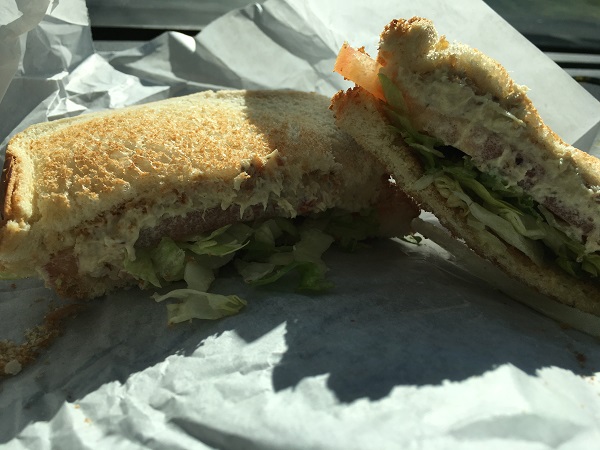 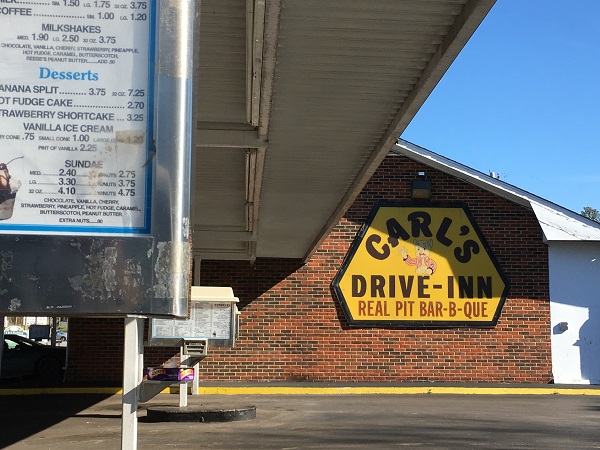 Unfortunately, one part of the signage is no longer true. With costs rising, Carl’s stopped smoking its own barbecue some years previously. Around the back of the building, you can still see the three old fireplaces that they once used, but they are dormant these days. Another, somewhat more welcome change is apparent if you step inside the small lobby and look at a menu from 1972. Back then, the carhops would bring you a pack of cigarettes for 45 cents! 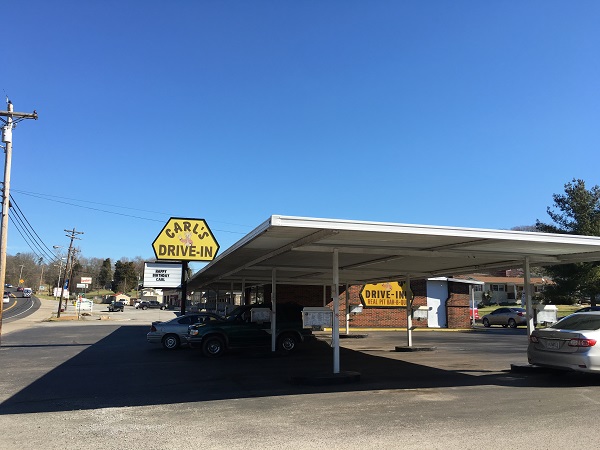 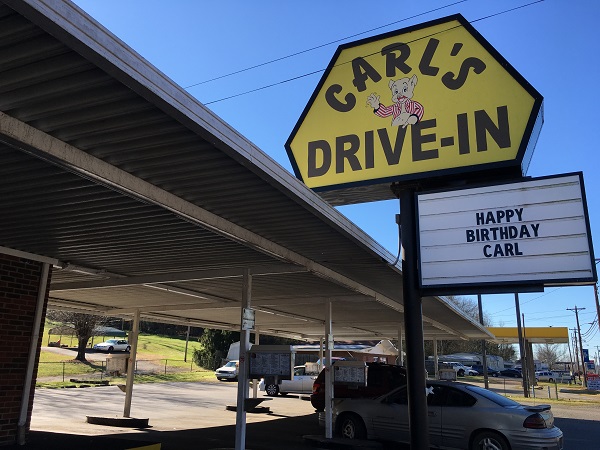 The carhops here are completely wonderful and sweet, and even if the food is really not destination-driving, it’s still better than the fast food options around. Finish up with a milkshake and you’ve got a fine little lunch, honestly.

We arrived a little later than planned, as we got a late start and also realized after we left that Marie’s car was overdue for an oil change, so we stopped in Chattanooga for one. At least gasoline was nice and cheap – $1.47 in Tennessee compared to $1.68 at home – but we made ourselves later still when I went the wrong way leaving Carl’s, and drove into the small and lovely town of Loudon instead of heading north toward Lenoir City. But this worked out for the best, because we had planned to make a final stop of the day, eight-ish hours later, at Tic Toc Ice Cream Parlor in Loudon, and we realized that the business was closed for the winter! It should be open by the time this story posts, but I sure am glad that we stumbled on this fact when we did, rather than detouring here on the way back!