(Marie’s latest report from the kitchen wasn’t a complete success, but we know how to adapt for the next time…)

Every catalog we get from Penzeys Spices is mined for ideas. This time it was the Fattoush recipe that we selected. The girlchild, who is not a terribly big fan of salads despite her numerous short-lived attempts at becoming vegetarian, was relieved to know that we were scheduling this particular salad for a day when she had other plans. She only likes iceberg lettuce, and I don’t like buying that stuff because a) it tastes like water and b) it goes limp almost immediately after opening the package. Romaine isn’t much better because the ribs go brown, but at least you can purchase it in bunches if the prechopped bags look iffy. First World problems, right? My son does not eat any kind of salad except pasta (he gets away with it because he has points for liking broccoli and pickled beets) so this was just for the two adults. It’s a quite substantial salad, and could easily feed four light appetites or three medium.

Anyway, once the negotiations about who would be required to eat the actual meal were out of the way, things went smoothly. This salad does have a cooked component which I happily threw out the window. I had no stale/leftover flatbread in the house to reuse as toast, and wasn’t going to make some by buying it new for this recipe. I bought pita chips (which is suggested as an alternate by the recipe), and they worked very well.

This is a super easy recipe. Really all you have to do is chop the veggies, whip up a dressing, and toss. I had a bit of a challenge with the dressing because it turned out way too lemony; I recommend putting in only a small part of the lemon juice called for, tasting it, and then adding more if you feel like it. However, the girlchild had mentioned earlier in the week that the lemons I’d bought were kind of strong. Still not a bad idea to check, because this was really good with that one caveat. 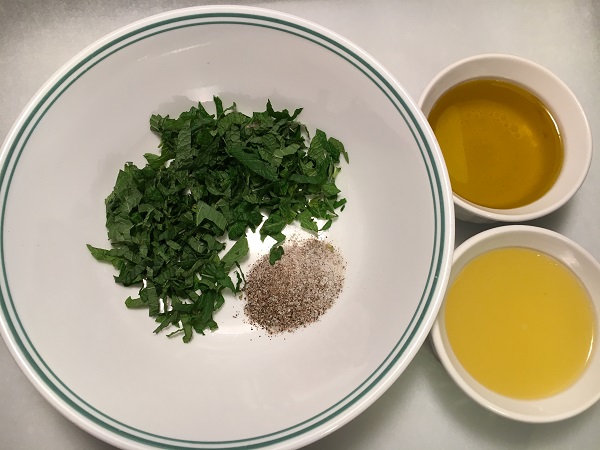 The bread
Either a few cups of broken pita chips, or
1 loaf flatbread cut or torn into about 4 cups of 1-inch pieces, drizzled with olive oil and toasted in a preheated 350-degree oven for 5 minutes or until desired level of browning has occurred, and allowed to cool.

On an utterly unrelated side note, I’m a Stargate fan, and it amuses me whenever I see arugula because of the Paradise Lost episode in which the main character is stranded on a planet where one of the few available food sources is a plant that causes hallucinations and paranoia, and is described as tasting like arugula. I’m afraid I amused myself while making dinner by giggling internally and thinking up bad jokes about hallucinations. I did not inflict them on my family, which probably added to their enjoyment of the evening. This salad will not make you see anything untoward, however, and is worth trying out – with less lemon than called for.

One thought on “Fattoush with Too Much Lemon!”