Just about every photograph on our blog makes me cringe, but the ones that I presented with our original story about Piggie Park, five years ago, are a real sore spot with me. Look! Four white styrofoam cups! What astonishing composition skills I have.

Reading over old stories, it also doesn’t help that I’ve changed my terminology a little bit from the way I used to describe things in our first year of writing. In that original story, I called the sauce at Piggie Park the “traditionally dark ketchup and vinegar combo of middle Georgia.” There is actually some truth to that, although what I’d now call “middle Georgia” is truly the Macon metro area and points south, where the sauce is totally different, as related in the previous chapters. However, if you meander west from Macon, you’ll indeed start to find a thicker sauce served after the meat is smoked. That’s what I found here and at the next two stops on my drive. 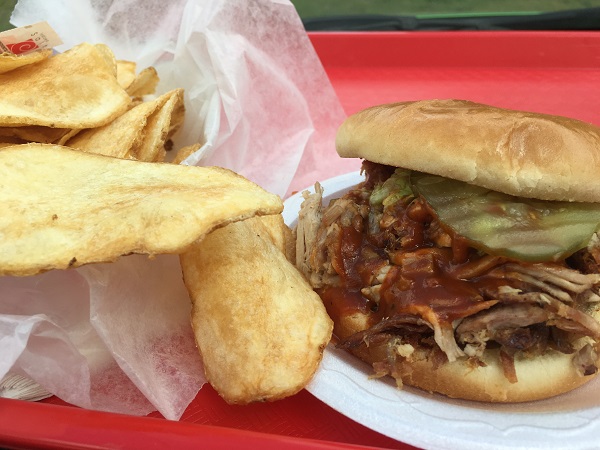 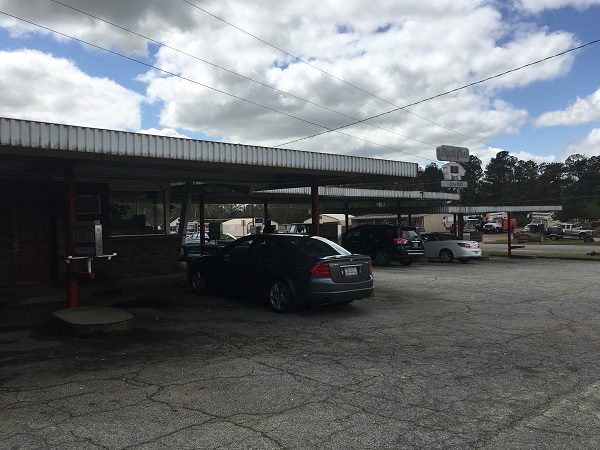 Anyway, Piggie Park wasn’t on the agenda for a revisit, because Thomaston is a pretty long detour from I-75, but as I started looking over the possible ways to get from Macon across to I-85, I saw that returning to Piggie Park would make some sense. If nothing else, I could try to take a couple of better pictures and have another taste of their quite good barbecue.

It’s very difficult to take pictures of an old canopied drive-in and show off what about them is so appealing, and I’ve found that the best way for me to present them is to take dozens and print three or four instead of just one. That’s another big change from the early days of our blog. We really hemmed ourselves in with “700 words and two photos” and it resulted in some lousy posts. 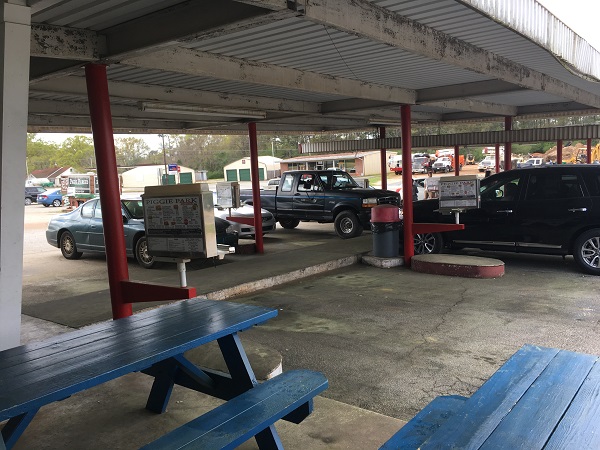 The Piggie Park opened in 1950 and it is still incredibly popular. I got the last available space, along the side of the building and not underneath the canopy. My carhop said that they still serve a lot of barbecue, but their burgers are also really good. The barbecue is really tender and has a great flavor to it. Is the sauce necessary? Probably not, but, since I was driving around in a sauce region that’s still largely undocumented, I decided not to ask for my meat dry at any of the five places I visited. Of course, I knew from our first stop here that Piggie Park serves with the sauce ladled on, but I also didn’t want to risk a spilling accident in my car by dipping, either.

I was also very pleased to see so many teenagers hanging out here on a Saturday afternoon! Classic drive-ins like this one have a reputation of being frequented by old fogies and nostalgists, but there were two large groups of teens hopping from car to car just like their grandparents would have done sixty years ago. I didn’t mind the long wait for my food at all. I’d rather a great old place like this have to deal with a parking problem and a backed-up kitchen than see it struggle for lack of business on a Saturday. Besides, I had a good book with me and a lot of reading to do. And as for the styrofoam cup, I had them fill mine with a hand-mixed cherry Coke, but have at least learned not to bother making such things the centerpiece of a photograph.