A couple of months ago, Drew from Man Up Texas BBQ tweeted that he’d driven 45 minutes for breakfast at Milo’s, a Birmingham-area fast food chain, and asked to be told if there was a better chicken biscuit anywhere. I immediately complied. Atlanta’s Martin’s chain has the best chicken biscuits of any chain in the south.

Around the same time, I was planning for our “Farewell Atlanta” week at the blog and wanted to visit four Atlanta restaurants that I enjoy that don’t get very much hobbyist press at all, the sort of fun, ultra-regional places that really only Atlantans know about. I wanted to write about the sort of places that, if Marie and I had been based in some other city all this time, we’d come to Atlanta on our road trips to sample alongside its barbecue. Martin’s was an obvious choice. The chain has fifteen locations, but not too many of them get a mention at anybody’s blog. Martin’s is a lot like Milo’s in that regard. If you live in the suburbs and you know Martin’s, then you know it incredibly well, and you probably plan your commute to give yourself time for a chicken biscuit every day. You may need a lot of time. I’ve seen these places absolutely packed in the mornings, and long, long lines for the drive-thru. 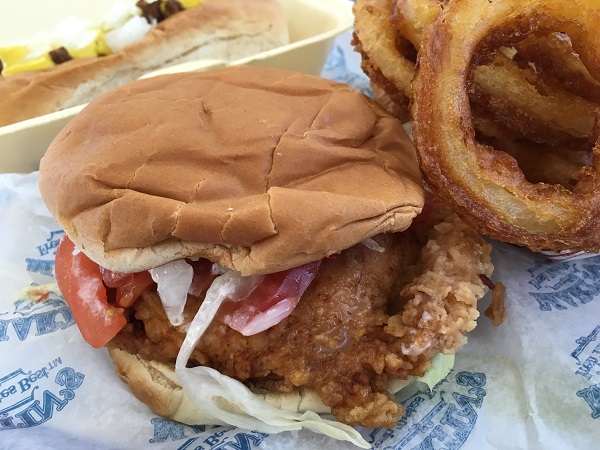 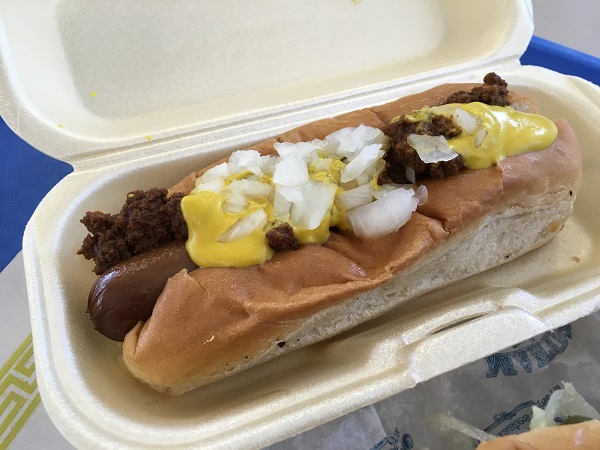 After I started working from home this year, I occasionally started going by the Martin’s nearest me – on US-41 in Kennesaw, just north of Barrett Parkway – for an early lunch. The breakfast crowd was never in any hurry to finish. The restaurant was never completely full, but usually about two-thirds of the tables were hosting small groups of older guests finishing up long, long conversations with lots of coffee. Now, having sung the praises of Martin’s biscuits, I’ll switch gears and tell you about their real treat: the chicken filet sandwich. As good as that chicken is with a biscuit, it’s even better on a bun with lettuce, tomato, and pickles. I would argue that there is no better chicken sandwich on a fast food menu.

The onion rings are fantastic, with a very firm and crisp batter, and if you really want to indulge, get a chili dog. This isn’t something I normally do, but I spent the extra buck eighty on this trip so I could have a picture of it for you good people. Our friend Andy, who writes Burgers, Barbecue and Everything Else, is a big fan of a style of chili dog around Atlanta called a Yellow Jacket. (Check out his chili dog page.) Decades ago, the Yellow Jacket Drive-In was the principal challenger to the Varsity’s claim to serving the dogs that Georgia Tech students loved most. Both restaurants popularized dogs with a dry, mildly-spiced beef chili, and they sparked imitators all over the metro area. One of them, brazenly, was called the Blue Jacket.

Eventually, time caught up with the Yellow Jacket and it closed, but Martin’s, which for more than twenty years was just a single drive-in over in Austell, had already nailed down their version of a yellow jacket. Fred’s in Lithia Springs also serves them; Olympic Flame claims to be the official torch-bearer (ha!), using the original yellow jacket recipe with permission, and there are probably others here and there around the city. Martin’s has been doing their take on on the yellow jacket for fifty years, easily. If you’d like to sample this little bit of Atlanta’s food history, then since Martin’s has fifteen stores, they’re probably the easiest place in the area to visit. 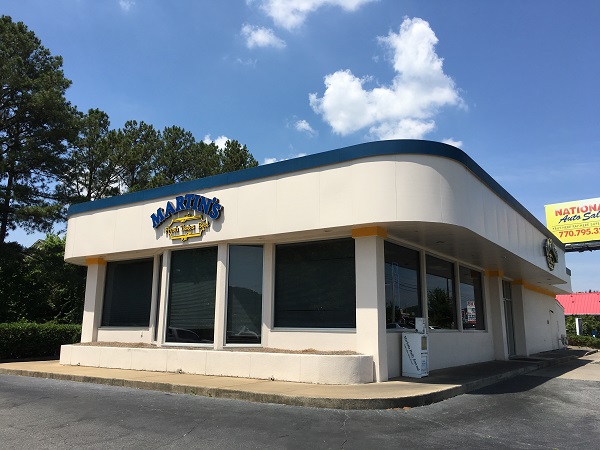 Honestly, their burgers are just fast food-okay, and their pork tenderloin is the sort of disappointing frozen variety that I am sure the good people of Indiana and Iowa would find very disappointing, but the biscuits, chicken sandwiches, and onion rings are all way, way above average, plus this is a sixty year-old Atlanta-area success story that most people who never venture out from inside the perimeter have never experienced. If you have a blog, you should check out Martin’s and spread the word!