After our fun visit to a German restaurant in Knoxville earlier this year, I hoped we could visit one in Memphis. Would you believe there’s one just down the street from where Marie’s sister works?

None of us in this writing-about-food hobby are completely able to absorb and retain the names and details of every restaurant that we’ve read about. I can’t tell you how many times I’ve seen one of our blogger buddies do a story about a meal that starts “I’d never heard of this restaurant before…” and I’ve said aloud “Yes, you bloody did, you asked me about it after my story went up three years ago!”

But I’m every bit as guilty. My go-to time capsule for the Bluff City is Craig David Meek’s Memphis Que, which spent 2011-2014 documenting barbecue and economics, brilliantly. One of his last stories before retiring from blogging was about this restaurant, then about to open, and provides some interesting background about the owners and their ambitions. I had read that, two years and change ago, and completely forgot that I did.

As we arrived in Memphis, we drove straight to the fabulous Rainbow Lake Playground, which we visited for the first time on our last trip. Because our son, who had then only just turned five, was still working on understanding spatial distances and the time it takes to drive them, he was a little heartbroken a few days after we got back to Georgia and we weren’t able to take him back to that playground instead of either of the two by our old house. So he was very glad to return at last and kept me very, very busy running around and playing with him while Marie napped in the car. Then we spent a little more time in Memphis’s completely amazing central library and drove to the Overton Square neighborhood to meet Marie’s sister Nikka. She was working two shifts on this Thursday but had a two hour break between them for an early dinner and a candy-shopping expedition.

Schweinehaus is a fun beer hall that, this being Memphis and all, emphasizes its smoked meat. This results in a very natural fusion restaurant rather than exclusively traditional German dishes. We could have gone with the region’s standard pulled pork, beans, and mustard slaw that they offer here and just written about this place from the perspective of sampling some more of Memphis’s barbecue, but we had a couple of places on the agenda for the next day to fulfill that need. Marie and I had looked over the menu before we left and decided we’d share the Wurst platter.

The only question after that was which sausages to pick. After a little debate, we settled on bratwurst, kielbasa, lamb, and venison. These were served with potato pancakes, red cabbage, and kraut. Marie was not all that taken with the venison, but really enjoyed all the others. Our son grumbled through a selection of sides – at least he liked the mashed potatoes – and enjoyed the slices of bratwurst we shared with him. 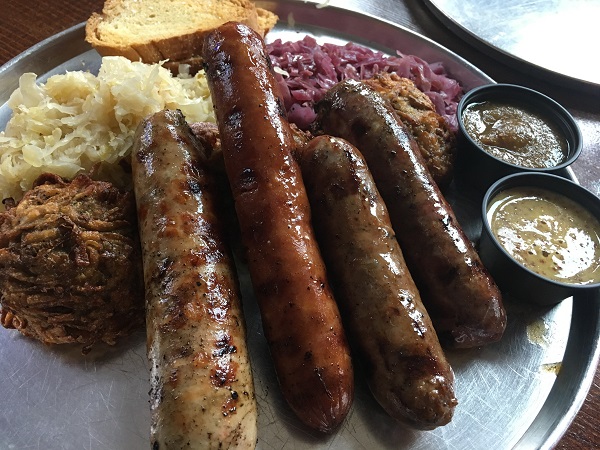 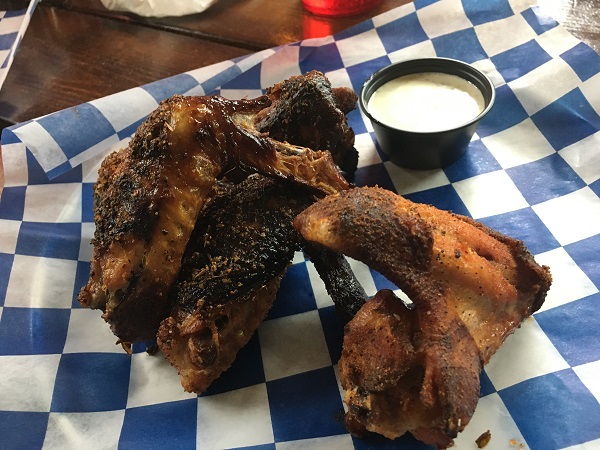 Nikka had heard great things about the smoked wings with a dry barbecue rub that I believe is similar to what you’d get on the ribs at Leonard’s. She was very pleased with them.

While Schweinehaus is definitely more of a fusion place than a standard German restaurant, much to the dismay of one of Meek’s whiny commenters who got the vapors because the owners once misspelled “biergarten” in a press release, we really enjoyed the food. The service was a little inattentive – we arrived before they got really busy, too – but not bad enough to grumble. I had a look at the bar and they had a nice mix of German and local craft beers on draft. It seems to be a good place to meet friends for an afternoon of beer and barbecue.

After dinner, we walked across the street to a really terrific candy chop called Sweet Noshings. They’ve got many of the nostalgia-label sweets and sodas that you’d expect, but the selections that they make in house are really amazing. Marie’s got a much sweeter tooth than I have, so I just asked her to add a peanut butter malt ball to a bag of chocolates that she was assembling. I had that in the hotel the following night and the next time we go to Memphis, I may have to pack some cheese sandwiches and skip a couple of restaurants because I might spend my eating-out money on an eight pound box of those instead.