A few months ago, when we learned that Marie was pregnant, we knew that our long road trips would have to be curtailed at some point. Sitting in a car for hours and hours and then taking a long hike through some state park’s nature trail is a bit much in the third trimester, even for somebody as enthusiastic as Marie. I suggested that we take the spring off from road tripping, but before we do that, we’d have two last long drives. We’d do one day this month, and then go back to Saint Simons Island to visit her parents in March before raising the drawbridge. I started charting out our February trip before Christmas, because I’m impatient that way. What I came up with was pretty eyebrow-raising: I estimated that the 613 mile trip would take us just over fourteen hours and see us stopping by eight different restaurants in three states. So for the next couple of weeks, we’ll be recounting those stops.

At least we were by ourselves. We had the whole day to just be together, talk, hold hands, and enjoy some occasional “companionable silence,” as P.D. James terms it, with the rowdy children spending the day with my mother. The kids missed some very good meals and one or two that did not completely thrill me, but even the least of the stops was interesting and curious, and I’m pretty sure that we’ll be returning to one place in South Carolina many more times in the years to come, especially if we can make a move to Asheville in a couple of years and find this place about a seven-minute detour on a trip from there back to the Georgia coast to see her family.

First up was one of the remaining destinations on our list of Georgia restaurants reviewed on Roadfood.com. We had thirteen to go for a full set, and one of these is a breakfast joint, Mamie’s Kitchen in the suburban town of Conyers. I always hate driving out I-20 this way. I used to know this guy in high school who lived off Evans Mill Road and pretended he was the nephew of Marvel Comics editor-in-chief Jim Shooter in order to con gullible chumps like us into thinking we could start a comic book company. He called me on the phone once, irate that “some Christians” were misunderstanding the lyric of a song by a popular eighties group called Mr. Mister, and making it all about God and stuff. Turns out he was the one who misunderstood them, and that the line really is not “Kyrie lays upon the roads that I must travel.” I mention this because, for the umpteenth damn time driving east on I-20, I got that stupid song stuck in my head. This time it was particularly awful and all the time we were looking for Mamie’s Kitchen, I was singing that blasted chorus to myself. 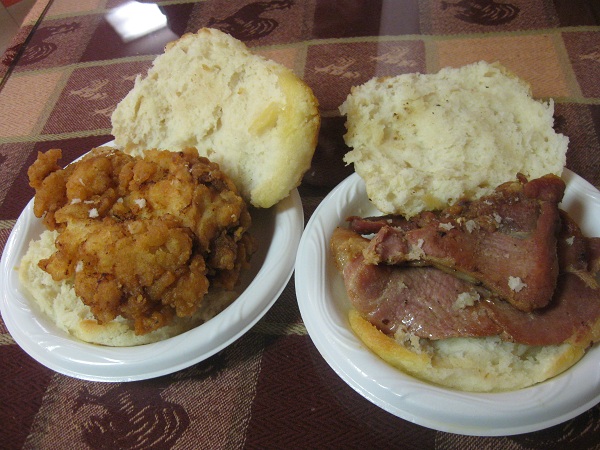 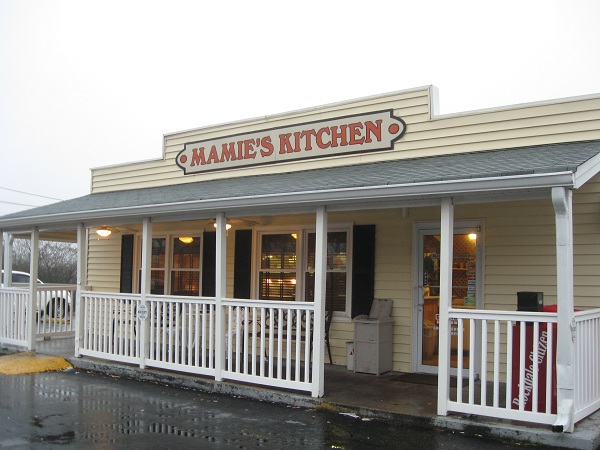 Mamie’s Kitchen has been around for decades, selling really inexpensive breakfasts, and it seems that most of them go out the drive-through window. They do offer a breakfast buffet, but it seems that many people just enjoy stopping in for a biscuit or two and relaxing in what must surely be one of the most comfortable and relaxed little getaways that I have seen recently. Here, a small early morning meal in the company of friends is just a perfect way to get the day started.

We had the good fortune to visit at the same time as a table of regulars were enjoying what appeared to be a usual Saturday morning ritual for them. Four men, one about our age and the others a good deal older, were enjoying their umpeenth cups of coffee and talking in happy voices about anything and everything. On a first-name basis with all the ladies who work there, they playfully bantered back and forth about refills and harmless flirtation and foolishness. Maybe I am an eavesdropping jerk, but I just love people-watching. It does me good to know that I’m in the company of happy people.

Marie and I each had a biscuit, hers with chicken and mine with deliciously salty country ham. The biscuits were warm from the oven and so delicately fresh that they’d have liked to disintegrate with a touch. I would have gladly had another, but we really couldn’t linger and really should not have indulged in more, for we had a second breakfast awaiting us two and a half hours down the road. So we left the table to its conversation about the Holy Land and whether one of them was going to whup their waitress or whether she would be whupping him first – my odds were on that outcome – and made our way. The sun was even good enough to rise while we were inside, allowing me to photograph the building. The morning was off to a remarkably good start.