So this past weekend, Marie and I went out on what will most likely be the last big road trip that we will take until the baby is born in May. We started with a small breakfast at Mamie’s Kitchen in Conyers, and then drove east out I-20 towards Augusta.

The journey took us through Taliaferro County, one of Georgia’s smallest, and the least populated. It is notable, in one circuit where I travel, as being the most difficult county in Georgia to obtain a hit on Where’s George, the currency tracking project that I enjoy playing. Even though there is never a guarantee or even a serious hope that spending money at a specific point will get you a hit from it, I could not resist pulling off the interstate at exit 148 and buying a little gas at the only filling station there – for a criminal $3.30 a gallon! – in the hopes that somebody local will hit one of my bills. I have hits from 61 of Georgia’s 159 counties, and I sure do hope that Taliaferro will be the 62nd. If not, I might have to go back out this way and get lunch at Heavy’s BBQ in Crawfordville one day. That’s where some scenes in the film Sweet Home Alabama were shot.

About three-quarters of an hour later, we were on the outskirts of Augusta, the state’s second largest city and home to the Greenjackets minor league baseball team. Oh, and the Masters, I suppose. Our destination was Sconyers, an old and very popular destination restaurant that, agreeably, opens at 10 am, allowing us to plan a de facto second breakfast. I’d heard an awful lot of tourist scuttlebutt about this place over the years, including its presence on a People magazine list of the nation’s ten best barbecue restaurants, and wondered whether it could live up to the hype. Part of it really did, I’m glad to say. 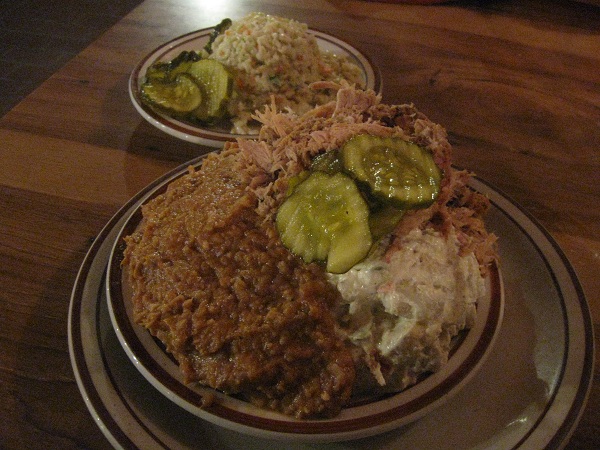 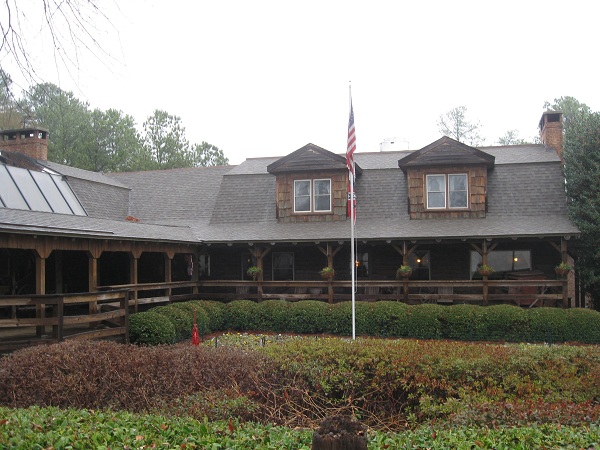 When Claude and Adeline Sconyers opened in 1956, it was in a little storefront with one of those cute wooden signs with Coca-Cola logos. Their son, Larry, has run the place since the late 1970s. He moved the restaurant into its current digs. It’s now a huge house with a gigantic gravel parking lot. Inside, the decor is understated and classic western, like an old log cabin. Or, if you prefer, like one of those pancake restaurants in the Smokey Mountains that look like they want to make you think that you’re in a log cabin. Attempting to enhance the western feel and failing quite spectacularly, the wait staff and servers all wear quite grotesque costumes. They’re these hideous blue and white faux-milkmaid things that would look tragic in a third-rate rep company’s production of Heidi. Never have I had such excellent and professional service from somebody dressed so garishly.

For our second breakfast of the day, we elected to split a small plate of chopped pork with hash and potato salad, along with an extra side of cole slaw. Strangely, the restaurant just crams all three of the different foods onto a single, small plate, serving that atop a slightly larger plate to catch your crumbs and spills. Trying to cut calories, I actually removed potato salad from my diet almost two years ago, but I succumb every so often for a few bites. I had heard, correctly, that Sconyers has excellent potato salad and so the couple of bites that I had were well spent.

The pork, however, was really quite disappointing, just sort of limp and moist with no smoky flavor at all, but it is served with a really excellent sauce that goes very well with it, and turns an ordinary meat into something quite memorable. The sauce is available in three degrees of heat, and it is a mixture of vinegar and mustard with a little tomato and a secret blend of spices that Mr. Sconyers still adds daily. This kind of sauce is absolutely not to Marie’s liking, and I suggested she might want to pass on it, but I thought it was super.

The cole slaw was also really something – a light mayo-based blend served with sweet pickles – but the standout was the hash. Now, several of my favorite places in northeast Georgia serve up a really thick, not-Brunswick stew that is a lot like Carolina hash, but only a few, like the dearly missed Carrithers in Athens, actually called it hash. Sconyers serves the real deal, a thick blend of leftover pork and sauce over rice and it is just amazing. Even if you’re just passing through with lunch or dinner plans somewhere else, you need to stop in here for a four buck bowl of hash and rice. There’s a reason that Jimmy Carter had Sconyers cater a big White House event; this hash is something special.

This is the sort of restaurant where you can understand why locals have started grumbling that it isn’t as good as it used to be. People turn on success and even in cities like Augusta, which seems to have an aging population and not one so interested in a vibrant foodie community, people do tend to look for the next new thing. Is it possible for a restaurant with a parking lot the size of a small stadium to maintain quality for better than fifty years? Well, I don’t know whether it is as good as it used to be, but it’s still okay at some things and downright excellent in others. This is definitely worth a visit, I’d say. Just get ready to giggle at those silly costumes.

Other blog posts about Sconyers: