Man, I’m glad I found this place. I don’t know where else I was supposed to eat.

Well, since the last time I actually composed an entry here, we had our baby! He is a precious little boy that weighed six pounds and twelve ounces at birth, and evidently had such a good time at the showers thrown for him and Marie that he decided to come two weeks early, just a couple of days after all our out-of-town guests left. This sort of left me unprepared for going to get anything to eat at the hospital that we used in the Cherokee County town of Canton other than Mo Ribs. A couple of weeks previously, we had driven past this place on our way back from Chatsworth and I said then that I would have to stop by while we were in the hospital.

The quick succession of events meant that I ended up having wretched hospital cafeteria food for breakfast and for lunch, and the baby came at 3 pm. Four hours later, I drove back to Marietta to pick up his older brother and sister to go meet him and, first, get some food. We went by Mo Ribs, but they’re only open for lunch on Tuesdays. My daughter remembered enjoying Jiffy Freeze, which isn’t far, but it turns out they’re not open at all on Tuesdays. So, not knowing where else to try, we settled, I’m sorry to say, on Taco Bell, which my children, being middle schoolers and thus the target audience for that “food,” find agreeable. But this, this was the worst Taco Bell in the state. Even the kids thought it was horrible. This, three awful meals in one day, was no way to celebrate this baby’s birth. Heck, I remember that day in 1997 when my older son was born, I got a package of New Avengers episodes in the mail. Now that’s how you have a good birthday.

So the next morning, I made darn sure I got back over to Mo Ribs for something good to eat. Darned if I was going to settle for a mediocre lunch after the day before. 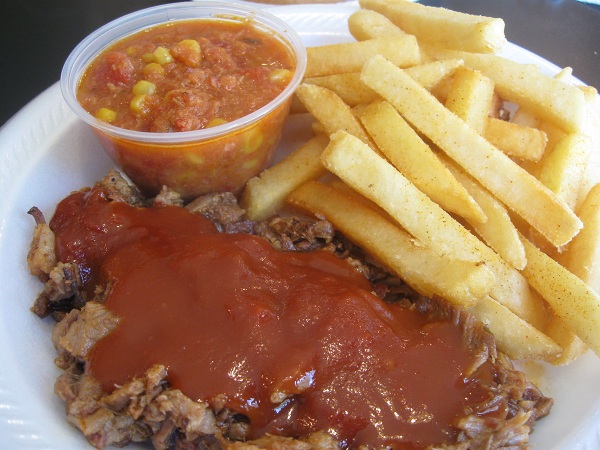 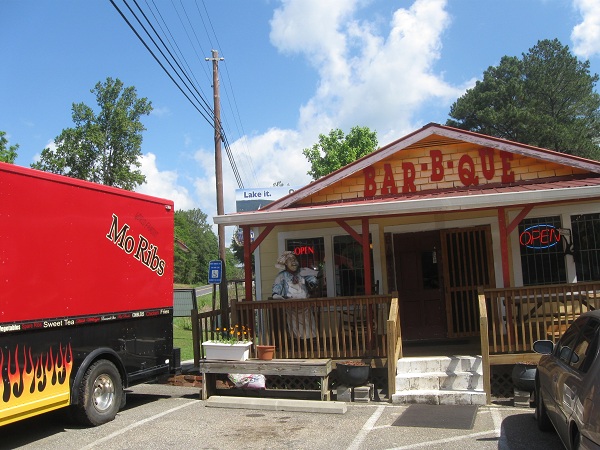 I was the only person here when I stopped by at eleven on a Wednesday morning, but don’t take that to mean this place shouldn’t be hopping. This is very good chopped pork, with a really awesome smoky flavor. I neglected to ask for my meal dry, and it came already sauced with a thick layer of deep smoky red sitting atop the meat. My palate was certainly starving for something great, particularly in light of all that garbage that I ate the day before, and so I might not be very objective when I say that this really hit the spot.

The fries didn’t strike me as being anything unusual, but the stew, soupy and very heavy with tomatoes, was quite nice. But oh, my. This sweet tea was so darn good. At its core, this is a pretty good meal, but the tea genuinely elevates it, in a way that the tea at the late, lamented Carrithers of Athens did. My!

The location really works against them, I think. I like the building, tucked into a fork in the road, but there doesn’t seem to be much parking, and it’s a pretty fair ways off the interstate. Nevertheless, it’s definitely a good destination for people in the area or students at Reinhardt University, and travelers taking a barbecue tour up I-575 should certainly add this to their list of stops.