So the day after our new baby boy was born, I wasn’t going to rest on my laurels and have any more lousy hospital or chain food like I did on the day he arrived. I still had two other kids to take care of while Marie recuperated in the hospital, and so I came back to Marietta to give them some more attention and some supper.

My daughter chose to go out with friends, so my older son and I went over to Marietta Diner for the first time in ages. I have mentioned this place a couple of times before; this is the flagship location for a group that runs some of Cobb County’s most well-known restaurants. We’ve covered their sister locations Marietta Fish Market and Cherokee Cattle Company in this blog before. While each of the other stores pick one style of cuisine and does an efficient, if sometimes larger-than-sense job of it, the Marietta Diner elects to do everything, and do it pretty well.

One thing that potential guests need to know is that there is always a crowd here. I’ve never had to wait for more than a few minutes, and occasionally, like last Wednesday, not at all, but I’ve never seen the place without plenty of people and an almost full lot. That’s any hour of the day. The Atlanta area is home to quite a few neon-and-chrome diners, but this place is easily the most popular and beloved of them all. Somehow, the army of staffers employed here manage to provide quite excellent hands-on attention to detail, fixing errors instantly and providing really prompt service while being pulled in many directions. The difference in customer service here and at any equally busy place – say, last month’s trip to La Fonda Latina – is like night and day. 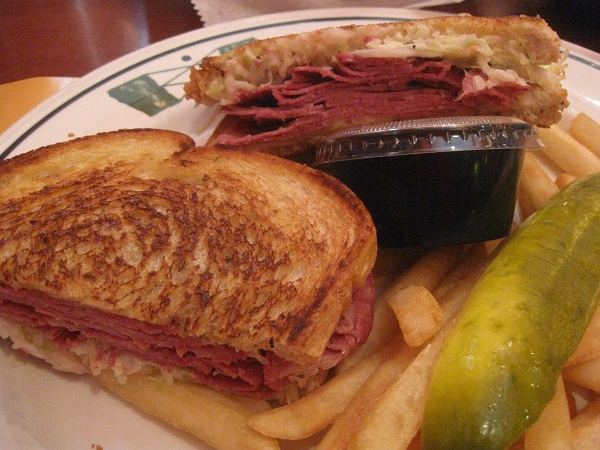 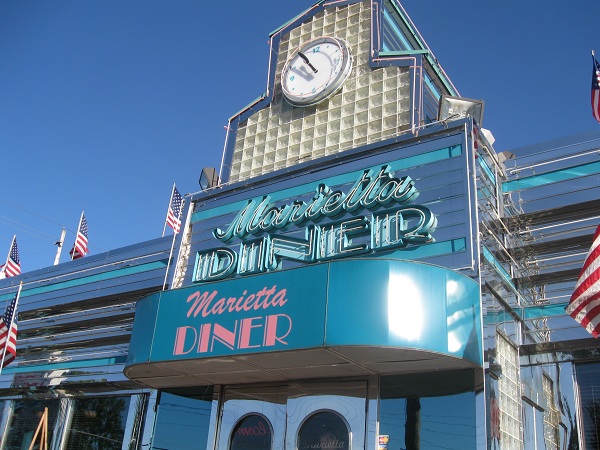 I told my son up front that I’d allow him a gigantic treat from the gigantic dessert menu if he would keep his dinner selection on the cheap side. That’s never easy to do here. With a menu the size of a small phone book, and with a list of daily specials longer than many other places’ entire offering, it’s hard to narrow down what you want and find the right price. Reveling in humongous portions, some of the offerings are somewhat pricier than I might like.

We came, incidentally, because for some reason a few hours before, I found myself having the oddest craving for a gigantic deli sandwich, the likes of which are best found at The Square Bagel. That place is not open for supper, but I found a reasonable facsimile of what I wanted at the Marietta Diner. Called a Sloppy John, it’s a huge stack of corned beef, melted cheese and cole slaw served with Russian dressing and fries. Already satisfied by the spanikopita and the bread they bring to each table, and the salad that I enjoyed, I ended up having half this sandwich for breakfast the next morning.

The salad was a good example of the staff proving how on the ball they are. I had asked for the Greek-styled side salad, but they brought me this unbelievable thing that was assuredly priced higher than the $4-odd on the menu. It was served in a bowl the size of a basketball, featured a towering leaf of lettuce positioned like the feather of a garish headdress, and included several grape leaves and anchovies. It looked terrific, but far more than I could eat! I pointed out the error and it was corrected almost instantly.

My son had a burger, served with fries, a side of slaw and a couple of onion rings, and for dessert, he went up to the showcase and wasn’t seen again for several minutes. Slices of cake here are priced around seven dollars each and are just tremendous. He finally decided on Butterfinger flavor and could not finish it. We ended up taking three boxes home for leftovers the next day.

This place isn’t really for people who are looking for something inexpensive, or sensible portion sizes. It’s all about conspicuous consumption here, and the restaurant’s enormous popularity proves they’re doing right by their crowd. It’s genuinely good stuff, and while I’m hardly a regular here, I’ve certainly never had a bad meal.

Other blog posts about Marietta Diner: