Many years ago, Hot Thomas ranked among my very favorite barbecue restaurants. When I lived in Athens, I would drive over to Watkinsville maybe once a month to get a chopped pork plate. Then I moved away and they hit a run of bad luck and closed for a while. Actually, I sort of found out the hard way, by driving over here on two or three occasions in the 2000s and finding only disappointment where there should have been great barbecue.

They used to be called Hot Thomas Barbecue and Peach Orchard, but I learned from the always excellent Chopped Onion that their peach trees froze and died some years ago. This led to a period where they shut down and then, I think, reopened with different hours, depending on the season. Presently, they’re open Monday through Saturday until 6 pm. This is the sort of thing that might could change. I didn’t want to ask and be thought rude, but the Thomases are getting older, although still just the sweetest, most welcoming and wonderful hosts in the business, and I was a little shocked to see just how feeble Hot has become since I last visited. I don’t know, I didn’t ask, what their long-term plans for the restaurant might be, but it’s probably worth planning a trip sooner rather than later.

Last week, I called and confirmed they’d be open and Marie and I took the baby up for his very first road trip, to Athens. She sat in back and tried to give him a bottle along the way, and he reminded her that Daddy gives the bottle, Mommy‘s supposed to nurse. Then again, he was probably just ready for some stew. Poor kid’s had nothing but milk for sixteen days. 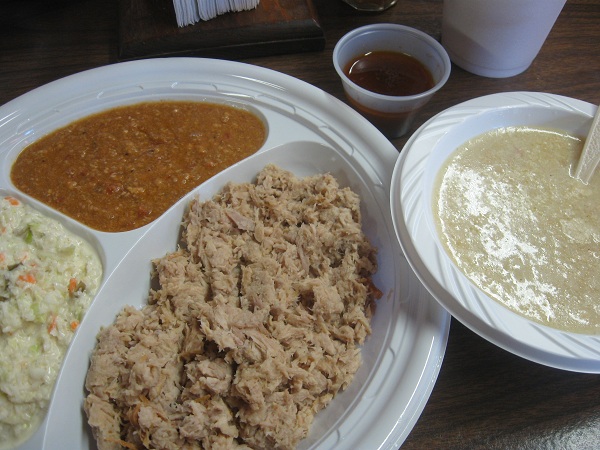 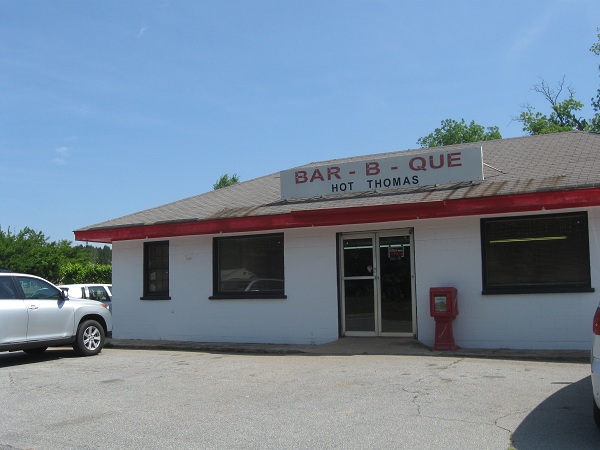 I’m actually a little worried about how time has taken the edge off my memories of this place. On the one hand, even though it had been such a long time, I remembered exactly the sign explaining their six sauces. There are three each – mild, hot and “x-hot” – of a ketchup-based and a vinegar-based mix. I like the honesty of describing that as ketchup-based, rather than tomato-based. Marie had hot ketchup and really liked it. It was thinner than she expected and packed the right punch. I had extra hot vinegar based, which was last used to power NASA’s Saturn missions. I had a little cup of it on the side. I enjoyed a few bites of this wonderful chopped pork, which is moist and packed with flavor, although not especially smoky, and then dipped some meat in the cup. I haven’t had anything that spicy in weeks. Oh, my. This was amazing. I had forgotten just how wonderful everything tastes here.

Proving that I never paid half as much attention to things when I was younger as I should have, you can get chicken mull at Hot Thomas. I guess I saw it on their menu and just never asked what it was when I should have, only learning what mull was years later. Sadly, the mull here is not quite as good as other places in the area that I’ve tried, but the stew – more hash-like than Brunswick – is fantastic, and so is the slaw.

Assembling the perfect barbecue plate will not be difficult if you live in Athens, but it requires three people with cars to go in different directions and bring it back from four places. It’s quite simple. Have one person drive down to Paul’s in Lexington to get the chopped pork. Have another drive up to Danielsville and collect the sauce from Zeb’s and on the way back, stop by Bill’s in Hull for the mull. Have the third member of your team go to Hot Thomas for the stew and the slaw. Heat everything up when your drivers get back and feed everybody the very best meal that has ever been assembled.

This stew was just too good for a baby to miss out on. I dabbed a couple of drops on my finger and let the baby suck happily on it, thrilled to finally have a great new taste. Marie didn’t entirely look upon this with complete approval, probably because no parenting book has suggested that stew should be offered to babies at sixteen days old. Sometimes, it must be said, books don’t tell you what you really need to know.

We left Hot Thomas, hoping that it won’t be the last time, and went back to the other side of Watkinsville to visit one of Marie’s friends and show off the baby. On the way, we passed by the turning for the Elder Covered Bridge. We should probably make another visit to Hot Thomas and swing by there to take some pictures. I love photographing Marie with a covered bridge in the background. Well, anyway, we visited for a few minutes and Marie dropped off some of her amazing banana bread, and then we drove along Simonton Bridge Road into east Athens. We tried again to get this darn baby to have something more than a few drops of stew to eat and he still wasn’t having any of it. 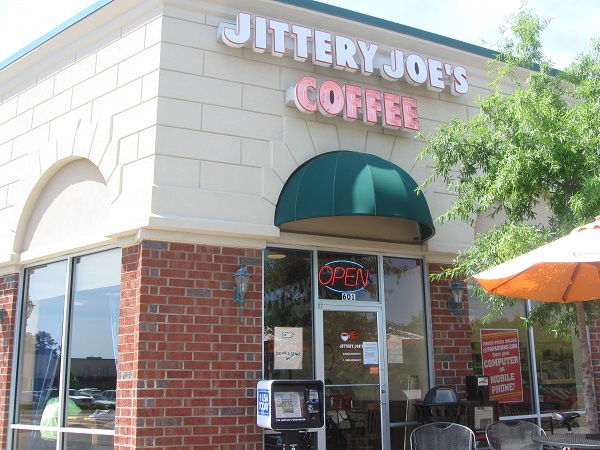 About a quarter to two, we met up with some more local friends at one of Athens’ many Jittery Joe’s locations. This is a hometown coffee shop with a hugely relaxed feel. My favorite location is gone now; the old one in Five Points was where I spent 1999 beating most of my senior paper into shape. Our sixteen-day old son met somebody younger than him, as our friend Eleanor had her second baby just seven days previously. Scott dropped by for just a few minutes on a lunch break, and Paula brought us a wonderful crocheted blanky.

Jittery Joe’s comfortable and relaxed atmosphere makes it a perfect place for people to linger for a good while. They even have old board games! While neither Marie nor I drink coffee, there are plenty of other things to sample. Sadly, they were out of both brownies and the lemon mix for the freeze that Marie was hoping to try. She had a peach freeze instead and Paula had mango. I just had a bottle of Blenheim ginger ale. I figure, any place that will let me sit back on a couch for two hours sipping hot ginger ale while the ladies talk about their babies is a good place. We didn’t spend an awful lot of money here, but it’s a great place to enjoy company and pass the time.

Before leaving town, we visited our friends at Bizarro Wuxtry for a little while and introduced the baby to them. Then we got that carry-out order of fries and feta dressing from The Grill that I was hoping to enjoy the last time we were in town. With Marie sitting in back with the baby, that left the front seat of the car free for me to open up the box and dip and drive. The baby did great; we have a bigger road trip in store for him next month and I hope that it goes half as well.

(Update, 9/2/11: I’m glad that we took the chance to visit again. On Aug. 30, it looks like the pain of his stroke got too great for Hot to bear, and he ended his life. God bless you, Hot, and thank you for giving my boy his first taste of stew. The restaurant remains open in 2012, serving up terrific barbecue, and, hopefully, long into the future.)