At the end of May, Fox News personality Sarah Palin took her family to New York City, where she met with NBC personality Donald Trump before the watchful eyes of sixty-eleven news photographers who wanted to watch the conservative duo chow down at a New York pizza place. Attempting to adhere to the philosophy of there being no such thing as bad publicity, and failing terribly, Trump took the opportunity to show a visiting celebrity one of his town’s legendary pie places. To folk like me, who’ve never visited Manhattan, it looked like he might have done all right. I was quickly informed, by the invaluable Jon Stewart, that Trump did it horribly, godawfully, wrong.

In what must rank as one of the funniest television moments of the year, Stewart, in a vulgarity-spewing tirade, absolutely lost his lemon with just how badly Trump represented his city. If you have not seen these brilliant ten minutes, please look it up and watch Stewart try to be respectful, and fail, as Trump’s list of crimes against pizza grows and grows. Don’t spoil the fun by reading about these crimes before you press play.

I sent that link to Marie a couple of weeks back and she quickly wrote me back, noting that it really had been a while since we enjoyed a proper New York-style pizza. Almost immediately, she had read and asked around and suggested that a little place on Cobb Parkway, south of the Big Chicken and next door to that army-navy store, might be one of the closest things we have to a real, authentic, Manhattan pizzeria experience. I’ve been driving past this place for years and not noticing it, which is not surprising when you consider all the sprawl that buries businesses on this ugly stretch of road. She was right; we were long overdue for a visit. 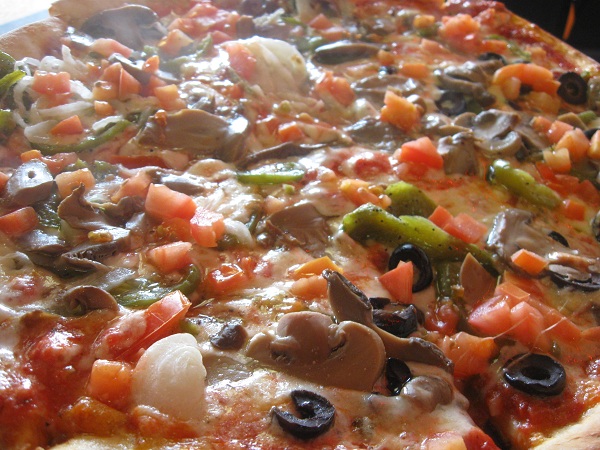 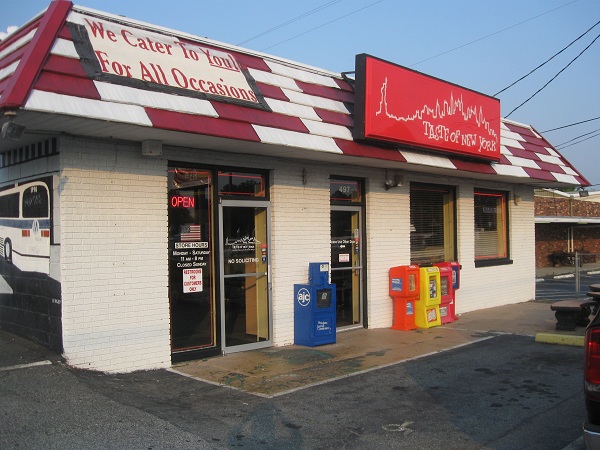 Doctor Who once taught me a lesson in recursive logic. I was reminded of it when I asked the fellow at the register what made this place the most authentic New York pizza place in the area. He answered, “All our customers tell us we are.”

I think that I got a little bit more information from the owner a little later on. Apparently, what you want to see in a New York pizza place is a big counter with pies being sold by the slice. The smell needs to hit you as you walk in the door. You want an even spread of cheese and sauce, a certain curl to the crust, and a conservative but noticeable char on the underside.

Marie and I shared a Primavera-style pizza (mushrooms, tomatoes, peppers, black olives and onions) and I also had a knish, served with two packets of Gulden’s brand mustard. I thought it was pretty good, although I wasn’t mad about the cheese on the pizza.

I particularly liked the really generous pile of toppings that we were given, but Marie found it a little overpowering. Since by now you have all watched that clip from Jon Stewart’s show, I’m not spoiling anything by saying that my eyebrows raised as Marie got up and fetched a knife and fork to tackle her slice. Having been instructed by Varasano’s some years ago how to correctly hold and eat a slice, I wasn’t surprised when Stewart really blew his top about Trump eating pizza in New York with a fork, and told Marie, with a smile and a tut-tut, that Stewart would surely not approve of how she was eating.

“There are too many toppings on the pizza,” said Marie, “and Jon Stewart can bite me.”

Personally, I thought that a bit harsh. We wouldn’t have even been enjoying this particular pizza without him!