Once upon a time, I wrote a letter to Pappy Red, though I am pretty sure he never saw it. No, I just left an open letter on a blog I once wrote, thanking him for the many good meals that I had enjoyed at the since-closed location up in Cumming, but sadly informing him that while I enjoyed the barbecue a good deal, my pipes were no longer processing it right. Something about it was giving me quite unbelievable heartburn. Oh, it was rough. Well, I’m in a little bit better shape than I was nine years ago. I eat better, drink less and walk more. Plus, I keep a small supply of antacids in the console of my car. Maybe I could try this barbecue again?

Incidentally, there is a little confusion about this restaurant’s name. Both the main sign and one of the two neon ones in the window call it “P.Red’s,” but the fellow with the sandwich board up at Howell Mill and the other neon sign read “Pappy Red’s.” I double-checked with the owner, whose grandfather was the “pappy” in question, and he confirms that the signs are only spelled that way to save space. It is still “Pappy Red’s.” Desperately glad we got that critical point cleared up, aren’t you? 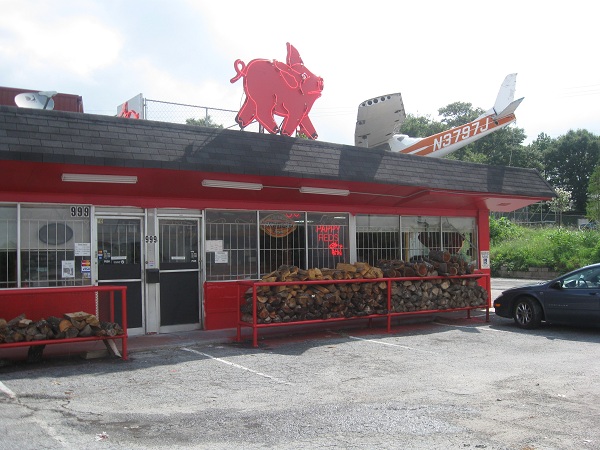 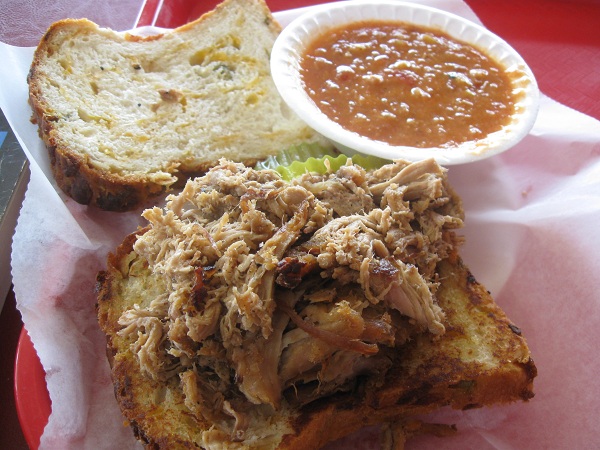 While the stretch of Howell Mill just below it has a reputation for being one of Atlanta’s most celebrated food corridors, the roads that connect it with with Marietta Street are some ways off from being brought back up to code, as it were. Both Chattahoochee, and Huff, about a mile south, are old and ugly eyesores, full of direct-to-the-public warehouse distributors and moderately interesting old bridges above railroad tracks. The asphalt is worn down by heavy industrial traffic. Pappy Red’s moved into some old, long-unused restaurant space with bars on the windows and a celled box around the air conditioning unit.

The counter service here is sharp and friendly. I ordered the pulled pork sandwich on jalapeno bread, making sure to ask for it dry. They don’t cook in the sauce here, but they will drown your meat unless you specify otherwise. The pork is pretty good, and, arriving a few minutes before they opened and sitting outside with the windows down, I drank in the wonderful smoke from out back, proving a tasty appetizer.

The jalapeno bread was almost as much a treat as the pulled pork. Ordering barbecue on this bread is a must; it is chewy, spicy and delicious. While the pork is still a little greasier than I would prefer, the lower slice of bread seemed to soak up a little bit of it and made my meal taste that much better. There are two table sauces, mild and hot varieties of a brown ketchup-vinegar mix, and both are very good.

I had some Brunswick stew and was really pleased with it. It’s heavy with onions and pepper and comes out extremely hot, so guests may wish to dip saltines in it as it cools. It reminded me of the peppery concoction that I enjoyed at Lively’s Owens BBQ in Cedartown a couple of months earlier.

It is a shame that Pappy Red’s couldn’t find a space on Howell Mill itself, where it would be more likely to get more attention and notice, but honestly, whether you’re either working in the area or wanting to sample inside-the-perimeter Atlanta barbecue joints, it is definitely worth a visit. And wouldn’t you know, I didn’t have a drop of the old heartburn and didn’t need an antacid after all? Either they’re doing something better than they once did, or it’s a testament to better living and healthier eating that a meal here didn’t leave me gasping. Either way, I was very pleased.

Other blog posts about Pappy Red’s: