At the end of July, Marie and I made our first overnight trip without the baby. We made our annual trek to Asheville for Bele Chere, a festival of music, artwork, street performers and overindulgence. This was our third trip and we’re already looking forward to next year’s Bele Chere, in part because our visit didn’t allow us time to see the acts that we most would have enjoyed this time around. Last year, the act that I most wanted to see – Grace Potter and the Nocturnals – was scheduled for Saturday night and we only booked a room for Friday. This year, it was the other way around and we missed The Whigs on Friday night, darn it.

So, with record heat and humidity for the second Bele Chere in a row, and about a quarter of a million people celebrating and sweating, Marie and our daughter and I split up to go shopping and enjoy the chaos. My first order of business was to get something to eat. There are about five restaurants in downtown that I have wanted to try, and I knew that I would be visiting at least two of them. My first pick, Salsa’s, left my list after I actually looked over their menu and got sticker shock at the prices. So I walked over to Havana Comida Latina on Battery Park. I’ve been curious about this place for some time. Until recently, an amazing used bookstore was in the space next door, but it has since moved to the nearby arcade. 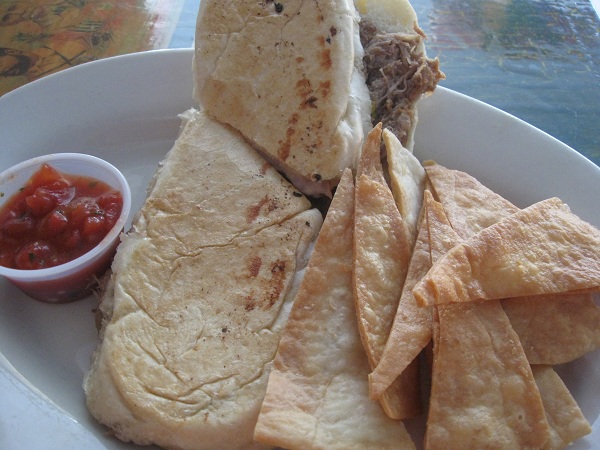 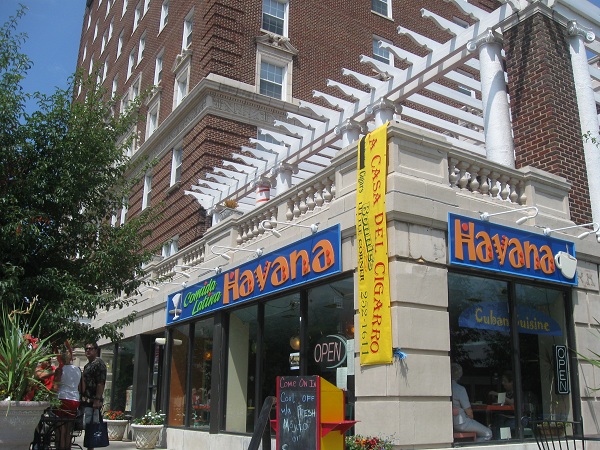 I’m afraid that Havana courts considerable controversy over the authenticity of its menu. Admittedly, I’ve not tried very many Cuban restaurants, and can’t weigh the experience against too many other contenders, but you won’t have to look far online to find Cubans and South Floridans expressing displeasure over this place’s recipes. Not knowing that there was even some dispute over where the owner was born, it did not occur to me to just ask him, but to hear online reviewers tell it, it was any randomly-selected republic south of Guatemala.

For my part, I had a simple Cuban sandwich and, honestly, I did not enjoy it quite as much as the ones at Papi’s here in the Atlanta area, or Kool Korner in Birmingham. That’s not to say it wasn’t good. It was filled with juicy pulled pork between ham and cheese, with mayo and mustard and pickles on a pressed roll. It was certainly a really good sandwich, and came with a curious little side of chips and salsa.

Now, the salsa was nothing special, just standard red stuff, but the chips were not at all like the usual stuff-from-a-bag. Looked to me like they fried these thick chips up in the back. I added a couple to my sandwich for a yummy extra crunch.

Now, whether or not this place is really all that authentic, there’s an extra touch in the back that I thought was really cute. There’s a little shop that sells coffee and cigars, and a smoking room with leather couches and a big screen TV, with decorations of Marilyn Monroe along the walls. There are several framed photos and a poster of one of her films. Personally, I don’t smoke and don’t want to be around it, but if I did, this looks like an incredibly comfortable room to kick back and get away from the chaos.

But that was the last thing that I wanted to do. There was a whole crazy festival to enjoy, and I had to catch up to Marie to take her to lunch. More about that on Sunday!

This is the 300th chapter here at Marie, Let’s Eat! We’d like to thank all our readers for making this so fun and such a success. Happy eating, y’all!