Here’s a first for our blog. Today, I’m writing about a restaurant where I did not get to eat. Before anybody harrumphs about any lack of journalistic integrity, however, it is a place where I have eaten previously. About four months before we started the blog, Marie’s father took us to dinner at Blue Water, a nice casual American restaurant on Mallery Street in the last building on the right as you’re approaching the Saint Simons Pier. On that occasion, I had the Mardi Gras pasta and really enjoyed it.

I was considering having that again when we revisited Blue Water a few Fridays ago with Marie’s mother and brother, but I had not decided. The menu here is a little dense with choices, and the prices are a little on the high side. The restaurant is quite nice, with a really fun design. Sure, any place can order all sorts of “vintage” tin signs for their store. Heck, we’ve got a Ted Williams Moxie ad in our kitchen. This place, however, has found gigantic antique metal signs from all over the place – shipyards, railway stations – and decorated their wood-paneled interior with these and high-end bric-a-brac like the huge brass instruments from old steamships. A fellow could get lost on the way to the gents’ studying all the ephemera packed inside.

We had ordered drinks and were getting ready to order. Then our baby did something completely unexpected and new. He pitched a complete tantrum in the restaurant. He never does that. There weren’t many other diners yet – we had, disagreeably, gone out a little earlier than I would have liked – but I believe that it’s a parent’s responsibility to remove a screaming kid from any place where anybody is trying to enjoy some peace and quiet. I decamped with the baby, so that Marie could enjoy the meal with her family, asking her to find me at the guest house after a while. I’d eat later.

Before the baby and I left, I had been considering either ordering the ceviche or another round of that pasta dish that I had on my previous visit. Perhaps next time! 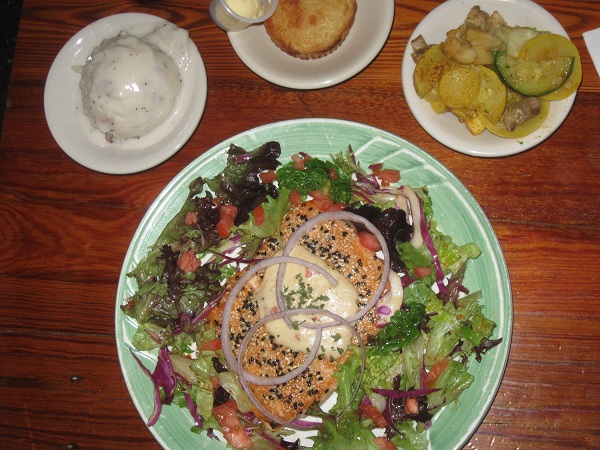 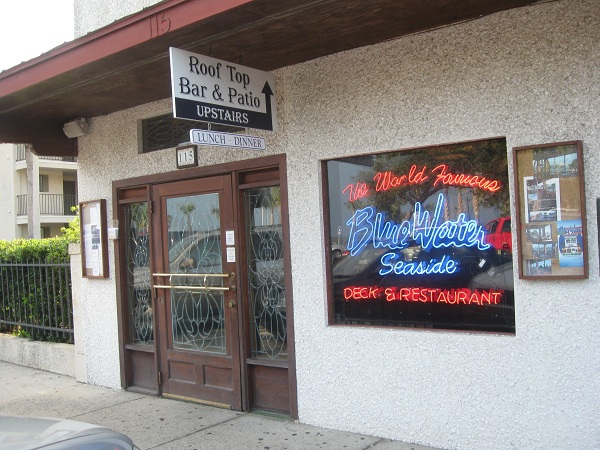 Marie reported that she had the chicken breast sandwich and that it was very good, quite juicy and messy. My daughter and Marie’s mother each had the loaded baked potato skins, and liked them. Karl, however, probably had the best meal at the table. He had the seared salmon and said that it was really good.

Anyway, I walked back to the guest house while the baby yelled and hollered and attracted as much attention as he could. I shouldn’t have been surprised. He usually has some sort of tantrum, volume variable, in the early evening, maybe six nights of seven, and we typically eat after he’s nursed and calmed down. I call it “the witching hour.” We had completely wrecked his schedule with the long car trip. He slept through almost all of it, stirring only to nurse at that convenient rest area about 44 miles down I-16, and then we blew his mind by taking him swimming for the very first time in the afternoon. No wonder the poor baby was freaked out and exhausted. He yelled and kicked back at the house for about ten minutes before zonking completely out, and slept on my chest for another hour or so before Marie returned and we went out to get me something to eat.

Rather than return to Blue Water, I decided to just go for something quick and reliable. Barberitos is a chain of assembly-line burrito places that started in Athens and has been slowly growing throughout the southeast. They have only made baby steps into the tough Atlanta market, with stores in Buford and Roswell, but they have fifteen stores in other Georgia cities, along with two each in North and South Carolina and one in Johnson City, Tennessee. 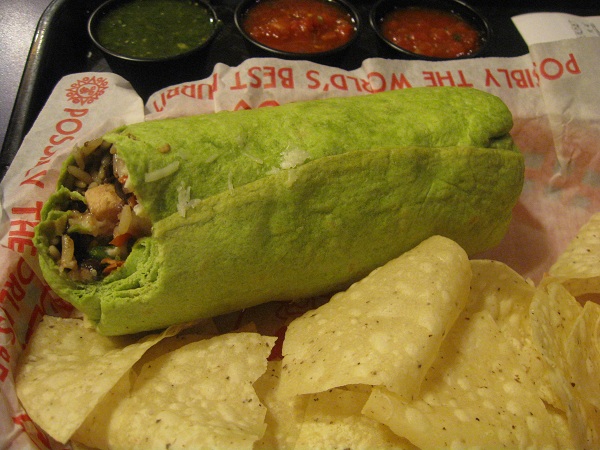 Well, I say “reliable,” but this particular franchise, despite its late hours and very close proximity to Marie’s father’s house, is anything but. On one occasion, Chris came up from Jacksonville to visit with us. We ate here and the seeming-baked dudes working the counter conspired to burn the chips of my order of nachos three separate times. We hadn’t quite hit the “comedy” stage when I finally gave up and agreed that the two black splotches on the chips on the third try would do. Left me a little grouchy, that did.

So the gimmick at Barberitos is that the burritos here are available in three “sizes.” The basic one is called a skinny. Add guacamole and it becomes a fatty. Add lettuce and sour cream and it’s a heavy-D. I usually have a skinny with chicken on a spinach burrito and it’s always quite tasty, even if, as I’ve noted in this blog recently, I am slowly losing my taste for this kind of meal. The vegetables taste very fresh and the meat is cooked just right. It’s good food, but I just don’t get excited by it any more.

They throw in chips and have the requisite salsa bar, and this, I really have lost my taste for. I swear that the tomatillo sauce at the stores in Athens used to be thicker and tastier than this. While the watery green goo here might be local bungling, it must be said that the red sauce at every location I have visited has enough cilantro in it to trick you into thinking that the little bubbles are actually leftover dishwashing soap.

Interestingly, Barberitos is a survivor of a little craze of burrito joints that swept Athens in 1998-2000. They started up at the same time that Z-Teca – later Qdoba – and Moe’s moved into town and at least three other locally-owned places opened. One of them was called Extreme Burrito and was in that strip mall on Baxter Hill where the coin laundry is, and another was in that strip mall over by Cedar Shoals near the Christian bookstore and the Subway, and I forget where the other was or what it was called. Oh, and the midwestern La Bamba chain – the “burritos as big as your head” guys – opened a store on Broad downtown that didn’t last, but I had a really good date there once, so it gets a pass in my nostalgia. Barberitos, unlike the cobbled-together mess of Extreme, seems to have been planned from the outset as something intended to grow and be corporate. The store on Saint Simons can justifiably be accused as taking their eye off the target once in a while, but for inexpensive after-hours nosh, it’s not at all bad for what it is.