Not content with confusing me with the long and involved story of Terry Gironda and all the restaurants that she’s owned on Saint Simons Island and in Brunswick and all the names that keep changing, Marie’s father took the initiative to confuse me further. He suggested that I tell you good readers that he “bored” me further, but I figure that if I were to print that, no matter how many disclaimers I used, the same sort of humorless bozos who thought that I was being negative about Atlanta’s Antico Pizza would be up in arms about how tactless it was to accuse my father-in-law of boring me. Especially in light of me spending two of the previous three chapters teasing Marie about where we’ve eaten on the island anyway, it just strikes me as a little wrongheaded.

Anyway, I’ve met Terry a couple of times, briefly, and now get to wish her well in a retirement that I’m not entirely sure will last for all that long. She seems to be the sort of person who needs an outlet for an awful lot of creative energy and a desire to make food. She has passed her restaurant on Mallery Street into the hands of her son C.J. and now he’ll be responsible for making certain that the islanders and tourists continue to get CJ’s very good pizza and pasta dishes, along with the unbeatably good breadstyx and the excellent salads with their killer sweet-and-sour dressing.

But C.J. has made a few changes to the menu, and one of my father-in-law’s favorite dishes has been downgraded to an occasional special. The dish, Pasta Luigi, was expensive and just didn’t sell well enough to remain a regular. So a couple of days before we were due to have supper here, my father-in-law went to say hello to C.J. and made certain that we could get some Pasta Luigi. While we don’t often write about a place twice, I think that I’ll use this space to report on our meal, and encourage all of my readers who vacation on the Golden Isles to speak up and order this treat, because it’s really good. 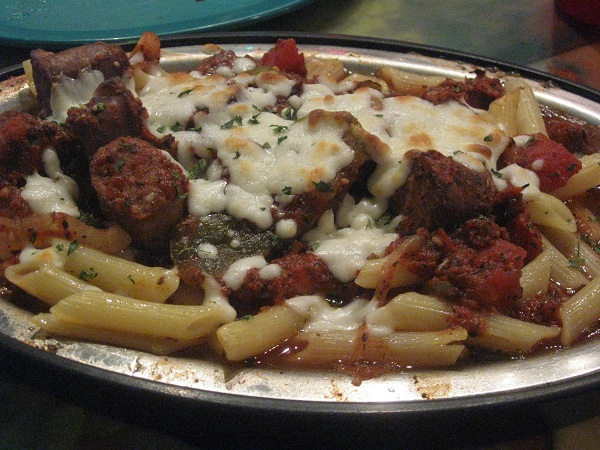 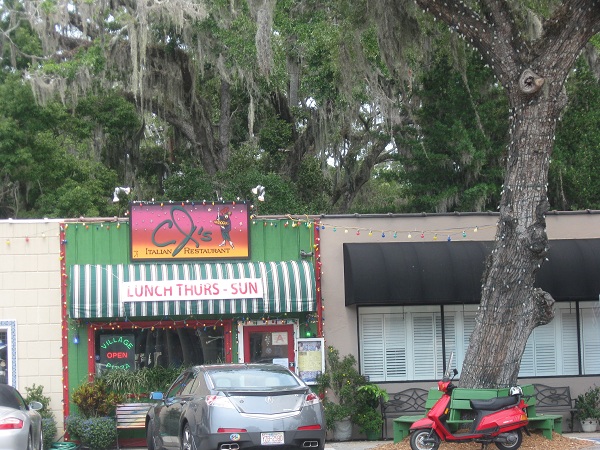 CJ’s is a simple, popular and crowded place. The interior is a dense collection of bric-a-brac and graffiti. It’s busy, but so incredibly relaxing and laid-back that a song that I detest by Shawn Mullins, a zero-energy Laurel Canyon tribute called “Rock-a-Bye” that was unaccountably popular around 1998, came on while we were eating and I strangely found it appropriate and comforting. It just has the perfect vibe for this incredibly mellow restaurant.

Actually, there, I just stumbled right over it. Do you remember what the original Mellow Mushroom pizza places in Atlanta were like, in the mid-80s when there were only about three of them, before they started franchising and they started feeling forced and corporate? CJ’s is kind of like one of those.

As for the special that we went to try, Pasta Luigi is a baked dish with a tomato sauce that reminded me slightly of The Mad Italian‘s pasta fagioli baked over penne. It is a thin, spicy red sauce with chunky tomatoes and peppers. It might have stood to have been baked just a couple of minutes longer and thicken up just a bit more, but I certainly enjoyed sopping a little of it up with the breadstyx. It is definitely a dish that guests should ask for!

I certainly wish all the best for C.J. and hope that he continues everything that has made this restaurant such a popular success. And happy retirement to Terry, as well!

(Read my original post about CJ’s by clicking this link.)