(With apologies to my many visitors from Google, this is one of the occasional entries here on the blog where it takes me a very long time to get to talking about the restaurant titled above. This isn’t a conventional restaurant review blog, after all, but rather stories about the fun that we have eating. Sometimes, the research that finds these places to eat sparks its own story.)

The only thing that I dislike about our trips to Saint Simons Island is that we occasionally have to return on a Sunday. Our experience has been that just about any place worth visiting in middle or south Georgia is closed on Sunday, and it sure is a shame to drive past an interesting-sounding restaurant and not have the chance to visit.

We’ve also been thinking about what it will mean for our traveling should we successfully make a move to North Carolina in two years. It will mean, for starters, that we might never see I-16, that hideous, dull stretch of highway between Macon and Savannah, ever again, except for driving over it on I-95 and sticking out our tongues as we pass. More directly, it will mean that while we are enjoying visits and stops in middle Georgia now, our chances to visit cities like Columbus and Macon and, in fact, most of Alabama could be coming to an end as the reasonable travel radius around us shifts. We will still be visiting Saint Simons Island to see Marie’s family, and thus get new chances to see what all we can find along I-26, Columbia and Savannah, but that stretch of I-75 between Atlanta and Macon, and all those towns along the Golden Isles Parkway, we might conceivably never see those again.

So I visited Urbanspoon to start setting up a little research. I wanted to find as many neat restaurants and barbecue places as I could, hoping that we could put together a little wishlist for future traveling. What I learned was pretty stunning. I figured that there could well be places ten or twelve miles off the interstate that I just did not know about that were open on Sundays. But almost every potentially interesting restaurant that Urbanspoon located had just a minimal entry, with no blog posts, no user reviews, and no posted hours of operation.

This surprised me at first, until I considered it. In the Southeast, really only users in Atlanta, New Orleans and Miami seem to use the heck out of the service. It’s not at all like the Pacific Northwest, where a food truck in Victoria can’t lose a lug nut without it being reported by somebody’s blog. As of today, only three of the “contestants” in Urbanspoon’s top 25 are outside that region, and only one, the always-readable Cynical Cook, is from the southeast. He manages the overall top 25 by being one of the top bloggers, with quite a few entries, in Atlanta, New Orleans and, oddly, Jackson, where he might well have eaten at every single restaurant in that city. That sort of market domination, here in the Southeast, is the only way to climb the overall Urbanspoon rankings. I mean, heck, we’re number one in Gainesville GA right now, with visits to a whopping six restaurants, not that it impacts our overall numbers much.

Now, I believe that Urbanspoon filled its initial restaurant data by importing it all from the Yellow Pages or something in 2004 and has waited for users to submit field reports ever since*. As very, very few people in this region use it all that much – updates about new or closed restaurants outside Atlanta are few and far between, the site being called “Urbanspoon” and not “Barbecuerestaurantsinthemiddleofnowherespoon” – there are many entries that have never been revised to show that a business has closed. So before we left for the island, I sat down with Google Maps in one tab and Urbanspoon in another and started phoning businesses: restaurants that, at one time, were known to serve barbecue but only had a skeleton of data in Urbanspoon’s system, to check their hours. The overwhelming majority of the ones that I called had shuttered.

But as I say, the rural Georgia market doesn’t get much blog love. “Urbanspoon Georgia” is that collection of restaurants outside of what the service considers the state’s ten major metro areas (Albany, Athens, Atlanta, Augusta, Columbus, Dalton, Gainesville, Macon, Savannah and Valdosta) and our blog is the runaway leader in those that cover this “region.” Our only real competition, so far, is from a very good blogger based in Tallahassee, Sweet Tea & Bourbon, who collects a few Georgia restaurants, principally in the Thomasville area, from time to time. Our paths just don’t cross much, however, and almost nobody else is really working the circuit. My ego kind of likes being far out in number one, especially since my habit of visiting utterly unloved Atlanta restaurants like Jiffy Freeze and Frankie & Johnny’s sort of makes a top ten placing on the Atlanta leaderboard a struggle, but a little healthier competition would assuredly result in more internet traffic to these rural Georgia restaurants, and, in turn, more accurate Urbanspoon listings.

At any rate, having determined that every barbecue restaurant along the planned travel corridors south of Macon is, indeed, either closed on Sunday or shut for good, I looked into the Savannah suburbs and, finally, found a place to eat in Richmond Hill near the interstate. It is called Smokin Pig, and since we will probably still be using I-95 for a long time to come, I’m glad to report that it is really wonderful. 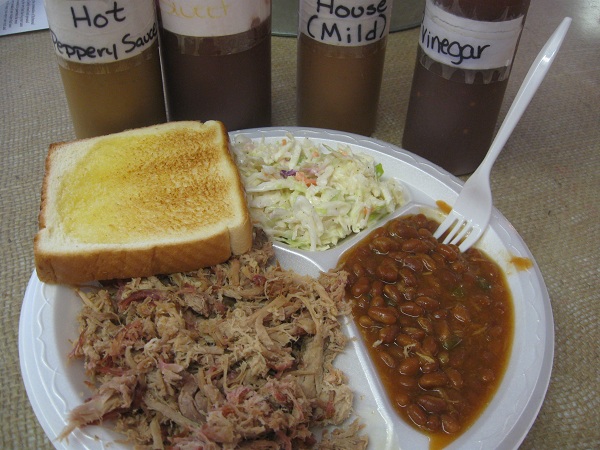 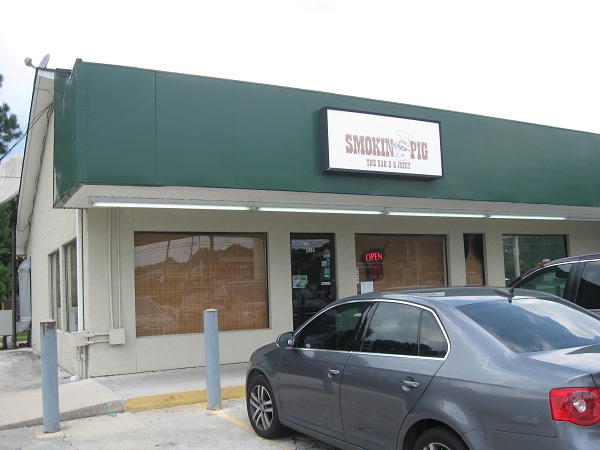 We had a devil of a time finding the place, sadly, thanks to some dimwitted hiccup at Google Maps. Coming from the south, visitors will take a right, as the restaurant is just to the east of the highway, sharing a building with a BP/Amoco station. We arrived in the very early afternoon. Marie had taken the baby to church with her mother that morning so that the proud grandma could show him off to her friends, and so we were later leaving the island than planned. Fortunately, we made it before they closed. The dining room is fairly small, with room on the walls for trophies and news stories celebrating the restaurant’s short history.

Smokin Pig, which has two locations in the area, is owned by Clyde and Kevin Fabre, and I understand that they’ve been smoking on the circuit for some time. Their house sauce is a South Carolina-style mustard sauce, in both mild and hot varieties. They also offer a vinegar sauce and a thicker sweet sauce, but the mustard is where it’s at, here.

Still stuffed from breakfast some hours previously, Marie just had a chopped pork sandwich and was very pleased with it. Our daughter had a bowl of Brunswick stew, but I didn’t get to have a taste before she decided it would be improved with a very generous squeeze of the sweet sauce. Blasted child. I had a chopped pork plate with slaw and beans and loved it all. I even liked it better than the celebrated Southern Soul, which we enjoyed for lunch the previous day. Isn’t that just typical? I waited four years for a meal there, and while I enjoyed it immensely, I preferred a little unassuming, unhyped place that I had never heard of, and found only after a lot of internet hunting, even more. Southern Soul, by comparison, is a lot smokier and sweeter than this. It’s terrific stuff, but Smokin Pig’s milder taste is just a little more to my liking, and the amazing mustard sauce complements it perfectly.

This gives me a little encouragement about what more we’ll find in a couple of years when we begin stopping in Savannah a little more frequently. There are plenty of small towns in the surrounding area to explore, and a surprisingly high number of restaurants on Tybee Island, which I recall, from visits a decade ago, as being very fun. Actually, we plan to be back in Savannah proper in November, when we finally visit Mrs. Wilkes’ Dining Room just like everybody else with a food blog does. Probably have to swing by Lady & Sons at some point, too, I suppose. We’ve got all the time in the world, though.

I would totally kick all kinds of tail on the rankings of Barbecuerestaurantsinthemiddleofnowherespoon, you know. More on this subject next week, after we return to the Atlanta area for a couple of chapters, and then get back on the road to rural northern Alabama.

(*Actually, it had to be even earlier data than that. Shortly after finishing the first draft of this entry, I decided to start cleaning up the listings of Atlanta’s barbecue restaurants. Urbanspoon had dozens of wing joints, most of which were closed, listed as “barbecue” rather than, say, “chicken” or “fast food” or something. As I was going through alphabetically to clean these out, phoning places to see whether they were still in business, I noticed a listing for Holt Bros. in Norcross. Heck, The Gentleman’s Guide to Swine Dining in Georgia had that place listed as closed even before I started my old Geocities page more than ten years ago.)