I have been driving past O.B.’s for many years, not knowing that it is the last remaining store in a failed expansion into the suburbs of Atlanta. Similar in a way to The Mad Italian and Old Hickory House, the large store in McDonough is the only thing remaining from an attempt at growing that just didn’t take. There used to be three more locations, including one further south down I-75 at that Tanger Outlet Mall in Locust Grove, and one in south Cobb County, near Mableton. This store was sold to a new owner in 2010, who renamed it J-Bones. Well, there’s something else to investigate further.

I first spotted O.B.’s in 2004. If you’re a longtime reader, and actually remember recurring jokes that have not recurred in many, many entries, you may recall that I regard 2004 as a mistake-filled year. One of the few things that I did that year that was not at all a mistake was popping down to visit a friend in Macon a few times, and I noticed the restaurant then. So this is slightly better than seven years now, and I finally stopped in. I plead “other barbecue restaurants” in my defense; the same exit (218) that a driver would take to get to O.B.’s would get you over to Southern Pit in the other direction, for example. Plus, you know, there were usually restaurants in Macon awaiting me.

At any rate, confirming that O.B.’s is one of the criminally few barbecue restaurants in middle Georgia that’s open on Sunday, it has been on the backlist for whenever travel plans forced us onto the road then. Our most recent visit to Saint Simons saw us coming home then, and so we stopped by for an early supper. 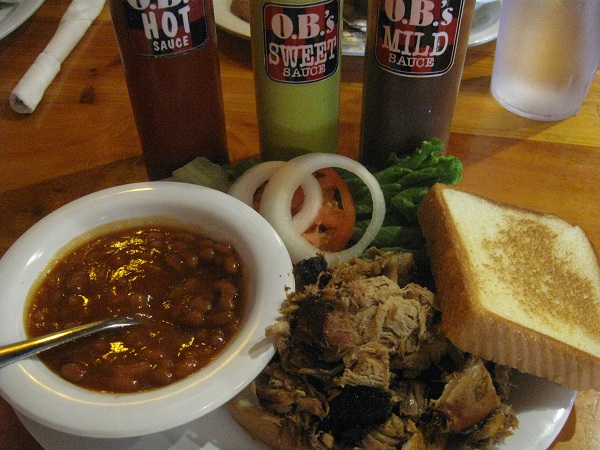 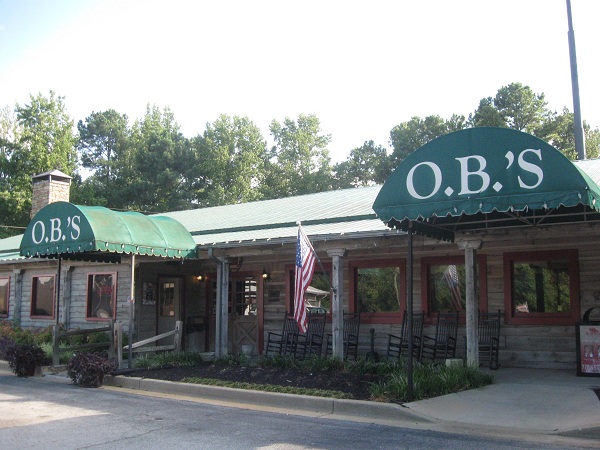 Travelers can’t help but notice O.B.’s, because they made the good choice, many years ago, to build on a frontage road parallel to I-75 and erect a huge, interstate-friendly tall sign. Many years ago, O.B.’s was called Outback’s, but apparently some legal grumbling came from the direction of that big chain restaurant, the one sponsors what I’d like to still call the Hall of Fame Bowl. (Similarly, the December 31st game in Atlanta is still called the Peach Bowl around my TV.) A bit of cheeky nose-thumbing comes from a slogan beneath the restaurant’s name: “Real Pit Out-n-Back.”

Inside, it’s really not possible to eat without getting the vibe that this restaurant’s glory days are behind it. It’s nowhere as bleak and decrepit as Dunwoody’s Old Hickory House, mercifully, but it was only a fifth and maybe a quarter full on a Sunday evening. There were several young servers around, being a little bored and idle. The bright, shiny, corporate-designed menus really drive home the point that this place used to have fellow stores. I’m not sure what this place did wrong, because the food is really quite good. Many places around Atlanta have made a bid for expansion, and I think the pork here was certainly good enough to warrant the effort. Perhaps the other stores were just mismanaged or something, because this isn’t at all bad.

I just had a pork sandwich on Texas toast. This comes with lettuce, tomato and onion, and of course, these aren’t necessary for a barbecue sandwich, but I figure I needed some vegetables. Honestly, this was the least of the three barbecue meals that we had that weekend, following Southern Soul and Smokin Pig, but that’s not a fair comparison, because those other two places were downright amazing.

The meat here was smoky and juicy and stood out as better than many other places that I have tried. The beans were good, and the Brunswick stew was quite excellent. I can’t honestly rave about it quite as much as 3rd Degree Berns, one of my absolute favorite barbecue writers, did, but it’s nevertheless very good stew. The three table sauces are all variations of the same somewhat thick brown tomato-vinegar-pepper mixture, in mild, sweet and hot versions.

Was it worth a seven year wait? Probably not, and some grouchy online reviews suggest that this pretty good meal was even better years ago. Did O.B.’s take their eye off the ball when they expanded, or have things improved again now that they have consolidated from four locations to one? I’m not certain, but I’m glad this is available for travelers to find so easily. Honestly, if you’ve only time for a quick stop just off the exit ramp without a lot of detour and hunting, then I can’t think of a better place right by the highway between Atlanta and Macon. I hope that they weather their downsizing well enough to last a lot longer.

Other blog posts about O.B.’s: