In a recent chapter, I noted how my interest in out-of-the-way and unheralded restaurants occasionally leads me pretty far away from the trendiest of local places. But it’s good to keep an eye on what’s going on in town and check out what people are buzzing about. I don’t get to the hawt new restaurants all that often, particularly the tableclothed ones, and I’m sometimes disappointed that location means as much as it does to some regional reviewers. Would LeRoy’s Fried Chicken be getting all this attention if it was on the Square in Marietta? Almost assuredly not.

Anyway, sometimes I go eat somewhere because it’s where all the cool kids are going.

They’re also complaining a lot. Since opening in June, Chef Julia LeRoy has evidently been having consistency issues. Either that, or a fickle public is complaining overmuch about prices, long waits, and a lack of parking, and this and that. So I knew going in that this might not be a successful visit, but I crossed my fingers and hoped for the best. I’m glad to say that it worked out just fine. 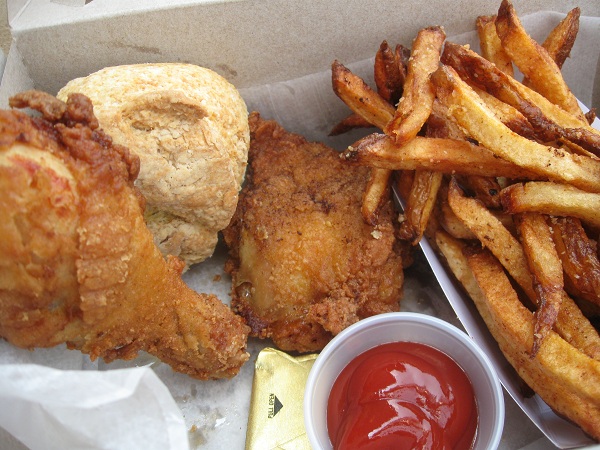 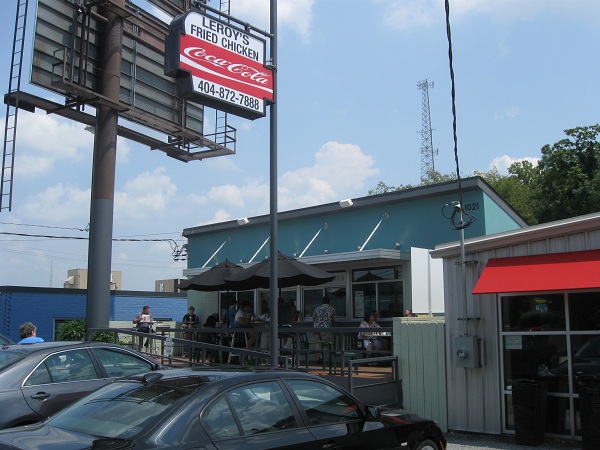 I had a mid-length shift at work letting me out after 12:30, and so I had a couple of backup plans in case LeRoy’s was too crowded. Fortunately, there was still one space in front to park. (Unfortunately, it’s a complete nightmare getting back out onto Howell Mill, especially when a big truck is five hundred feet ahead, blocking the lane while unloading!) It’s all outdoor seating here, with only seven tables. Yes, there is a wait after you place your order, as the chicken, locally raised from Springer Mountain Farms and cooked in lard, is fried to order. They were finishing up a few other guests’ orders as I waited for perhaps eight or maybe nine minutes for my food.

It looks like they have heard guest complaints about the fairly high prices here and have offered a few “combo meal” options. I had two pieces of dark meat, fresh-cut fries, a biscuit and a bottle of properly sugared Coke from Mexico for just under ten bucks. Prior to assembling a few specials for their guests, the cost would have been nearer to twelve. I’m not quite sure what the complainers are comparing these prices against to find room to argue. It seems to me that most really good lunches in the area are going to run around this price.

I think that there’s simply a stigma against high-priced fried chicken, as public perception of fried chicken is something consumed in mass quantities from mediocre chains at a low price. “Feed your family” pricing at places like KFC have just dominated peoples’ concept of what good chicken should cost, I guess. I found this to be a very fair price for excellent food. Admittedly, I really don’t order fried chicken very often, but this was among the best that I can recall having lately. The meat was very tender, and while it was greasy, it was not disgusting. However they are prepping this chicken, they have absolutely nailed the mix of really moist and juicy meat with a crispy, crunchy crust. It was, flatly, as far removed from the food available at a Church’s as a really good burger is from a Wendy’s. The fries were also very good and nicely salty. The biscuit was buttery and crumbly. They thoughtfully included an extra little pat of butter. The bread doesn’t need it, frankly.

Incidentally, I’ve been wondering about the inclusion of Mexican Coke on the menu. It’s among several interesting bottled drinks like Cheerwine. I’ve been seeing this more frequently, buzz restaurants getting praise and attention for taking the extra step of ordering Coca-Cola with sugar instead of cane syrup. Sublime Doughnuts has been getting that in lately as well. I wonder whether this is having any impact, anywhere? Is some distributor reporting to his superior about how more of these trendsetting places are refusing to take the local corn syrup stuff and getting sugared Coke in from somebody else?

Anyway, I’m glad that I waited until it was just cool enough to make this place worth a visit. If they were stumbling when they opened in June, they’ve certainly got it together now. It’s a delicious and fine treat that I enjoyed a great deal. Sometimes, the crowd knows what it is talking about, and sometimes a good restaurant like this can address public grumbling with excellent results.